This recipe for vegan lemon blueberry muffins is adapted from Zsu Dever‘s new cookbook with Vegan Heritage Press, Aquafaba: Sweet and Savory Vegan Recipes Made Egg-Free with the Magic of Bean Water. (Toward the bottom of this post, right before the recipe, I’m giving away a free copy of the cookbook to one reader.) 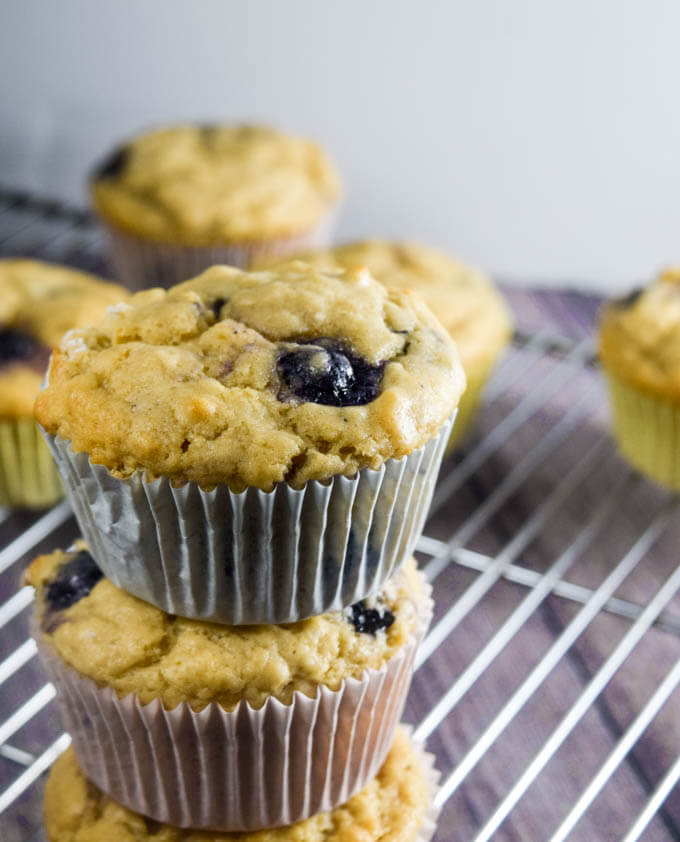 For the uninitiated, aquafaba is the cooking liquid of legumes – that goo you used to strain out when opening a can of chickpeas. The proteins in it have binding and stabilizing properties that are pretty eerily similar to those of eggs. And in the final cooking product, be it savory or sweet, you really can’t taste beans. As such, aquafaba has become an incredibly popular new egg substitute and Aquafaba is an introduction to many of the different things you can do with it.

You may have seen aquafaba pop up on Yup, it’s Vegan before: I used it as a binder and tenderizer in my vegan snickerdoodles recipe; as the egg substitute that finally made my vegan cake batter blondies the perfect crispy-chewy texture; as the binder that held my Brussels sprout tater tots together; and as the ingredient that makes my roasted red pepper white bean hummus a dreamy light texture. See? Aquafaba can do a lot! 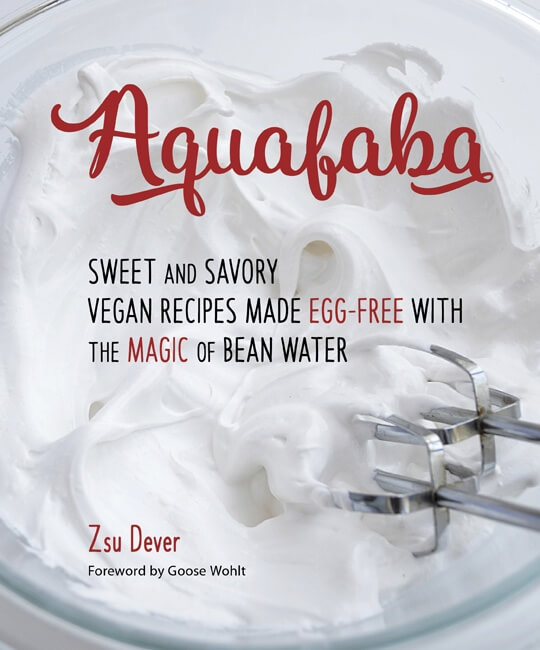 In her book, Zsu takes us through a tour de aquafaba:

There are recipes for condiments and dairy substitutes that use aquafaba mostly an as emulsifier. Oftentimes such recipes, sans egg, would use carrageenan or lecithin instead, which I know some of you avoid eating. There are breakfast recipes, which mostly lean sweet, including frittata and French toast. Lunch and dinner recipes range from quiche, to meatless meatballs, to breads (brioche!). 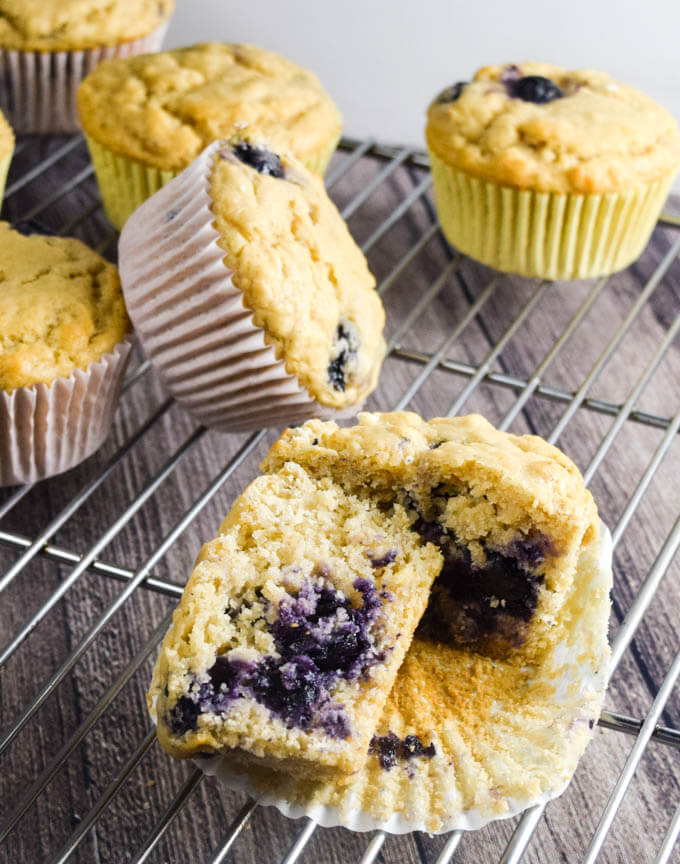 And then there are desserts. Oh, the desserts! Divided into options that do and don’t require the oven, you can find everything from ice cream to nougat to pound cake here. The selection is really fantastic. Finally, there’s a chapter on aquafaba-less chickpea recipes. The idea is that you can use the recipes with the chickpeas that you had to cook in order to get aquafaba. I could take or leave this chapter, it feels a little bit like filler material to me. Plus some of the recipes in that chapter have a ton of ingredients, when one might not be in the mood for making a complicated dinner after already making a high-difficulty aquafaba-based recipe. This is more of a minor complaint since the book has plentiful and varied aquafaba-based recipes.

I still plan to do more experimentation with the cookbook. (I will update here when I do!) In particular, I really want to try the cheese recipes, the chile relleno quiche, and the Mississippi Mud Pie which looks absolutely incredible. But at this point, here are what I see as some pros and cons of the book:

Pros: An excellent beginner’s introduction to many possible uses of aquafaba. All of the basic recipes are covered. The book is being sold for a reasonable price and I really respect how well the author credits the various bloggers and food enthusiasts who made certain specific discoveries about aquafaba. Zsu goes into incredible detail about the properties of aquafaba, how to make it, and how to nail down the aquafaba basics, like meringue. She has clearly done her research and testing in depth to create this book.

Cons: I’d really like to see more of the baking recipes include weights – only a select few do. I’d be happier if the photographs were more professional and if they were included for more (or all!) of the recipes. The index could be improved – for example, buttercream should appear under ‘F’ for ‘frosting’ in addition to under ‘B’ for ‘buttercream’.

Here are some other recipes from Aquafaba shared for free on the web:

And here’s your chance to win a copy of the book. Enter using the Rafflecopter widget below. (Be patient – sometimes it is slow to load.) This giveaway is only open to US residents – sorry about that! Entries will be accepted until 11:59pm on Sunday, October 23rd. You can come back every day for additional entries.

Giveaway closed. The winner has been notified. Thank you for entering!

These vegan lemon blueberry muffins actually appear in the cookbook as lemon poppyseed muffins. But when your dining companion was already craving blueberry muffins, you don’t say no. (Especially if you are seeking assistance with the consumption of said muffins). 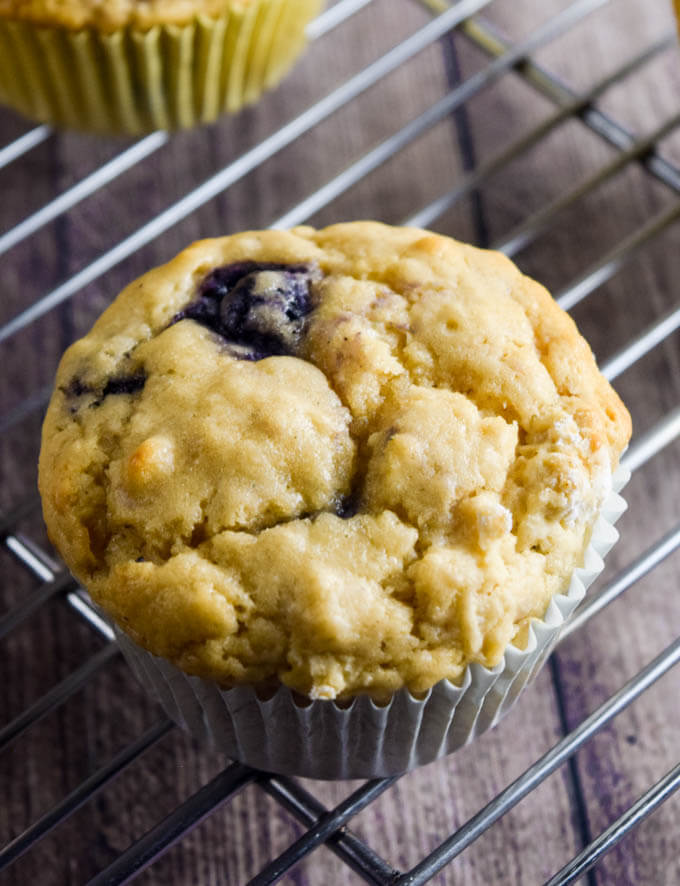 I love the way the aquafaba gives these a muffins a tight crumb, crispy exterior, and fluffy exterior. Below is the recipe as appears in Aquafaba; in the notes section you’ll find my instructions on how I modified it to add blueberry. 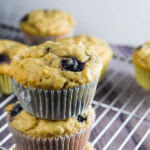 The lemon is subtle if you use only the zest, so if you love it with more of a lemon punch, add the optional extract. (from Aquafaba, copyright © 2016 by Zsu Dever. Used by permission.)
Course baked goods, Breakfast
Cuisine vegan
Keyword vegan lemon blueberry muffins
Prep Time 10 minutes
Cook Time 20 minutes
Total Time 30 minutes
Servings 12 muffins
Calories 233kcal
Author Yup, it's Vegan

Note from the author: Although aquafaba is best if homemade using the recipe provided in the book, you can use aquafaba from canned chickpeas. Use the organic, low-sodium, canned chickpeas and strain off the liquid into a measuring cup using a fine mesh strainer. Note the amount of liquid you acquired, then add it to a medium saucepan and bring to a boil. Reduce to a simmer and cook until the liquid reduces by 1/3. Cool the aquafaba completely before using. Notes from Shannon: To turn these into vegan lemon blueberry muffins, I excluded the optional lemon extract, and the poppyseeds. I reserved one tablespoon of the mixed dry ingredients, and just before baking the muffins, I tossed the reserved dry mix with about 1/2 cup frozen blueberries and folded them very gently into the batter. If you want to use fresh blueberries, you needn't do this step with the flour, which is meant to stop the blueberries from discoloring the muffins. I originally tried to make these with coconut sugar in an effort to make them a little healthier, but they didn't come out that way. The texture wasn't as fluffy and with the 1:1 substitution they weren't sweet enough. More modifications would be needed to make these refined sugar-free and/or whole grain. 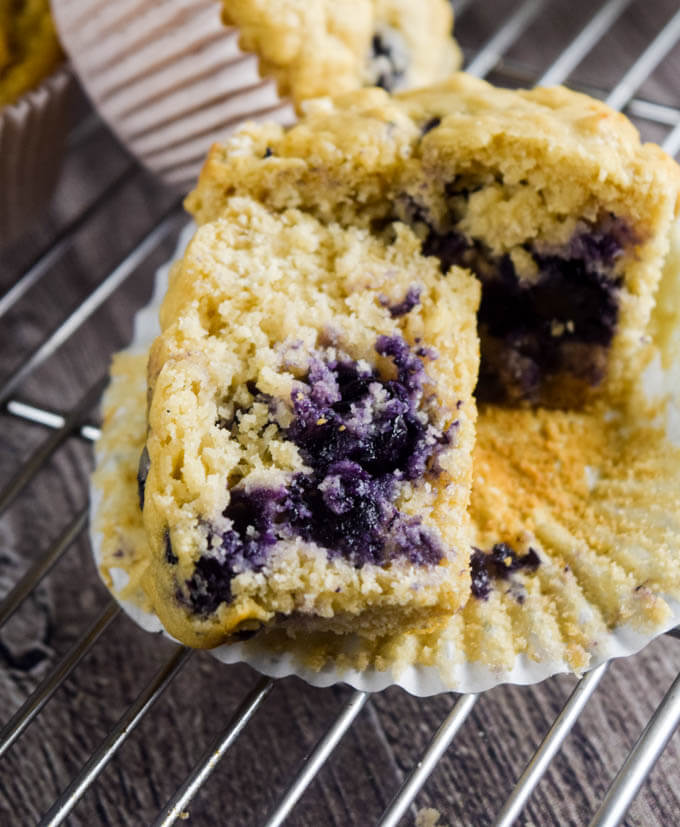 Disclosure: I received a complimentary copy of this cookbook in exchange for my review. Vegan Heritage Press is also kindly providing the giveaway prize. All opinions are my own; I’m proud of my record of honest and forthcoming product reviews! For more information see my advertisement policy.