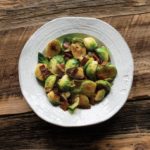 Brussels Sprouts with Shallots and Tofu Bacon (and a cookbook giveaway!)

Shallots and vegan bacon are caramelized with a bit of brown sugar to add just a touch of sweetness to the earthiness of the Brussels sprouts in this recipe. I prefer my Brussels on the crisp-crunchy side, but feel free to cook them longer if you like them more well done. (From Baconish © 2016 by Leinana Two Moons. Used with permission from Vegan Heritage Press.)

From Shannon: I highly recommend making these with my homemade tofu bacon, linked in the ingredients list!

(Shannon's note) I substituted coconut sugar for the brown sugar in the recipe. I also reduced the oil quantities to 1 teaspoon + 1 tablespoon. I used 3/4 of the recipe for tofu bacon found in the book for my choice of vegan bacon. The dish didn't need much salt because the tofu bacon was already salty and flavorful, but I added a pinch to the shallots when they were cooking, and another few pinches to the Brussels sprouts after I first stirred them.

(Shannon's note) To make a meal, I served these Brussels sprouts with a baked potato and some cauliflower, and cooked down the leftover marinade from the tofu bacon with some vegetable broth and nutritional yeast to make a quick gravy.

(Shannon's note) Nutrition facts exclude the vegan bacon since they will vary depending on which type of vegan bacon you use.

Brussels Sprouts with Shallots and Tofu Bacon (and a cookbook giveaway!) originally printed from https://yupitsvegan.com/brussels-sprouts-shallots-tofu-bacon/ May 8, 2016