It’s no secret that Pinterest is one of my blog’s biggest sources of traffic. But it wasn’t always that way! Over the past 18 months I have dramatically grown my Pinterest referrals using a few pieces of wisdom that I learned, along with a really awesome tool that I’m going to tell you about today. So if you’re wondering about the best way to grow Pinterest traffic, then keep reading!

Pinterest has some great things going for it. Everyone can share their content to Pinterest and anyone can find it once you do. You don’t have to hope that you meet Foodgawker’s sometimes-arbitrary acceptance criteria. And you don’t have to pray that StumbleUpon will show your page to stumblers. All you have to do is pin.

Your pins are then discoverable by Pinterest users. And they’ll show up in Google search results too, increasing your chances of someone finding your content when they’re looking for something. But just because something is discoverable does not mean that it actually gets seen.

I learned this the slow way. Every time I published a new post I would dutifully pin it to my Yup, it’s Vegan Pinterest board, and to one of my category boards (dinners, desserts, etc.) depending on the recipe. Then I would sit there and twiddle my thumbs, waiting for Pinterest users to stampede to my website.

They never came. Once in a while, I’d be checking my traffic sources and notice a spike from Pinterest. And that spike was pretty much always caused from someone else pinning my content from my site to their account. It was *not* caused by people clicking on my own pins that I created. I barely even browsed my own Pinterest feed, and had little idea what was actually going on over in that mystical place.

Eventually I realized that because those people were the ones who were creating pins that created clicks, I should probably start doing whatever they were doing! So one day I did a little research. I chose a couple of bloggers who also did vegan food and who seemed to have a lot of Pinterest followers and repins, and I clicked around on their profiles for a while to see what I could see. I noticed a few things right away:

The bread and butter of what really changed the game for me, though, happened AFTER I started doing items (1) and (3) above. I joined a bunch of relevant vegan and recipe group boards so that I can tap into a larger group of pinners. I started making Pinteresty vertical pins for all of my new posts, and retroactively for some of my old ones. (And I focused on taking more vertical photographs to begin with). The last piece of the puzzle was to pin a lot. But it’s not quite as simple as just… pinning a lot.

Pin at the right times for the most Pinterest traffic

Your Pinterest feed is a stream. All of the Pinterest boards that you follow are aggregated, and streamed to your feed, with the newest pins appearing at the top. Let’s suppose that I usually publish my new blog posts at 7 am, and most of my Pinterest followers are browsing Pinterest in the evenings. If I pin my new recipe at 7am, then by the time someone is on Pinterest that night, it’s been pushed to the bottom of their feed by all of the other pins, and unless they spend a really long time on Pinterest that day, they aren’t going to see my pin at all!

Once I realized this, I realized my Pinterest strategy was madness, and that I was suffering from a $#!@load of wasted potential. I had something on the order of 10,000 followers and I was doing next to nothing with that. I had to start pinning at spread-out times throughout the day if I wanted any chance at my followers seeing my pins.

Over the next period of time, I struggled with reminding myself to log on to Pinterest at various times. I was seeing a little bit of bump in my Pinterest referrals, but I was (1) stressed out about trying to do this and (2) kept forgetting and lapsing in my personal pinning schedule, forgetting to pin to some of the group boards, or simply not being able to pin at the times I wanted to. (I have TWO other jobs aside from my blog!)

This is where Tailwind comes in

I don’t remember how I finally came across Tailwind, but it has been the answer to my prayers, and once I started using it the impact was large. I started ramping up my Pinterest strategy in the summer of 2015, and I started using Tailwind in early 2016, so I think that the most appropriate comparison is to compare the last three months of 2015 to the last 3 months of 2016. Let’s have a look-see:

My number of Pinterest referrals increased by 97%, on average, over the time periods above, after my implementation of Tailwind. I think it’s fair to say that a little bit of that growth is organic and not caused by Tailwind exactly, so let’s round down to 90%. To this day, Pinterest represents about one third of my traffic, so a quick bit of napkin math suggests that using Tailwind (via increasing the number of page views that my blog receives from Pinterest) contributed to me earning somewhere in the ballpark of $3,600 in additional advertising revenue per 1-year period.*

*I arrived at this number by calculating my average monthly page views and monthly ad revenue against the 90% figure estimated above. Obviously I’m making a number of mathematical assumptions here, which also includes the conservative assumption that nobody who visits my blog from a Pinterest pin goes on to click on any other pages in the blog before leaving.

$3,600 sure isn’t a trivial amount of money, which means that Tailwind’s cost of $120 per year seems like a big freaking steal, now that I think about it! I am not being paid by Tailwind to tell you this. I genuinely think it is the best product out there for getting better at Pinterest and increasing your pinning.

Here’s how Tailwind works, in a nutshell: it’s a Pinterest scheduling service. You basically pin things the way you normally would, except that Tailwind holds onto them for later and pins them at a time that you’ve specified in advance. If that still sounds like a lot of work, let me explain why Tailwind’s features actually make it *really* easy to do this.

When I create a pin for a new recipe, I don’t have to individually schedule Tailwind pins for all of my bajillion group boards. Frankly I don’t have the patience for that! Instead, I use Tailwind’s nifty feature of grouping together boards into lists. I have just a few: ‘All’ – which means boards that each one of my recipes qualify for (for me that generally means vegan boards), ‘Gluten-free’, and a couple of others. Here’s the board list interface: 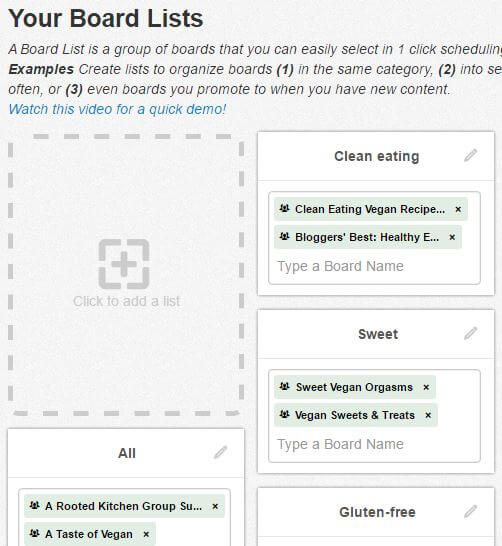 And here’s what it looks like when I go to schedule a pin:

(BTW, those lentil balls are totally delicious :)) Just one click on the ‘all’ button and pins will be scheduled of this image to all of the boards in that group. If you’re wondering how those pins will get published, read on…

By default, all of your pins that are scheduled get added to your main queue of pins that are ready to pin! Remember, each pin consists of an image + a board that the image will be pinned to. Now, Tailwind will automatically pin whatever is at the front of the queue to its designated board at each of the times listed in my preset schedule. You can add any specific times that you want, or let Tailwind suggest times for you. 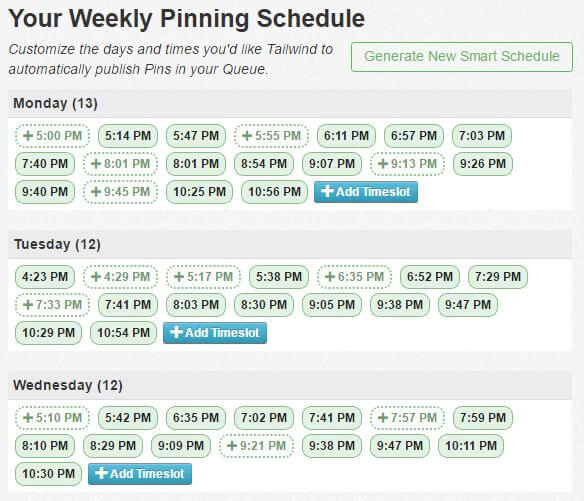 Since we just added a bunch of pins of the same image to different boards in a cluster, you’re probably wondering if this is going to make the pinning a little spammy. And that’s where one more nifty feature comes in…

I’m drawing your attention to the ‘Shuffle Queue’ option in the top right of this screenshot. When I click this button, it will randomize all of the pins currently in my queue, so that the same image doesn’t appear a bunch of times in a row anymore. You can also click and drag images manually into whatever time slots you want. 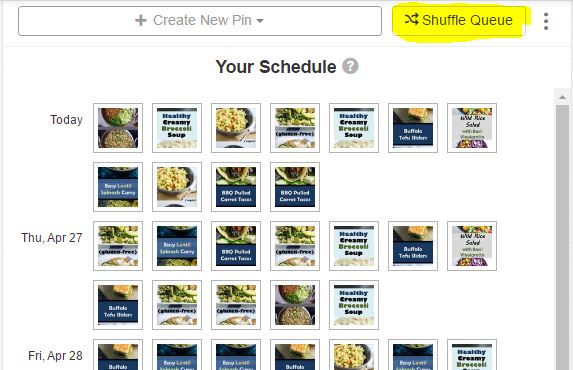 Tailwind has several more features that are also great, the combination of the three that I listed above is what I personally focus on the most. If you visit the Tailwind website, you can check out their demo, and sign up for a free trial period. As I hope I persuaded you above, buying the full version is WELL worth the money!

P.S. Note that the links I’ve included to Tailwind throughout this post are affiliate links. I will get a small commission if you visit via my link and end up deciding to sign up. You will pay the same price and receive the same service that you otherwise would, so it’s a win-win! I love to share my blogging tips and tricks with other bloggers, and so if you found this helpful then I would very much appreciate your support.