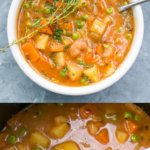 Thick and hearty vegetable stew that’s naturally gluten-free and vegan! Use your favorite vegetables in this flavorful, savory, comforting recipe! 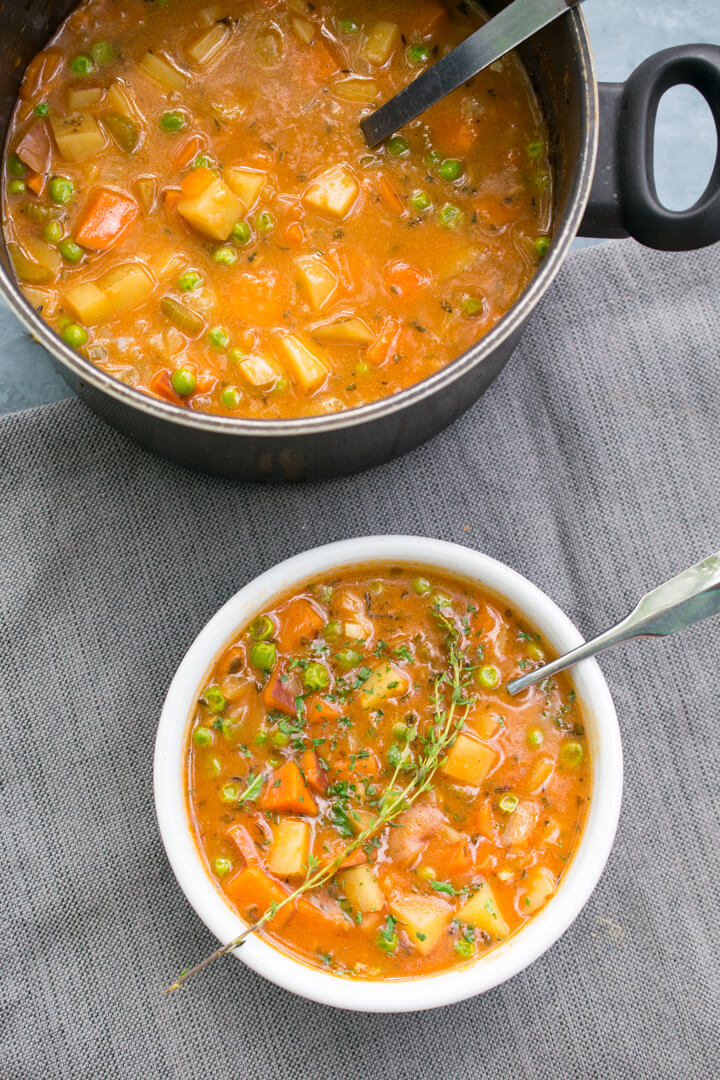 Even though it’s May now, I’m not quite ready to say goodbye to comfort food and have been playing around with this thick and hearty vegetable stew over the past couple of weeks.

To make a long story short, it all started when I did an experimental 48-hour fast, and needed a hearty meal to break the fast with that would be easy on my stomach but still nutritious. In addition to being packed with vitamins and fiber, root vegetables are an awesome post-fast choice, in case you ever find yourself in the same situation! Throw them into this veggie stew and you’ll be good to go! 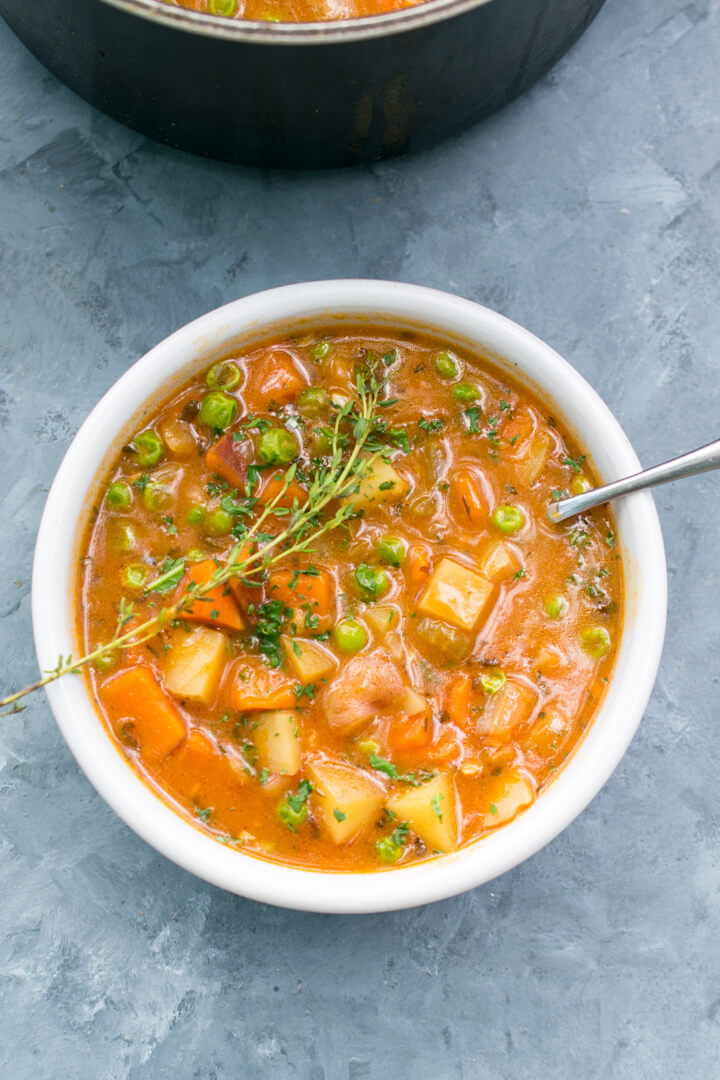 There is a certain kind of vegetable stew recipe that you can find on the internet: potato and carrot based; roux thickened; flavored with tomato and wine. Mine is the same general idea, but  this version has a little bit of a Shannon spin on it and I think you’ll enjoy it!

I used whole grain brown rice flour to thicken the soup and give it an added boost of nutrition, but you should be able to use almost any flour that you’d like.

I noticed that most vegetable stews call for about a cup of red wine. I love the notes that wine adds to this hearty vegan stew, but because the seasonings are simple, I feel that a smaller amount of white wine lets you enjoy the flavor of the vegetables more, and gives the dish a little bit of Mediterranean flair. 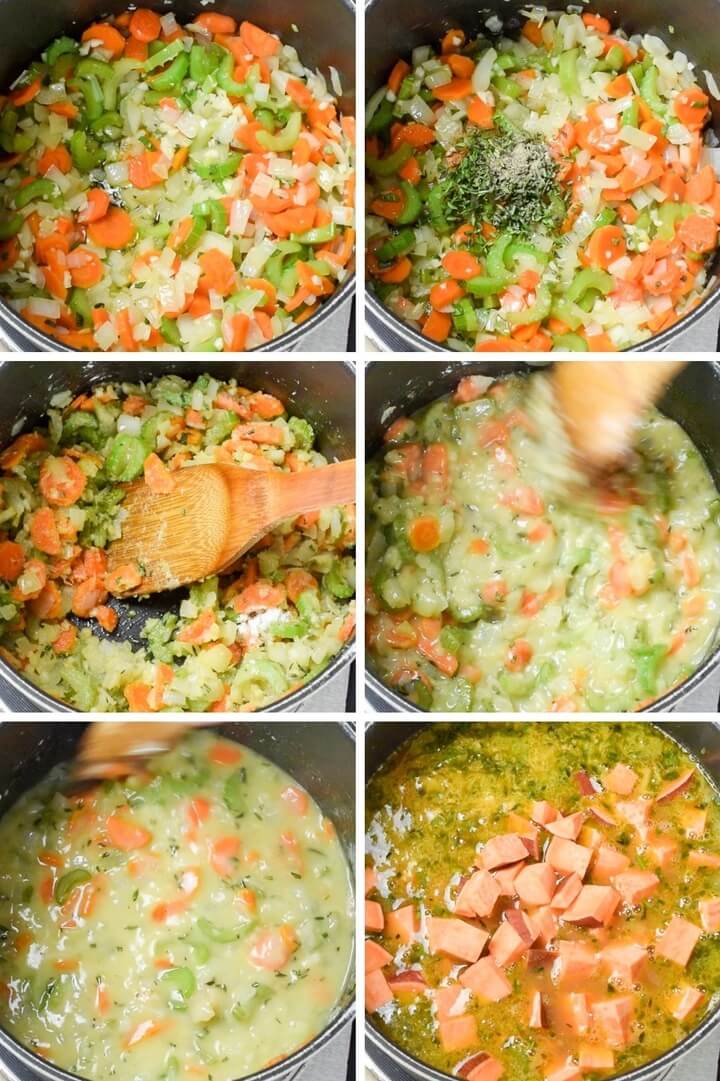 This stew contains a whole quartet of my favorite ingredients to boost umami. Tomato paste, soy sauce, nutritional yeast, and marmite – the latter two being increasingly optional. I wanted to capture that super savory flavor that meat-based stews tend to have, but provide it to you in a vegan “beef” stew.

(To that end, this dish is great with vegan beef-less pieces – such as Gardein tenders, or re-hydrated TVP chunks – added.)

You could also add another protein like chickpeas to this recipe if the green peas aren’t enough for you! As for other variations: make it spicy by adding red pepper flakes or hot paprika; swap in any hearty vegetables that you like; add about 2 cups of chopped kale 10 minutes before the soup is done. You can really go your own direction with this base. 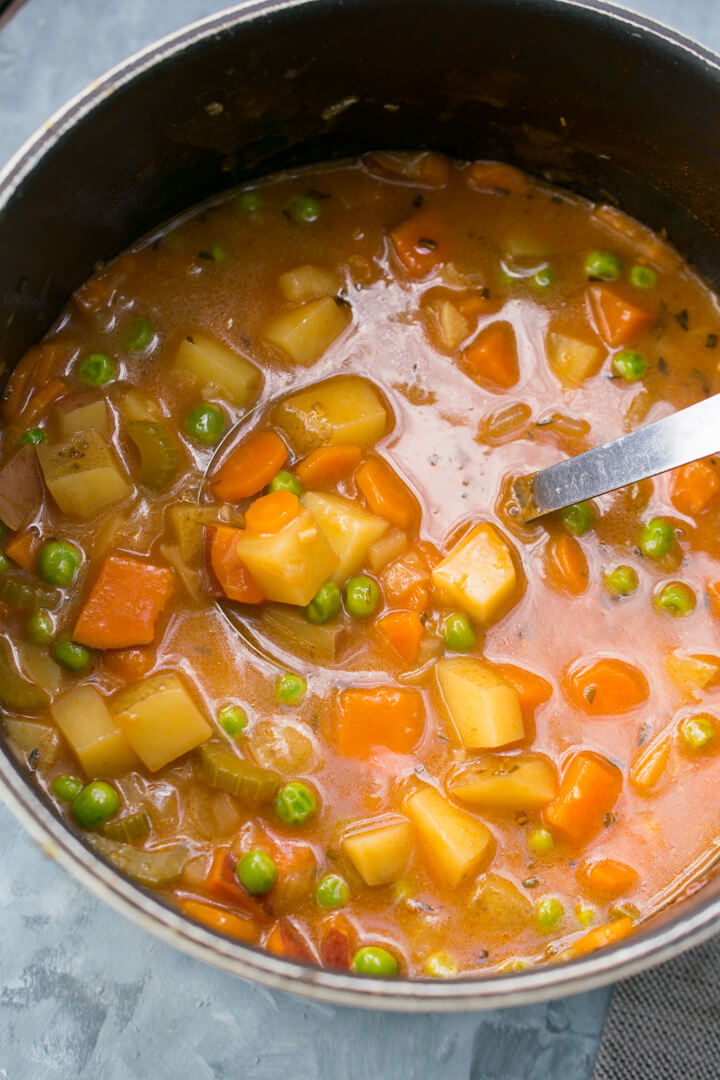 I think this vegetable stew would also be incredible with your favorite dumplings added and the roux amount reduced slightly. Next time I try this with dumplings, I will update with my recipe and results!

A classic vegetable stew with my own little spin on it! Hearty and rich, full of umami flavor, you'll love this stew in winter or any time of year!

For the saute mixture:

For the roux and deglazing mixture:

For the rest of the vegetable stew:

FRESH HERBS: I buy the "Poultry Blend" packet at my grocery store, which contains thyme, rosemary and sage, and use equal amounts of each. You can mix and match depending on what you prefer and is available; I use 1 tbsp of each herb. The total should be 3 tablespoons.

More stew recipes that are big on veggies: