I’m trying to grow this website as a source of side income and, I decided to bring my readers along for the ride! I thought that some of you might find it interesting – and hopefully also illuminating of why there are ads on the sidebar. This is a lot of work for less than minimum wage! Right now I’ve set a goal to see if I can hit earnings of $1,000 in one month. As you’re about to see, I’m not even halfway there yet. If I do ever manage to hit that goal, well, I’ll set another one! One thing at a time. Since this is my first time posting about this, I’m not totally sure what to expect, but I’ll share my income, expenses, and a few thoughts; and hopefully this can evolve over time. 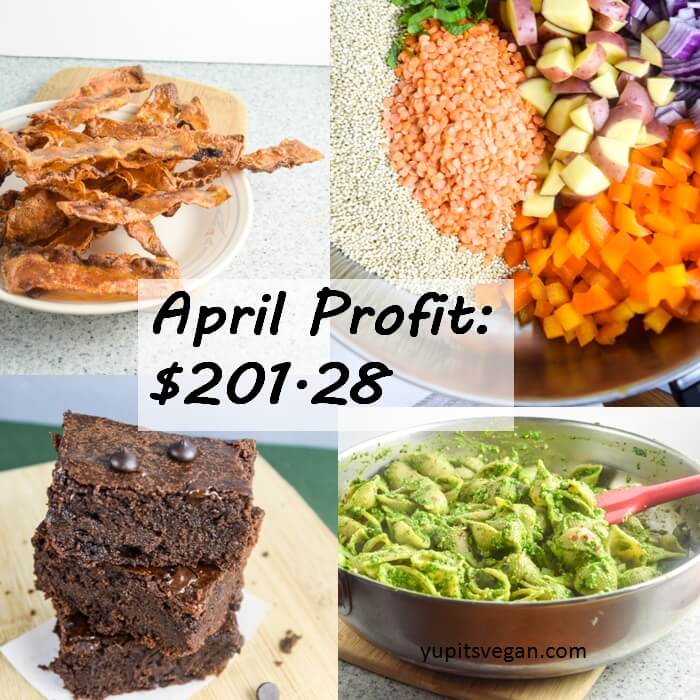 In April I published FOUR new recipes, which I’m pretty happy about. Finding the time to post regularly in addition to doing all of the behind-the-scenes stuff is difficult. I’m not making a very good wage on my blog at the moment (keep in mind that even after subtracting expenses from my revenue, I still have to pay income and self-employment taxes on top of that!), so it’s hard to prioritize that over other things in life… but on the other hand, the only way to keep growing my readership is to keep posting. Obviously brand new content is not the only reason people visit my site, but knowing that it will be consistently updated does prompt them to come back more frequently. As I discussed in my recipe failures of 2015 post, a lot of work goes into every recipe that appears here, and I have high standards for what I choose to publish. So there are some months where I spend a ton of time on recipe development but not much content makes it across the finish line! Here were the recipes that made the cut in April:

One Pot Moroccan Quinoa with Red Lentils
It’s only been a few days since this post went live but it seems to be well-received so far.

Rice Paper Bacon
This recipe was pretty instantly popular and a ton of readers have been sharing it, trying it, and leaving feedback. I’m really excited – and I’m very happy with how the photos came out.

Easy Spinach Pesto Pasta
I’d say that this recipe has been a middle-of-the-road performer. I wish I could have done a better job with the pictures to make it really pop. It’s one of the most delicious things I’ve eaten in a while and I’m not sure if the images do it justice.

Fudgy Walnut Brownies
This recipe was, unfortunately, an underperformer. I wasn’t too happy with the pictures and neither was Foodgawker, handing me my first rejection from them in at least a year. I don’t really blame them. The photos could have been a lot more crisp and they ended up with some (to me) awkward angles, too. Now, Foodgawker is not even close to the be-all and end-all to my traffic. It’s not even in my top 10 referral sources; but presence on Foodgawker does help my recipes get noticed by others who might share them. And probably for the same reasons Foodgawker rejected them, the brownies are not getting a whopping amount of social shares either. The good news is: after looking disappointedly at the pictures, I decided I had finally had enough of that, and I bought a tripod. (Next time I save up a couple hundred dollars, I’m looking into macro lenses, too). That isn’t counted in April expenses, though, because the recipe development, and tripod purchase, happened in March :).

Well, that’s it for my April summary! I’ll be back in early June with a look back at how things went in May. Cheers!