Last month, I mentioned that my current goal is to reach $1,000 of revenue per month. Well, thanks to a fortunate series of events, I’ve already gotten significantly closer to that goal and expect that I have a good chance of meeting it in June. The biggest factor in making the leap this month was that I continued to spend time researching my monetization options, and I found one that was a really good fit. But we’ll get to that in a sec! 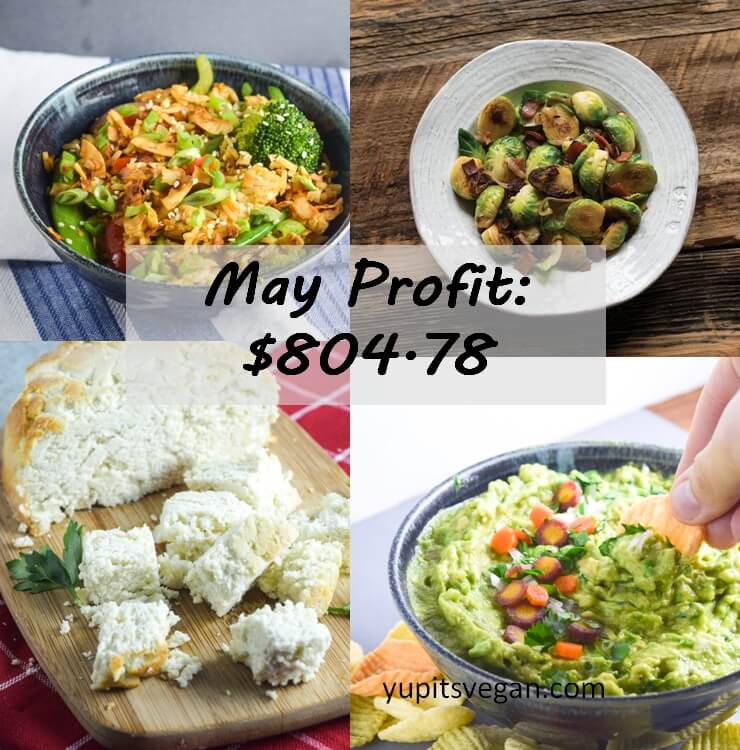 A look back at May

In May I published three new recipes, one of which was excerpted from the Baconish cookbook rather than developed by me. I had a fourth recipe planned, developed, photographed, and generally ready-to-go, but managed to take two weeks to finish writing it and hit ‘publish’, so that didn’t end up going live until June. By the way, there was no particular reason for that, except that I had a busy schedule and decided to use my free time relaxing instead of blogging.

I find that an interesting concept to think about. The best way to grow traffic is to continue creating new content. If, conceivably, I already had enough passive income from this blog to support myself, then I could more or less act whimsically with regard to my blogging schedule and recipe development. But where I’m at right now, this is only a side income stream. Every week I take a break from blogging is potentially (mathematically speaking) losing out on compounding future passive income; this is as motivational as anything to keep showing up every day, but there’s such a thing as burnout and the rest of life continues on, away from the internet. It’s impossibly difficult to know where to draw the line. I wonder to myself if I am cheating myself out of my own goals by not being more dedicated and disciplined, but then I also try to see myself through a compassionate lens and not set my expectations unreasonably high. I think I would probably have a different perspective on this if blogging full-time, and I don’t see that on the horizon soon, based on where things stand with my (day job) career.

I definitely don’t seem to post nearly as frequent new recipes as other bloggers with similar sized followings and aspirations; and I certainly worry that my website is bolstered disproportionately by a few of my recipes that have gone somewhat viral. (But again, your recipes can’t go viral if you’re not creating them in the first place…) So I guess you could say I’m in the thick of a minor existential blogging crisis. And the only thing to do in such a crisis: keep putting one foot in front of the other, no matter how slowly.

Here were the recipes that went live in May:

Thai green curry guacamole
Average performance. I’m happy with the recipe and the photos, and there’s been a decent amount of interest. Finding Vegan shared the post in early June, so now as of press time the performance of this recipe is creeping up. I did fumble the timing of the post. Obviously as a guacamole recipe published in early May, it was designed with Cinco de Mayo in mind, but I didn’t get it out the door until May 4th, leaving only 24 hours for it to generate interest before the holiday came and went. I should be more mindful about timing holiday-related recipes to maximize the bonus attention that they have the potential to receive.

Brussels sprouts with shallots and tofu bacon
This was the recipe from Baconish that I shared along with a review and giveaway. I was not happy with my photographs but I ran out of time to retake them – I signed up in advance for a specific date on the virtual book tour. One thing that was just a little unfortunate was that out of the selection of recipes from the book allowed to be published, none of them were really spring-seasonal – I think a Brussels sprouts post would have performed better in the autumn. However, this is a compromise that obviously I chose to make when agreeing to review the book – which, by the way, is a really excellent cookbook that I liked a lot and am happy to promote.

Baked almond feta
I liked my almond feta pictures when I originally took them and edited them. Then a few weeks later when I was finally getting the post ready to go, I started to feel a little underwhelmed by the pictures again. But at that point it had been a while since I posted new content so I went ahead and published it anyway. I’ll be making the recipe again and replacing the photographs when I get the chance. Thankfully, the almond feta was planned to be promoted as an ingredient within my new Mediterranean chickpea salad. Having your recipes reference each other is a great tool for internal backlinking and increasing pageviews, but also needs to be used judiciously, or readers will be inconvenienced by the extra navigating and organizing that they need to do. For example, a commenter (if you’re curious, go to the recipe page and do ctrl+f+fu**…) on my teriyaki cauliflower rice bowls had some pretty strong feelings about the fact that the recipe linked to one sub-recipe of mine and one recipe on an external site in order to construct the bowls. I’m not very accepting of the rude way the concern was brought to my attention, but I heard it all the same, so I’m trying to limit recipes to containing only (1) other recipe within them now. This digression is all to say that I’m not taking too much stock in the performance of the almond feta recipe yet because I expect it to pick up speed now that the salad that uses it is also published.