Season’s greetings =]. This pizza pull-apart bread is made completely from scratch, from the dough to the cashew cheese. And nothing beats homemade! 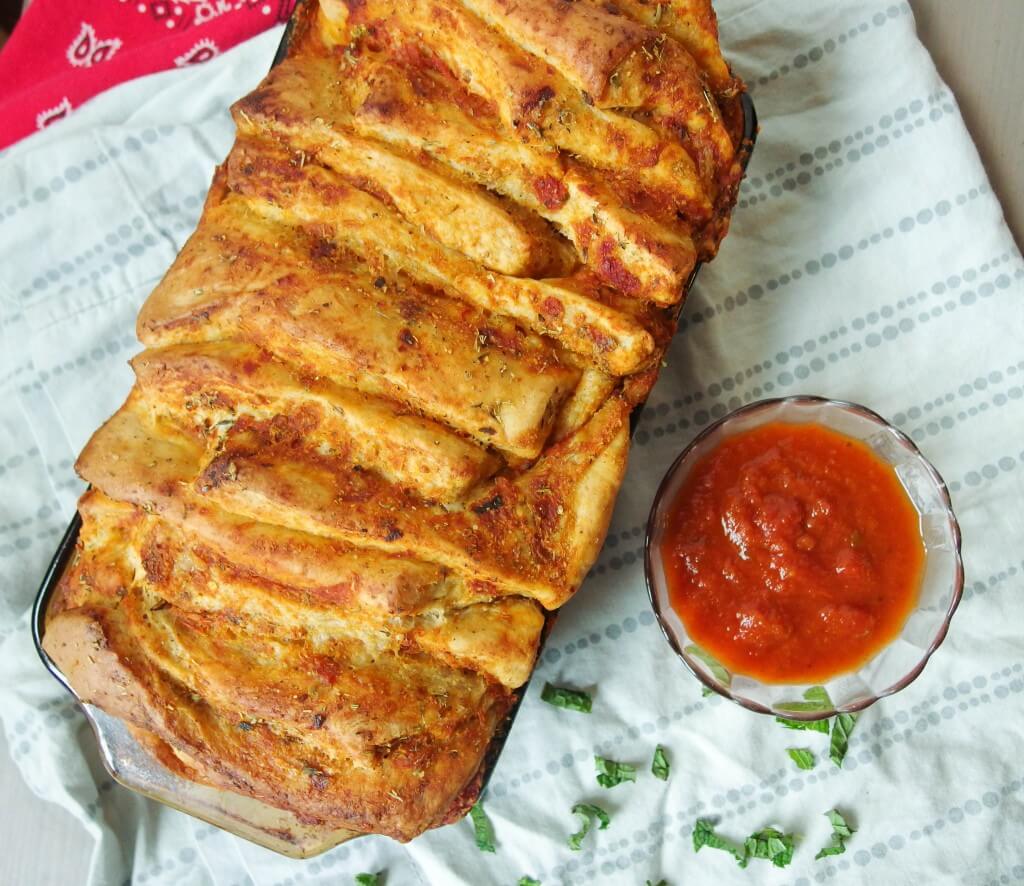 What I say next, I do so with trepidation: this really does taste to me like it was made with dairy cheese. Please heed these words as I do NOT say them lightly. I’m a believer that vegan food isn’t an imitation game, but I think in dishes like this where cheese is an accent instead of the primary flavor/sauce element, vegan cheeses do their job best and can really shine. Plus, I’m almost always feeding a mixed crowd – and I have more success with something like this (other examples are my lasagna and pizza bagels) where the cheese element is subtle. So with the caveat that the subtlety makes it more convincing, I did find that this authentically satisfied my cheese craving.

Seriously, it was a hit. The next time I need to impress someone (vegan or not) for any reason I’m gonna make it again. Especially because the entire thing may or may not already be gone.

Anyway, I have to acknowledge that it was kind of a b**** to make, not even because of dealing with the yeast and making the cashew cheese, but because of the part where you cut up little dough squares and stack them together in the loaf pan. Whenever you see a {non-vegan} pizza pull-apart bread recipe, or even the dessert versions for that matter, it just looks like this perfect little stack of squares, with the sauce or cinnamon sugar adhering perfectly to the surface. 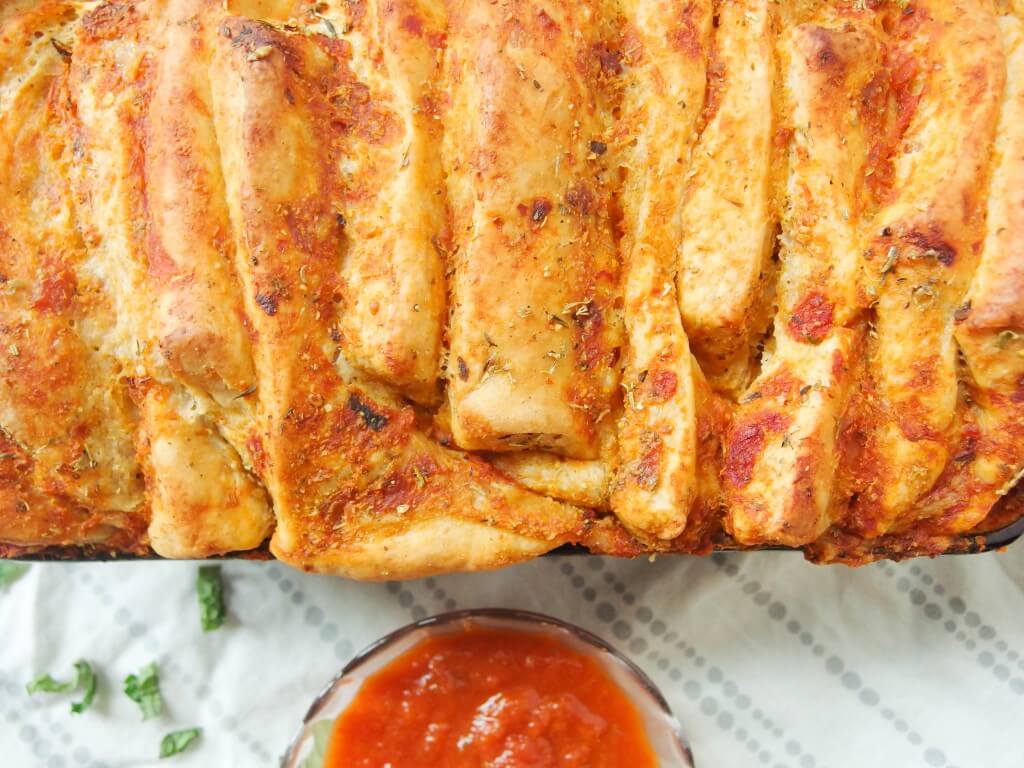 Um, no. Not only was my entire counter covered in sauce and cashew cheese, and my hands a tomatoey red, but some of the squares got folded in on themselves, and because of all of the sauce the stack of dough squares was so slippery that I could barely make it work inside the loaf pan. It looked like a bunch of dough blobs floating in a congealed tomato sea, but I did manage to pull all of the dough upright. Phew. I wasn’t sure what was going to happen when I baked it, but as you can see, it turned out quite well.

Hey, maybe this would be a fun one to make with the kids, since they’re going to make a gigantic mess no matter what you cook together? Accurate? I’m actually terrified of children. My cousin (age 6) is the only one I am comfortable around because he is just too hilarious for words, but he also probably isn’t patient enough to make this with me. I’m sort still waiting for my own maternal instinct to kick in. The plan is to make some adorable vegan babies someday, but not anytime soon. I’ve got my hands full enough trying to get my cat to lose 2 pounds and remembering to lint roll my pants before going to work every day. Yep, adulthood is hard.

Aaaanyway… that’s enough rambling. You just want to know how to make pizza bread, which I don’t blame you for. This is actually whole grain but has a bit more oil than I typically like to use. Still, the fat content is approximately 75% lower than the original!

Makes one loaf that is extremely difficult to stop eating. Adapted from this recipe which, I reiterate, is not vegan – but does have some nice step-by-step pictures that might be helpful.

Filling:
Cashew mozzarella – This recipe from Vedged Out. It’s by far my favorite vegan cheese. I used mellow miso instead of salt, cider vinegar instead of lemon juice (just this once because I”m out of lemons), omitted the optional oil, and reduced the tapioca starch to 2 tb (to make it easier to spread around on the dough). Note that you’ll need to plan to soak your cashews in advance if you don’t have a Vitamix or the like. I used about half of the recipe for this bread and saved the other half.
Your favorite tomato sauce – I used about 1/3 cup.
Minced garlic – because, more garlic. I used 1 large clove.
Other toppings – as desired. Next time I’m thinking I’ll try bell pepper and black olives. Yum.

Proof the yeast. Stir together all 3 proof ingredients and set aside for about 10 minutes, or until frothy.

Make the dough. Sift together the flours and salt in a mixing bowl (I just mix them with a fork). Make a well in the center and add the yeast mixture, coconut oil, applesauce, tofu, and additional milk. Continue stirring with the fork until the mixture comes together smoothly, then mix with your hands. Add any more flour as kneaded to bring the mixture into a ball, and transfer onto a lightly floured surface. Knead adding as little flour as possible, for 8-10 minutes or until smooth. You want this dough to be very tacky (which means that it will feel very moist, and will stick to your hands but come off easily). Shape into a bowl, place in a bowl covered with a damp towel, and let rest in a warm place for about an hour, or until approximately doubled in size.

Get your filling ready. This is a good time to make the cashew mozzarella which comes together pretty quickly and is best fresh.

Assemble the pizza pull-apart bread-ness. Poke the dough gently a couple of times to deflate it, then roll it out onto a floured surface (probably the same one). You want it to be between 1/8-1/4in thick. Using your hands or a rolling pin, do your best to get it into a rectangle shape. Use a spoon to spread around the tomato sauce, covered the entire surface of the dough. Then dollop the cashew cheese all over it.

Using the sharpest knife you’ve got, cut into squares – I made 12 approximately equal sized squares, but if you have slightly more or fewer than that, it should be okay. Do your best to stack the pieces on top of one another and then put them all together, sideways, in a lightly greased loaf pan. Cover the loaf pan with a damp towel and let rise for at least another hour (or up to overnight in the fridge – I let mine rest in the refrigerator for a few hours while I worked out and bought some xmas gifts). It will have gotten at least 50% larger again.

Cook. Put the loaf pan inside a bigger roasting pan or on a baking sheet (to catch drips). Bake at 350 degrees Fahrenheit for 15 minutes. If using the topping, whisk together the ingredients until emulsified. Remove the loaf from the oven and quickly brush on the topping, all over the top of the loaf, then put back in the oven. Bake for about 20 more minutes or until firm throughout and browned on the top.

If the bread gets too brown before the inside is done, cover the top with foil.

Let cool for 10 minutes before eating. You’re gonna want to eat this right away. It might be okay for a couple of days in the fridge, if reheated in the oven (not microwaved), but right out of the oven is of course the best. Serve with additional tomato sauce, if desired. 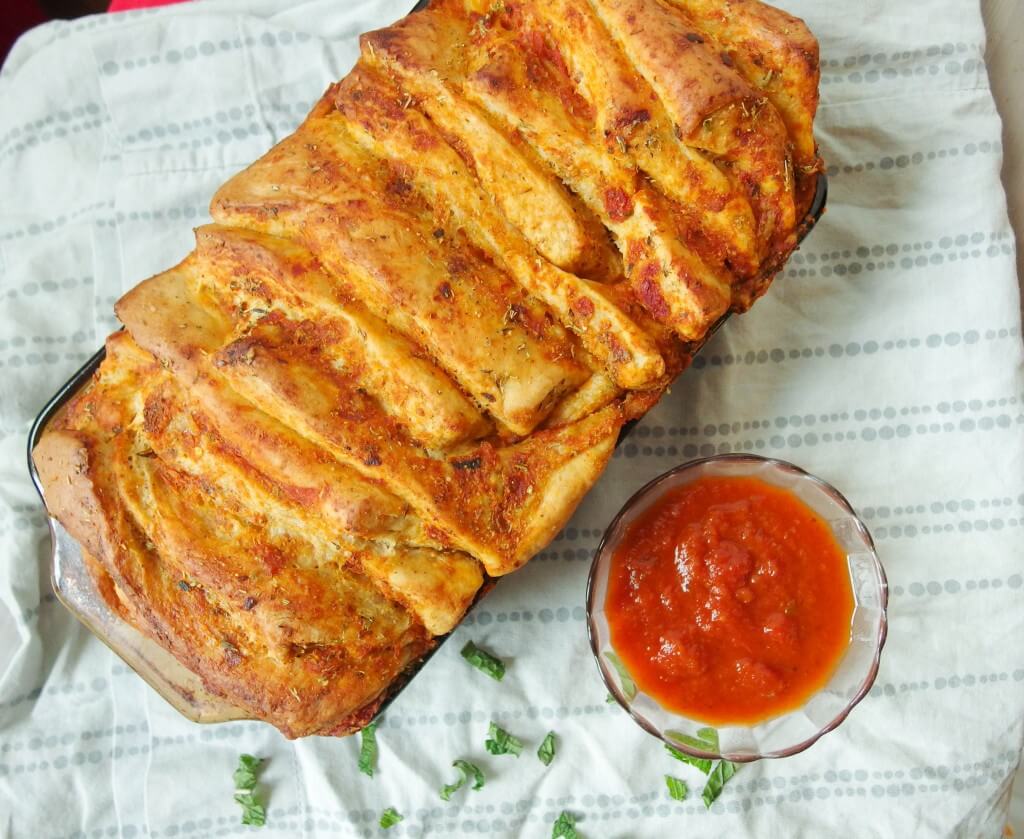 Phew! Maybe I’m kind of a freak for spending my weekend making this (twice! the first time I killed the yeast and the proportions in the dough weren’t quite right), but I don’t regret it one bit. Look at that beaut!

I’m headed on an evening flight today to my hometown of Seattle, WA to spend {our secular interpretation of} Christmas with my parents, brother, and extended family. I’m really really excited as I haven’t been home in quite a long time. Wishing a very very happy holiday to you all. Thanks for being a reader of Yup, it’s Vegan – I’m so very blessed that when I have successes in the kitchen, I have a place to share them. All the best =]