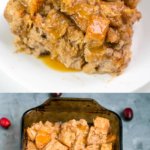 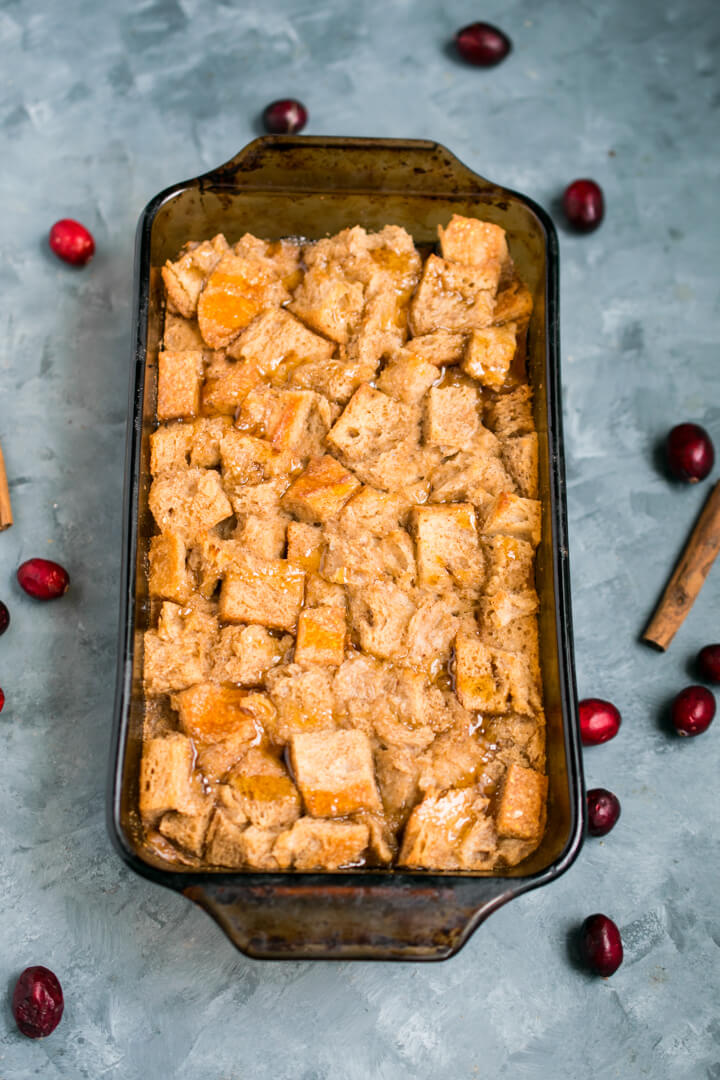 This vegan bread pudding recipe is almost as old as time itself, originally published on this site in 2013, AKA before I owned a real camera. However, I will always remember bread pudding as one of my first great vegan baking successes and the recipe more than deserved a modern update! Even though I take much less horrifying pictures now, bread pudding is still not beautiful, so I’ll keep this short. 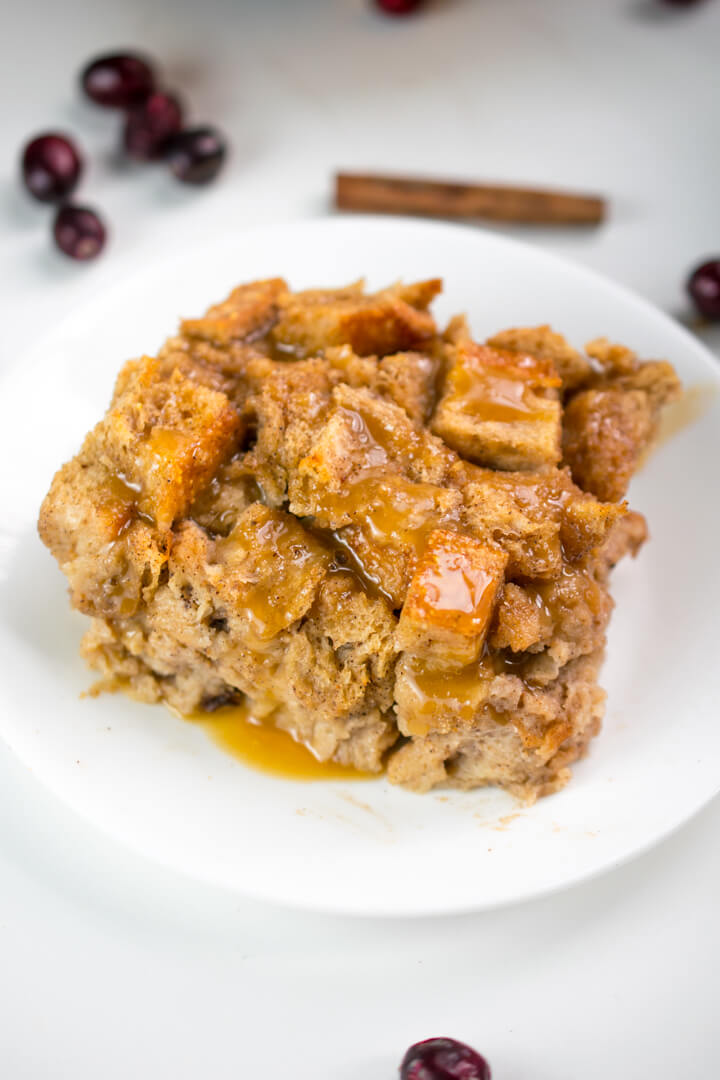 The method for this vegan bread pudding is super simple and it’s a little bit similar to how my vegan stuffing recipe is made. You’ll dry out day-old bread cubes in the oven, and meanwhile you’ll whisk up a liquid mixture that will form the eggless custard base. Then you’ll soak the bread cubes in the custard before baking to ensure even cooking. 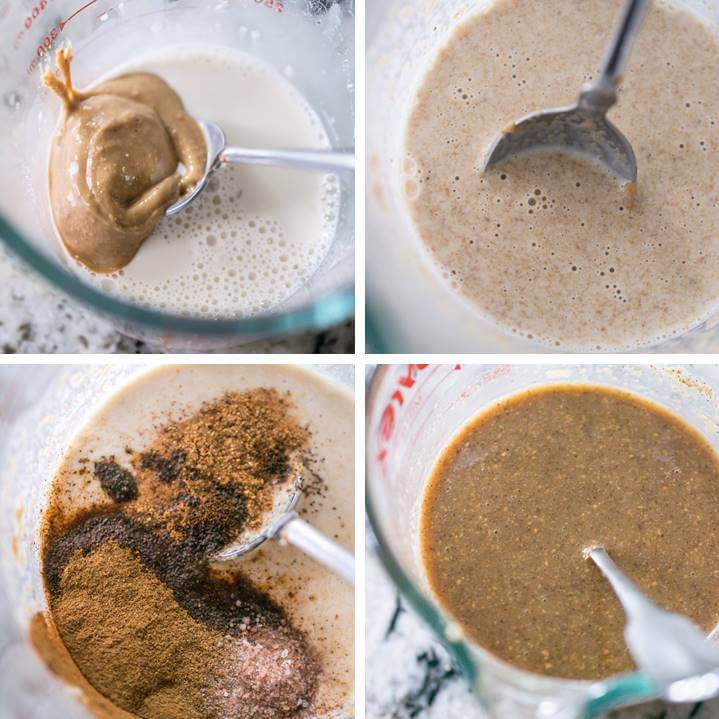 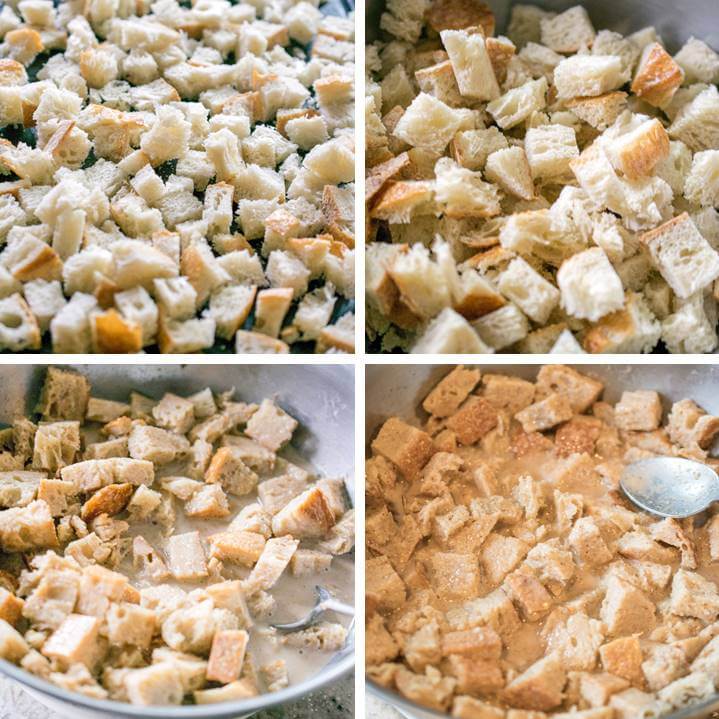 In my eyes, the most important step in making this recipe successfully is to toast the heck out of the bread. Let the bread cubes keep going in the oven until all of them are nice and dry. This will ensure an even texture in your finished vegan bread pudding, and a nice moist texture that isn’t too gooey.

It will seem like you’re pouring a lot of liquid into the bread but as long as you were patient in the toasting step, it will be the perfect amount. You can see in my photos how well the pudding sets once baked! Rustic, moist, holds together, and isn’t liquidy. 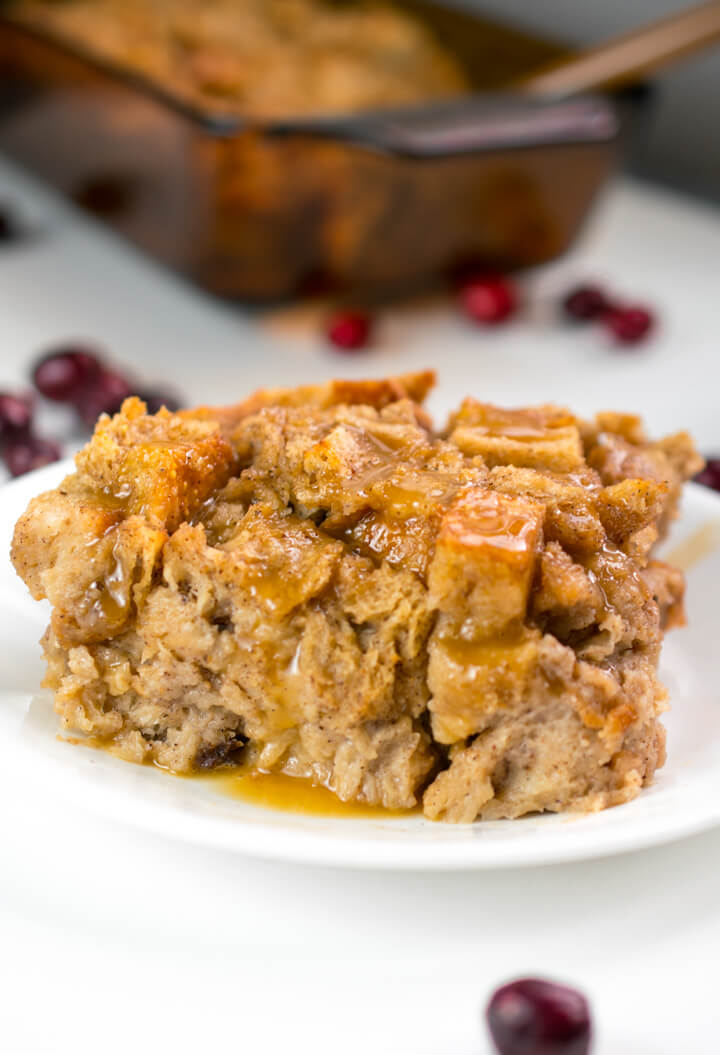 Any bread that you like and that isn’t too savory will probably work great here. I’m always partial to a good, crusty, country sourdough. I haven’t tested this with gluten-free breads, which have a tendency to fall apart in these types of applications. It could still work if you use one that’s fortified with xanthan gum for holding power, but I’m not sure.

Also, for an extra luxurious flavor and richness, instead of the whatever-non-dairy-milk the recipe calls for, you can use canned coconut milk. So decadent!

In the notes section of the recipe, I give a few more suggestions for variations and substitutions. I hope you enjoy this vegan bread pudding and please let me know in the comments if you give it a whirl! 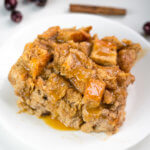 BREAD: Sourdough or another bread that's a little bit fancy and crusty will provide the best flavor. I've certainly made this with whole grain bread before, and while visually it's rather drab, it still tastes quite nice. CASHEWS: The original version of this recipe called for raw cashews to be blended. I wanted to make it a bit more accessible so I've swapped that out for nut butter. However, if you want to make the original, it was 1/4 cup of soaked raw cashews. MIX-INS: Raisins are a classic addition to bread pudding; chocolate chips are a less common but delicious one! (Pairing especially well with the peanut butter version of this recipe). SERVING SUGGESTIONS: I made a quick glaze by powdering brown sugar and mixing it with a splash of rum and soy milk, but I think this vegan bread pudding is even better with some dairy-free ice cream. PAN: If you don't have a loaf pan, you can make this in an 8x8-inch pan, and reduce the baking time. BLACK SALT: For an interesting "eggy" flavor add a pinch of black salt (kala namak) to the pudding mixture.