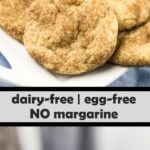 After much experimentation, I finally bring to you my recipe for vegan snickerdoodles. These vegan snickerdoodles are soft, chewy, and a tiny bit tangy, just like their non-vegan counterparts. All without butter or margarine, commercial egg replacer, or other processed vegan alternatives. Crispy on the edges, rich and chewy in the center – what more can you ask from this classic cinnamon sugar-dusted cookie? 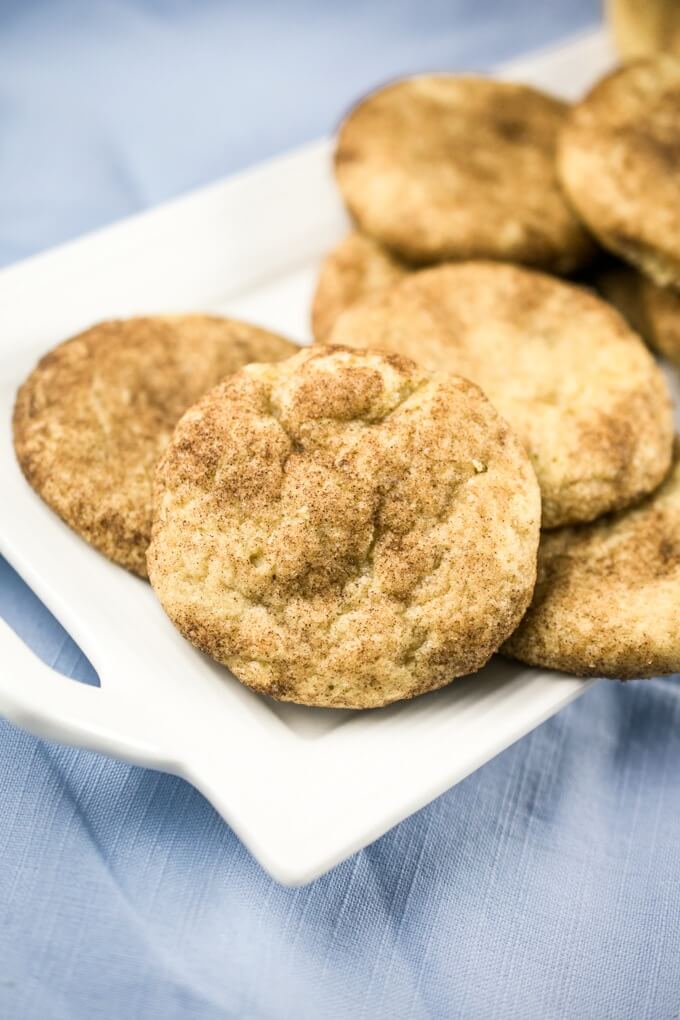 Instead, a base of coconut oil with just a touch of vegetable oil gives these vegan snickerdoodles their buttery texture. Because ‘chewy’ is one of the most important traits I seek in a cookie, I also used some brown sugar (which is not a traditional snickerdoodle ingredient, but aids chewiness in this vegan version). These cookies have delighted dozens of non-vegans, so you can bring them to your mixed holiday gathering or bake sale with confidence!

New and improved in 2017! This post was originally published in 2015, but I’ve made 10 batches of these dairy-free snickerdoodles this fall in an effort to make the recipe even more foolproof and delicious. Your eggless snickerdoodles will now come out perfect every time thanks to weight measurements for the ingredients. Bonus, this updated recipe actually has LESS oil and LESS sugar than the original. It’s a win-win-win! 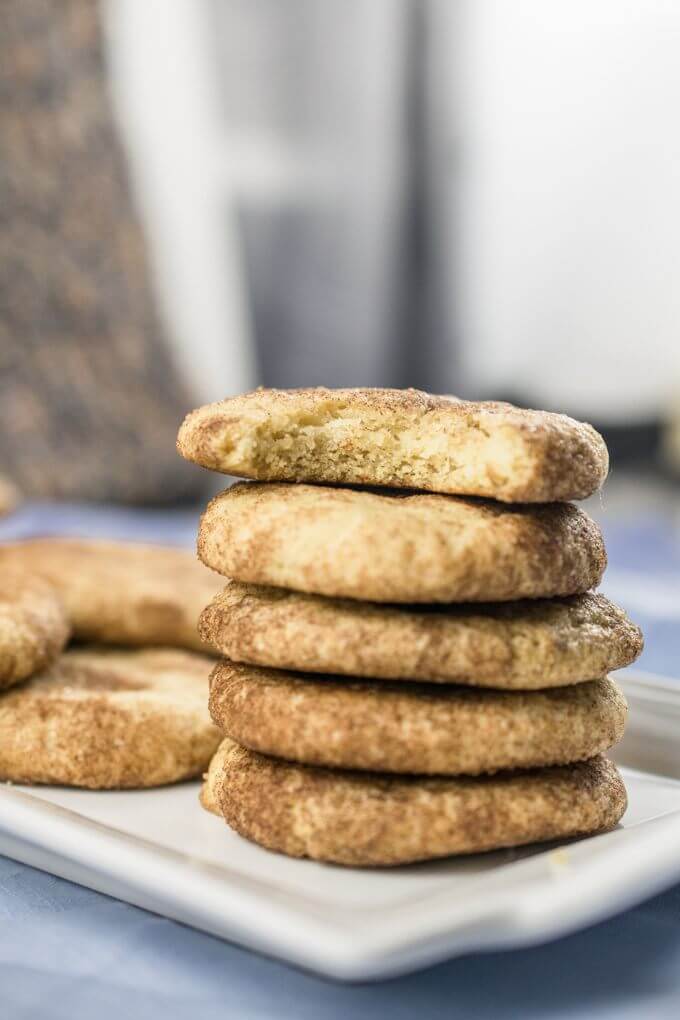 Of course, the biggest struggle with veganizing cookie recipes is the egg. I don’t usually care for the cakey texture introduced by applesauce, and while I love the use of flax “egg” in my vegan oatmeal raisin cookies, the nutty flavor of flax can be overpowering in more delicate cookies like snickerdoodles. 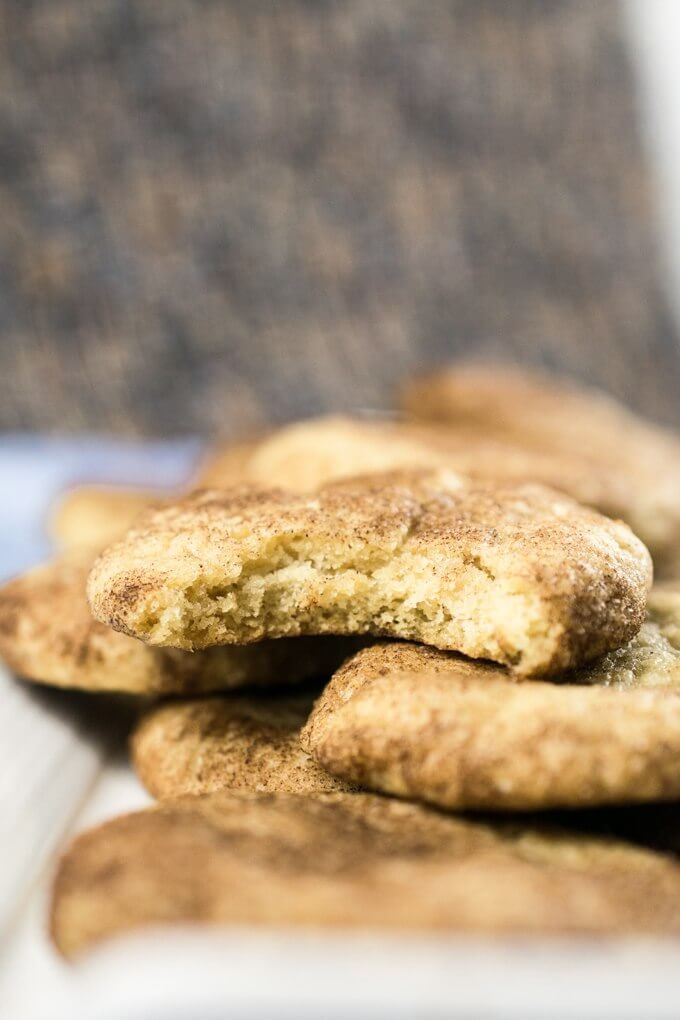 Luckily, as you may know, aquafaba (bean cooking liquid) has transformed vegan cooking and baking, with its protein and starch content making an excellent stand-in for eggs in some applications. Using it is as easy as opening a can (I recommend BPA-free) of chickpeas and straining out the liquid. You absolutely cannot taste any trace of bean flavor in the final product. Btw, NO whipping is needed here like it is for meringue. The aquafaba gets creamed together with the oils and sugar, so you don’t need to learn any fancy techniques, just mix it in! 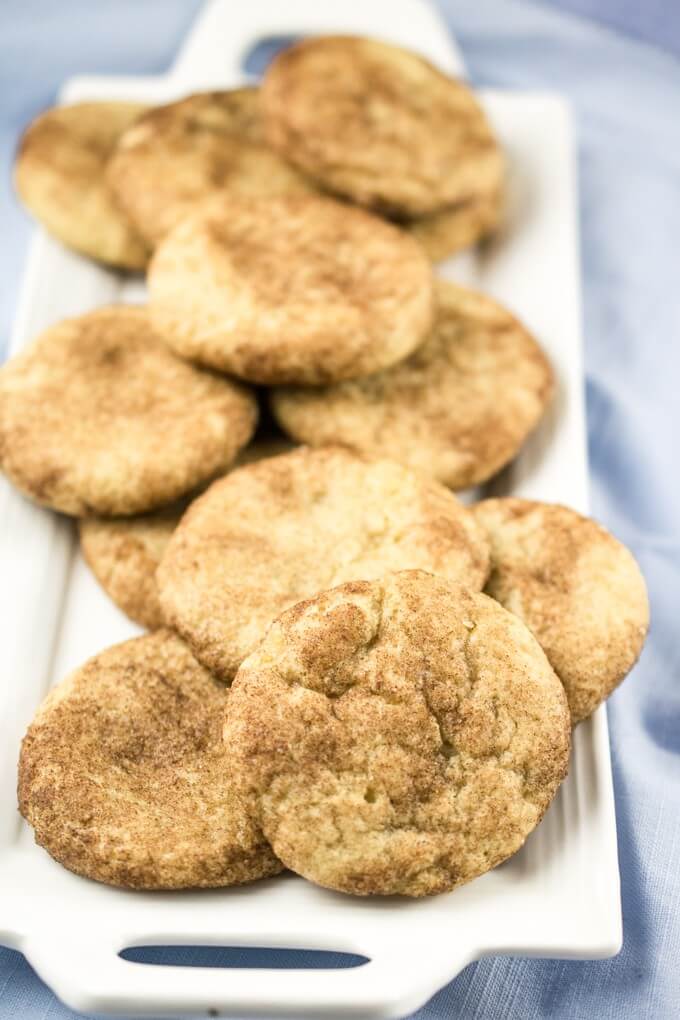 The aquafaba in this vegan snickerdoodle recipe makes the cookies chewy while also keeping them tender and moist. I had been living a life deprived of good vegan snickerdoodles, but no longer! Are these egg-free snickerdoodles healthy? Nope! But they’re perfectly delicious! If you give them a try, let me know in the comments or share your results with me on Instagram by tagging @yupitsvegan and #yupitsvegan! 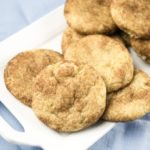 WHAT IS AQUAFABA?: Aquafaba is the cooking liquid from beans. For this recipe, white bean or chickpea aquafaba is recommended because of the color. I used liquid measured from a BPA-free can of white beans. ROOM TEMPERATURE: I'm not joking around when I tell you to have your non-dairy milk and aquafaba at room temperature. If they're still cold, warm them gently for a few seconds in the microwave. Cold soy milk will cause the coconut oil to solidify into pieces and make it impossible to cream it properly with the coconut oil. And then your cookies will come out weird. Sad! MEASUREMENTS IN GRAMS?: You'll have much more consistent results with these vegan snickerdoodles and my other baking recipes if you measure by weight. Weight measurements are more precise than volumetric measurements for many types of ingredients. Get yourself a $10 kitchen scale and become a more awesome chef! COCONUT OIL: You can use virgin coconut oil, but note your snickerdoodles will have a coconut flavor. Don't substitute vegetable oil for the coconut oil or vice versa. You won't be happy with the outcome. RECIPE UPDATES: Improved in 2017 with adjusted oil and sugar quantities to guard against the cookies spreading, and improve the crinkly tops. I've also swapped cane sugar for turbinado sugar, as the cane sugar emulsifies better with the oils. Enjoy! GLUTEN-FREE: I recently tried to make these gluten-free by substituting all-purpose gluten-free flour by weight for the all-purpose flour. It was a hot mess. The cookies spread everywhere and had a crumbly texture. I'm going back to the drawing board on a gluten-free version!