We’re still a couple of weeks out from the 4th of July, but I thought I’d share this mixed berry yogurt tart recipe in advance for anyone who feels inspired to tackle a red, white, and blue vegan dessert as part of their celebration. As far as desserts go this is on the light and refreshing side, which is becoming increasingly important as the temperatures here rise. Though will I admit I couldn’t resist turning on the oven one last time for another awesome strawberry recipe (coming soon!). But anyway. 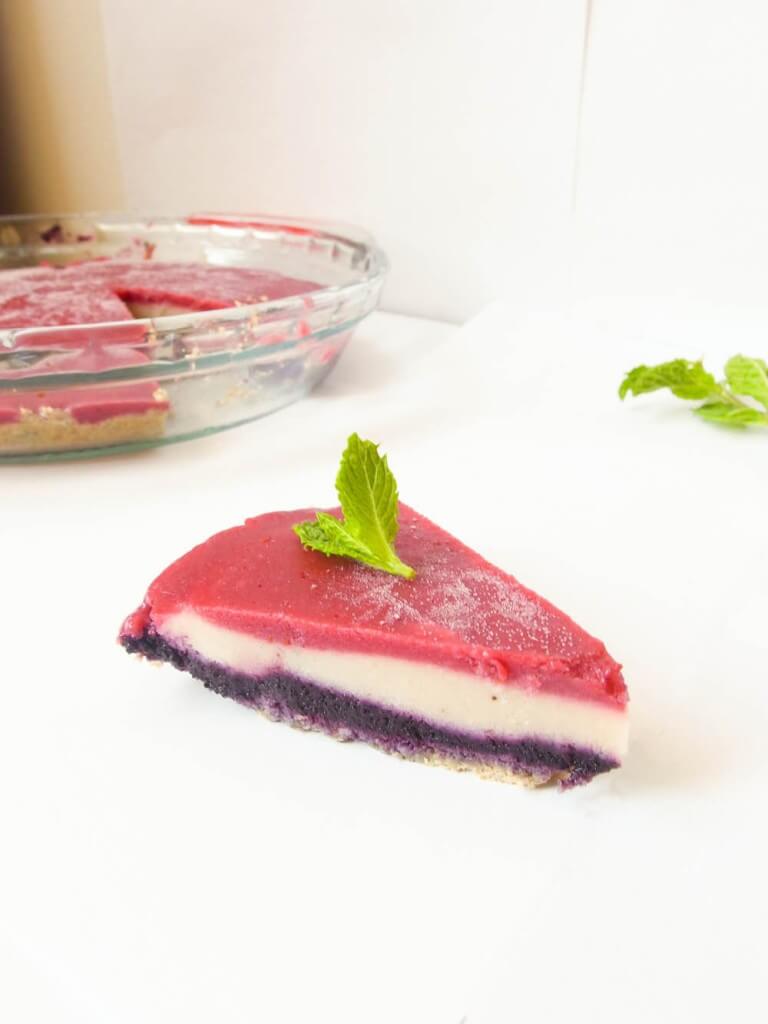 On the topic of non-dairy yogurt, this is a berry yogurt tart after all… so the yogurt flavor is fairly prominent. Which I love! But that means that you need to love the non-dairy yogurt that you’re starting with, since the flavor will carry through. For the best texture, you’ll want to select a Greek-style option, preferably almond or coconut-based (I used cultured coconut milk – which is the option that I most strongly recommend). The higher fat content and lower hydration level will prevent the tart from getting icy in the freezer.

We had a new Harris Teeter’s location open up in Baltimore; I was in the neighborhood visiting a friend and stopped in to check out their selection. Lo and behold, I found plain, UNsweetened nondairy yogurt there, which is something that I have never before seen sold in the city – not even at Whole Foods. I guess I will probably be back! Either that or I’ll get the hang of making my own =]. 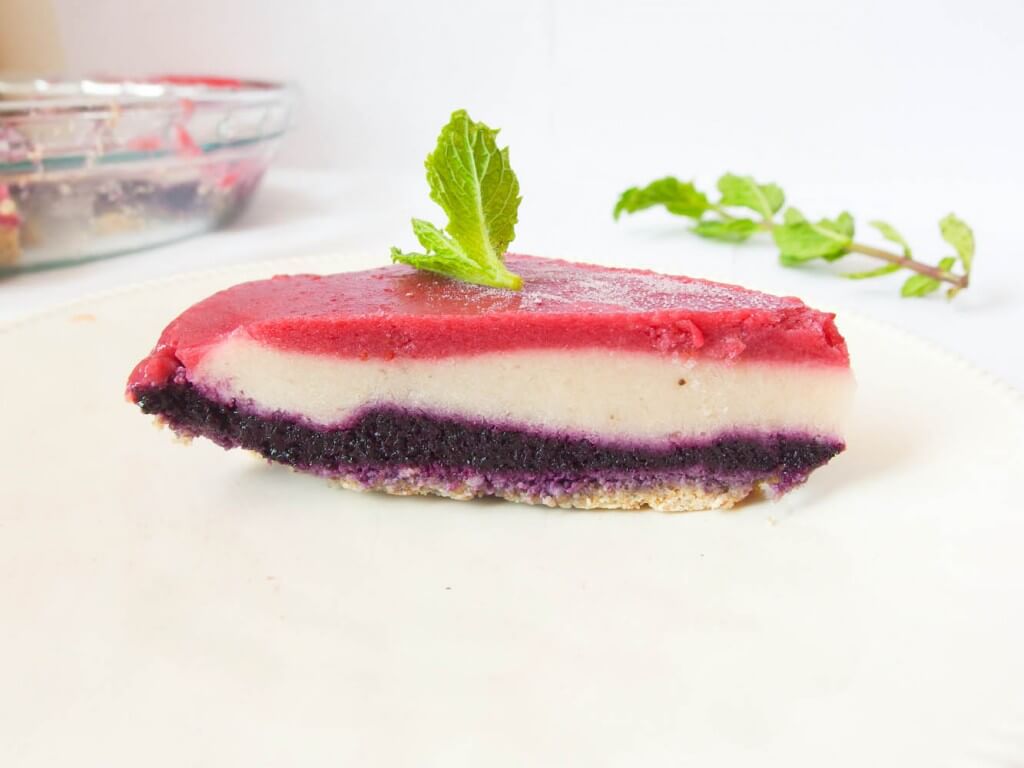 I actually made this a few weeks back, since I thought it would take more tries to come out right. I used frozen berries. If you want to make this and are using fresh berries, you may need to fiddle with the amount of sweetener and liquid. I am confident it will still turn out well. Due to the alcohol content in the berry layers, and the higher fat content in the yogurt layer, it will freeze to a soft and dreamy texture. Trust me on this one. I fed it to a whole group of dairy-eaters and they went nuts over it. Between this yogurt tart and the chewy coconut cookies, I’m starting to suddenly have more friends than I used to…

I’ve provided a substitution options for those who want to use less or no alcohol for whatever reason. You may have already observed that it’s kind of a pain to make it because the multiple layers have to set in the freezer. Luckily, the hands-on time is not too much. For U.S. readers, this mixed berry yogurt tart is perfect for celebrating Independence Day! For non-U.S. readers, it’s objectively delicious. 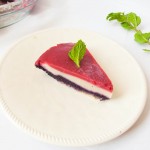 For the balsamic blueberry layer:

For the yogurt layer:

For the strawberry pinot noir layer:

For the balsamic blueberry layer:

For the yogurt layer:

For the pinot noir strawberry layer:

ALCOHOL-FREE: To make without alcohol, use a fruit juice of choice in place of the wine in the strawberry layer. Double the amount of vanilla extract and almond extract, and stir them in after cooking instead of cooking them in with the mixture. (The small amount of alcohol content in the extracts will help the texture of the frozen dessert). OIL-FREE: I originally made this recipe oil-free, so I know it will work if you just omit the oil. But the texture will be a little icy, especially in the berry layers. If you're comfortable cooking with oil, I recommend using it. NUTRITION: Nutrition facts exclude the graham cracker crust. 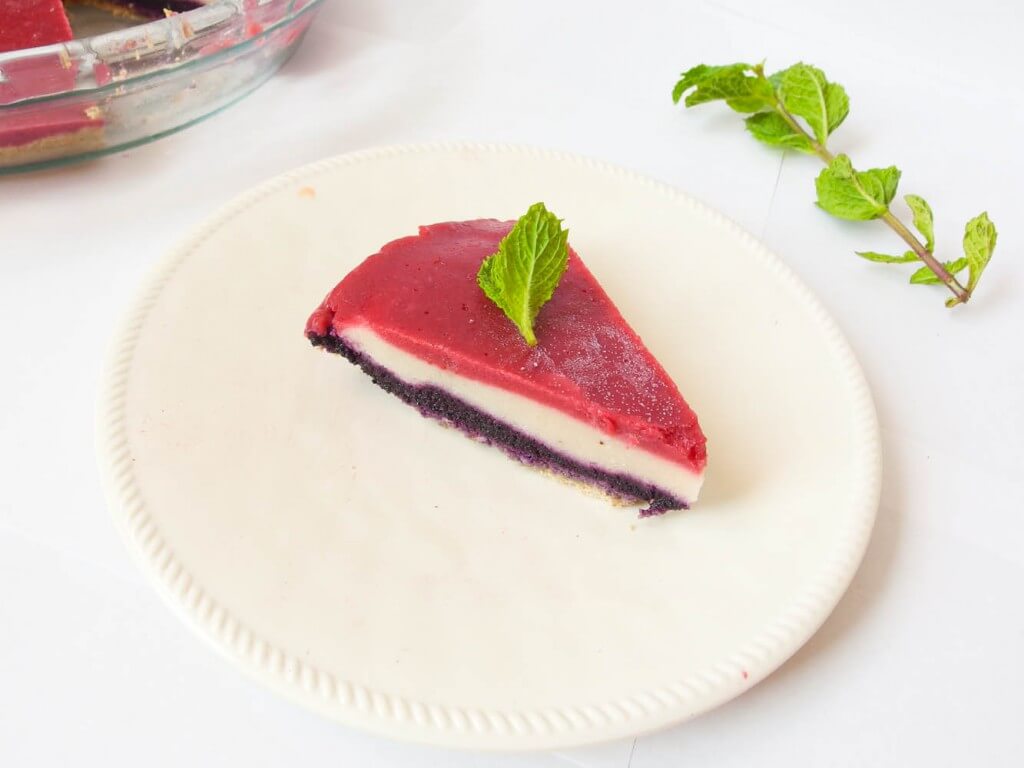