If you were to ask my friends what my favorite food is, they would tell you potatoes. I’ve earned a bit of a reputation as a potato fiend, not least of all because of my impressive ability to eat mountains of tater tots. I make homemade French fries once a week at the moment. I’ve been known to microwave a potato, sprinkle it with salt and pepper, and call that dinner. But I’ve also spent two hours making a beautiful shepherd’s pie with all of the bells and whistles. Basically, I love potatoes for any occasion and I never get tired of cooking or eating them*. Case in point: I just recently discovered a brand new potato technique, which I used to make these loaded smashed potatoes. 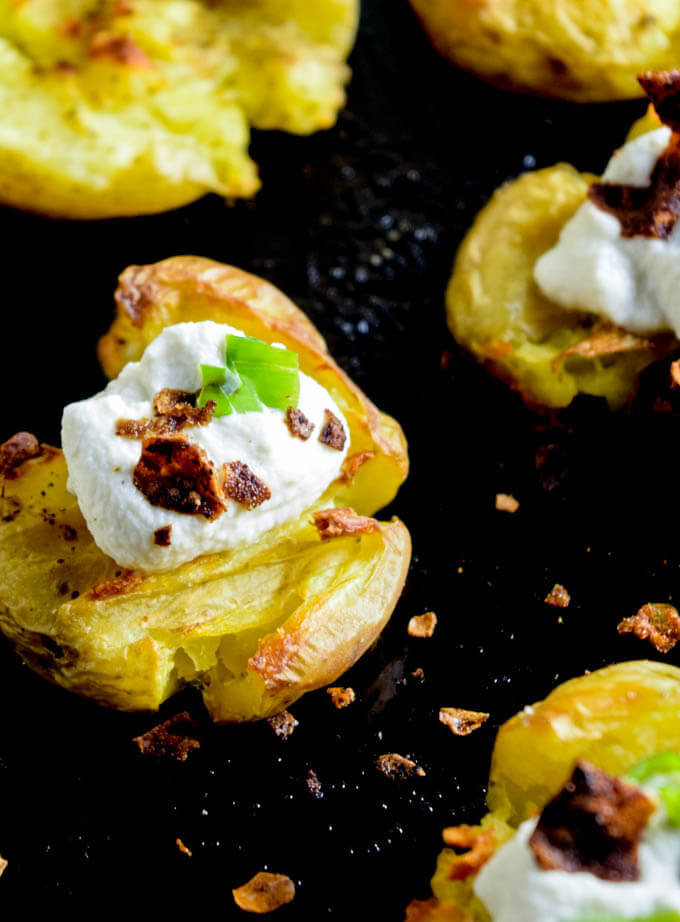 *This lack of potato fatigue comes in handy when French fries are the only vegan option at restaurants.

To make ‘smashed’ potatoes, smallish potatoes are boiled until tender, smashed to flatten, and then baked at a high heat until crispy on the outside and fluffy in the center. And like most things potato (not that I’m biased) it’s incredibly delicious.

If you’re looking for something more than just delicious, turn them into loaded smashed potatoes! These are basically a twist on loaded baked potatoes with the fixin’s. I topped each smashed potato with tangy cashew cream instead of the typical dairy sour cream, liberal amounts of chopped green onion (chives are also great), and (I saved the best for last here) crumbled rice paper bacon. If you haven’t tried the rice paper bacon yet, I’ll wait here for 30 minutes while you go make it. You won’t regret it! 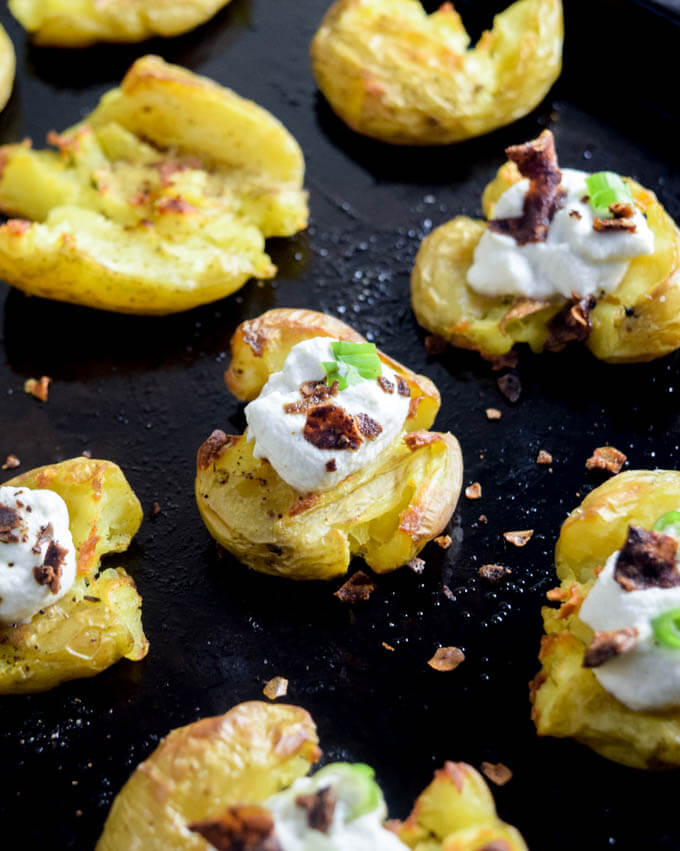 If for some reason the RPB isn’t to your preferences then substitute something else salty with a little crunch, or just omit it. For the batch of loaded smashed potatoes pictured here, I ate all of the extra rice paper bacon before I got to the leftover potatoes, so I ate them with cashew cream and ketchup… that’s my potato game. Customize these and make them your own! They’re great with whatever you’d normally put on a baked potato, but wrapped into cute little handheld morsels. 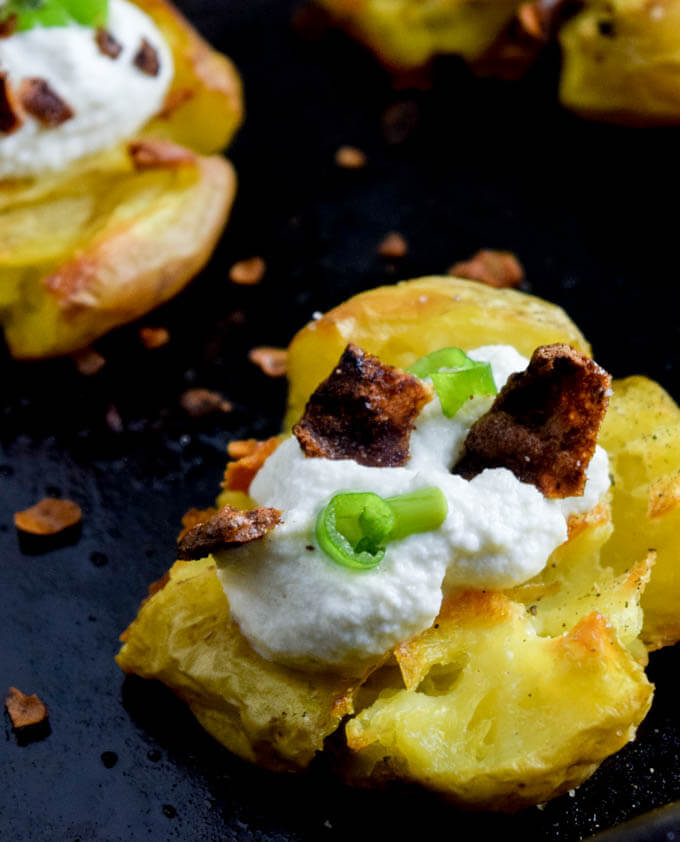 I hope you give these vegan loaded smashed potatoes a try! And by the way, I love recipe requests. Is there a favorite potato dish that you’d like to see shared on my blog? Let me know! I’m willing to make the sacrifice of being a potato recipe tester 😀 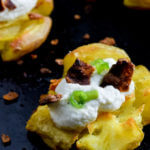 For the loaded smashed potatoes:

For the cashew cream (makes extra):

For the cashew cream:

Cooking time will vary depending on the size of your potatoes. Nutrition facts are calculated using 1/3 of the cashew cream mixture, and excluding the rice paper bacon.

More potato love from my blog: 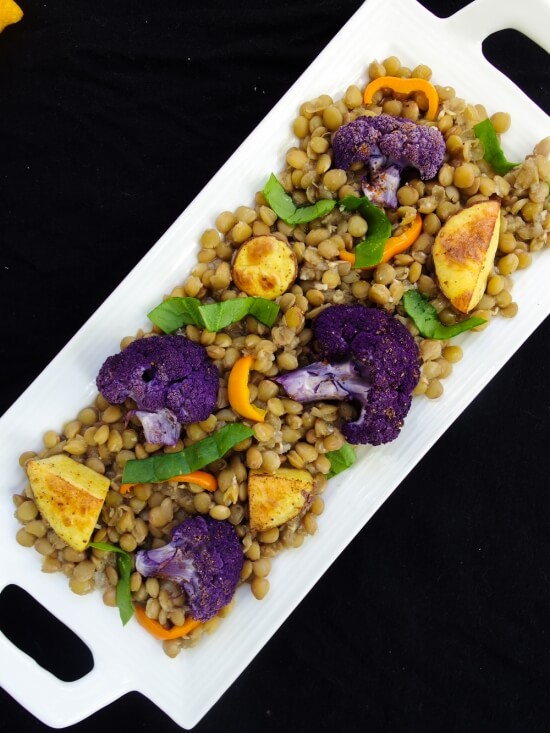 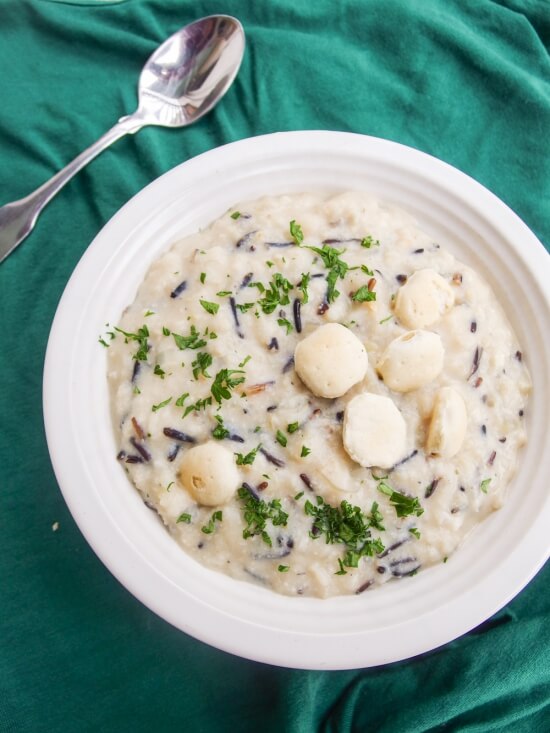