Happy weekend! Today I’m sharing this recipe for rosemary and meyer lemon focaccia as part of the Virtual Vegan Potluck! (Potluck navigation buttons are at the bottom of this post). 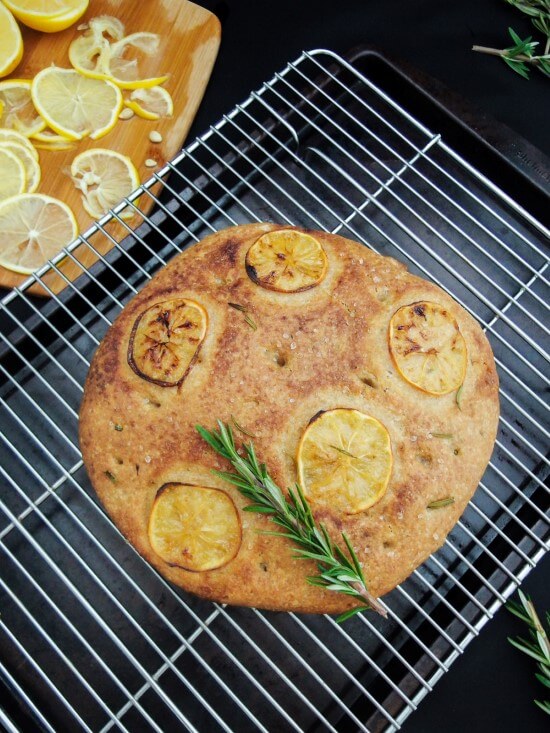 I also made a bread course for the last VVP: this scrumptious beet rye bread. That was my first time participating in the potluck and I got to know a ton of other awesome vegan blogs. It was also (*drumroll please*) my first photo ever to be accepted to Foodgawker. For someone who still, a year later, considers her photography amateur at best, that was a pretty big deal… especially since it was taken with a point-and-shoot! 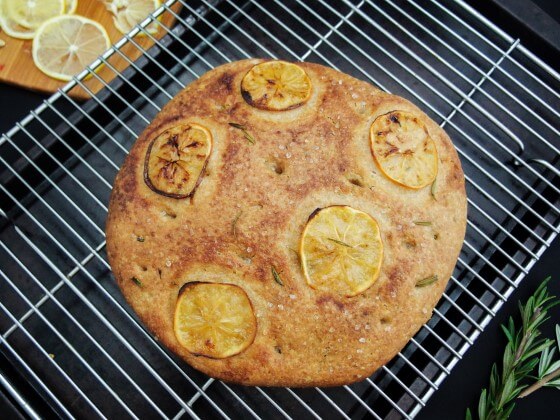 So I made this meyer lemon focaccia last weekend. Having recently gotten back from a fairly long vacation, coupled with the end of CSA season, we are still struggling to restock our refrigerator effectively… I hadn’t had anything to eat yet that day (I know, bad!! And very unlike me) and it was 1 pm when the focaccia came out of the oven. It smelled and looked so good that it was almost heartbreaking to stop to take pictures instead of devouring it immediately. But this decadent bread was well worth the wait. We ended up polishing off the entire loaf that day… I’m not exaggerating; I literally subsisted on only focaccia for 24 hours.

For anyone who thinks focaccia is flat and bland, I beg you to give it another try. I’m pretty proud of the crumb structure of this loaf, which was made with over 50% whole grain flour: 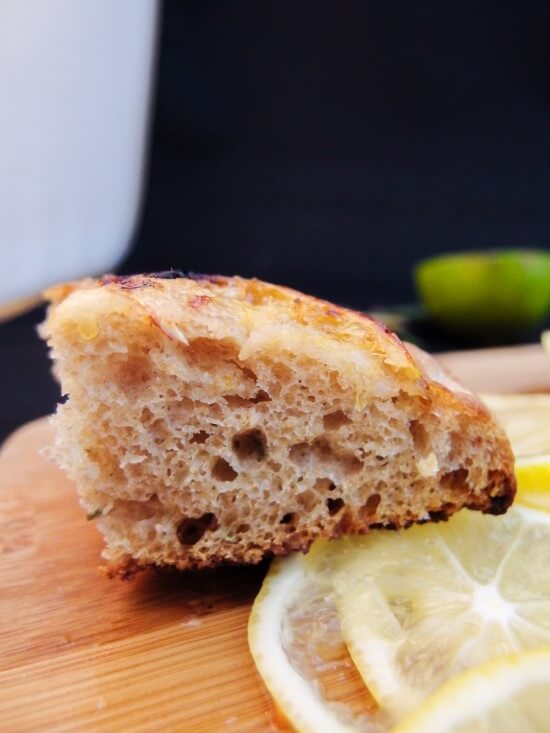 As you can see, not dense at all! The meyer lemon slices caramelized in olive oil and sugar made for a subtle but satisfying bitter note, and rosemary (in my mind) is just a classic focaccia must-have. Now, I wouldn’t say the amount of oil in this bread is “horrifying”, but, the overall recipe would definitely not stand up to an official food pyramid. I will keep trying to make a lower-oil version, but I’m not making promises…

This recipe makes two batches of dough. There are enough steps to making the bread that I think preparing two batches is worthwhile. Yes, the dough has to rise approximately one million times. Yes, you have to start like a day and a half in advance. YES, it is worth it! The unbaked dough freezes well. And the dough itself only has a bit of oil, so if you are tired of focaccia, you can easily roll it out to use as pizza dough or something of the sort. 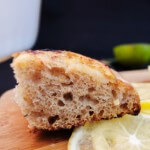 For the spelt sponge:

For the dough (makes enough for two loaves):

For preparing and baking one loaf of rosemary and meyer lemon focaccia:

To prepare the spelt sponge:

To prepare the focaccia dough:

To prepare and bake the rosemary and meyer lemon focaccia:

And now, the part you’ve been waiting for! The rest of the Virtual Vegan Potluck. Click below to move forward or back in the potluck, where you’ll find vegan recipes by tons of other bloggers! (Note: these used to be images but sadly, the images have been taken down so I only have text links now.)