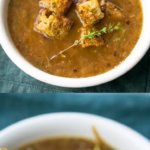 By meticulously layering umami flavors, I’ve crafted a vegan French onion soup that’s loved by meat eaters and a convincing stand-in for the real thing. You’ll just have to try it to believe it! 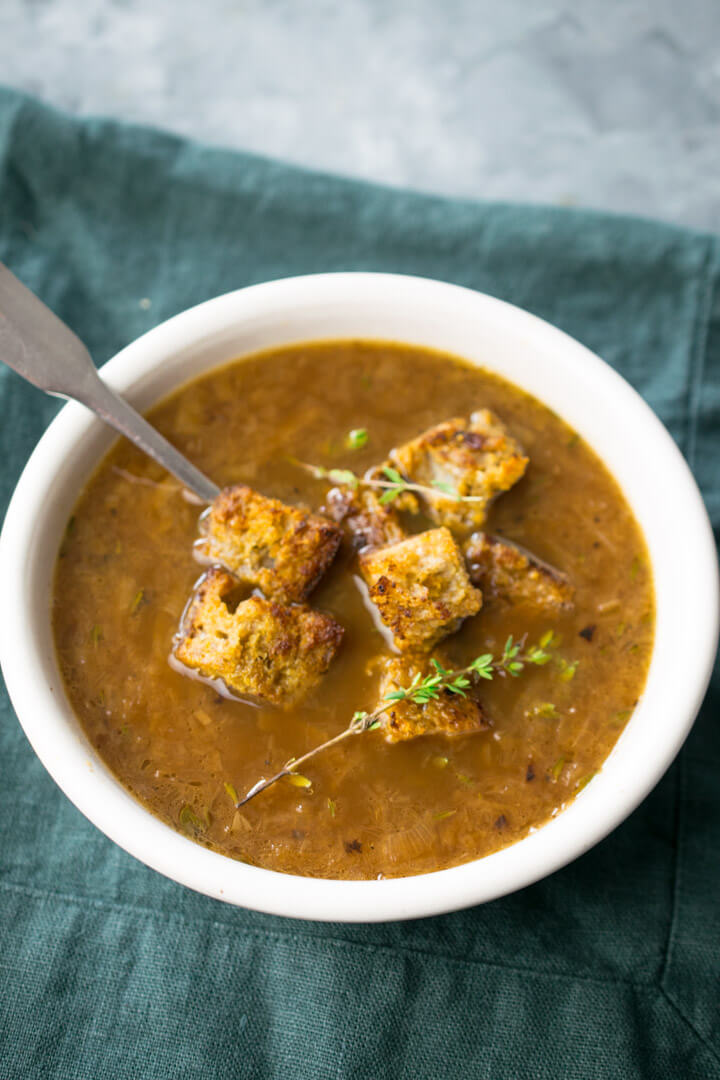 Vegetarian French onion soup is one of those things that I assumed for a long time would be excluded from my life forever. As a dish that basically revolves around beef and gruyere cheese, there’s not much a vegan can do.

I’ve seen vegan French onion soup recipes online and I’ve just never been convinced that it would be worth making. For the most part they just sound like vegetable soup, often with gross looking vegan cheese on top. Y’all know I don’t settle when it comes to these matters. Things changed when I saw that America’s Test Kitchen had created a meatless onion soup recipe. There are a few recipe sources that I trust strongly, and ATK is one of them. They test everything a lot and have very high standards for their plant-based fare.

I’ve modeled my own vegan French onion soup off of the one from ATK, although I’ve made many changes, including to eliminate the mushrooms. To make a plant-based version of this classic French soup, here are the components you’ll need:

Homemade umami croutons, made with fresh sourdough bread and tossed with a smattering of savory seasonings before roasting to golden brown perfection. These croutons take the place of cheese-topped bread in our plant-based soup. 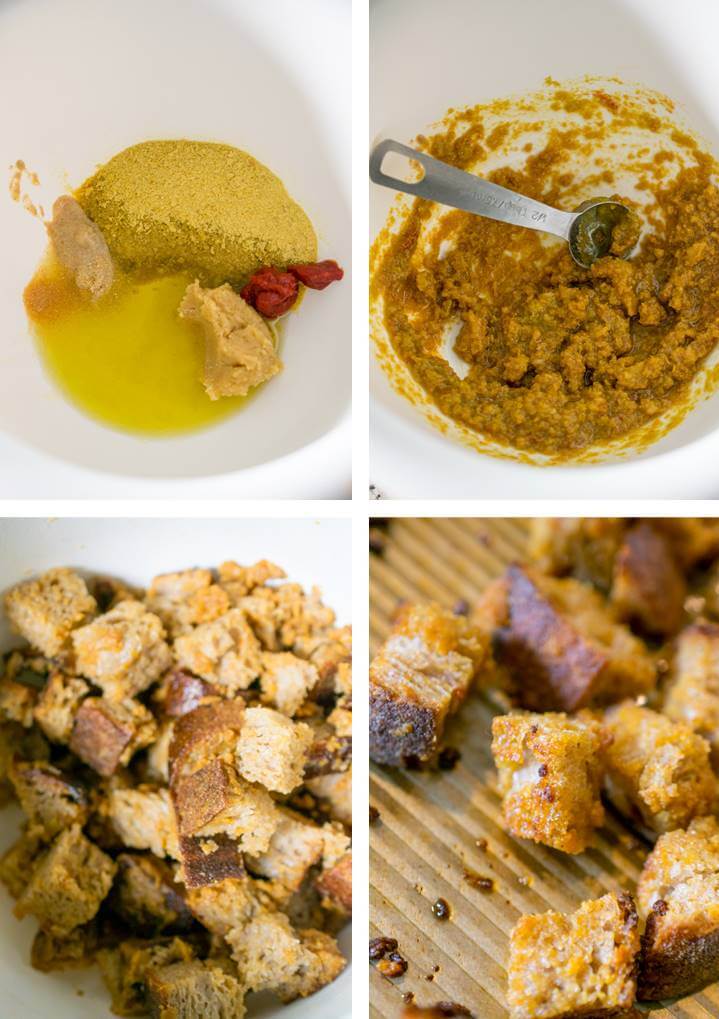 Perfectly caramelized onions, slow-cooked the proper way. I make my caramelized onions in the oven as of late, so I’ve included those instructions here, but use your preferred method. Just don’t rush the process. There is literally, from a scientific standpoint, no way to caramelize onions rapidly. Shortcuts provide an inferior product. 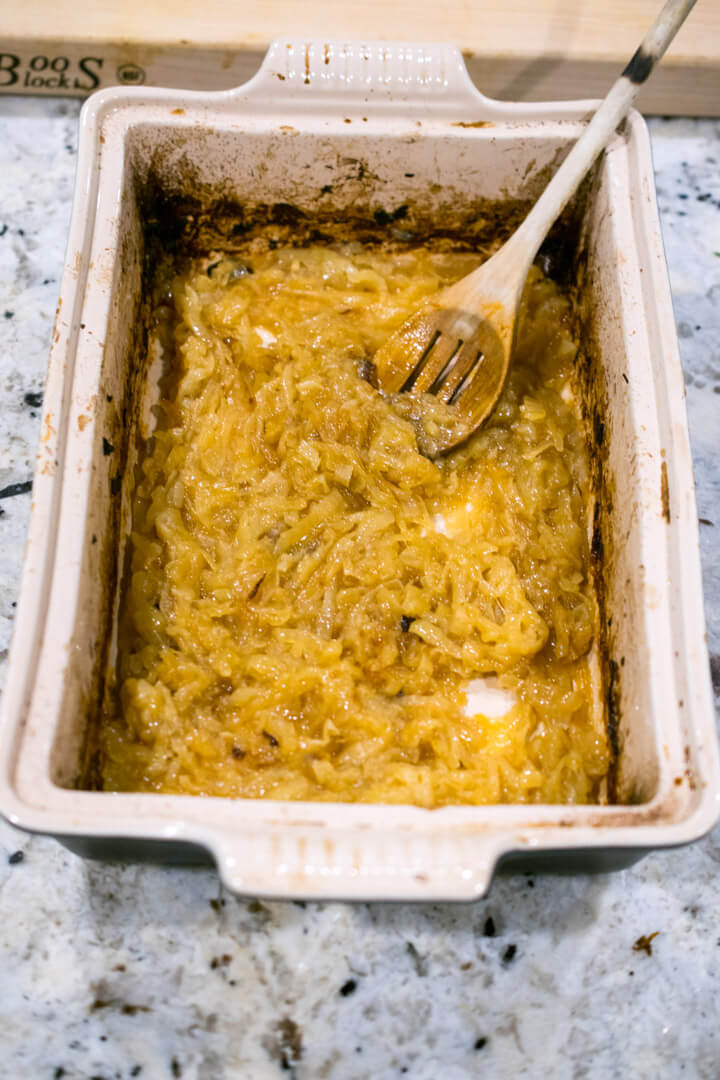 Vegan beef broth to simmer the onions in. I highly, highly recommend making my homemade vegan beef broth which requires sourcing a couple of odd ingredients but is so, so deep/rich/flavorful/amazing. However, if there is a store-bought beef-less broth that you like, you can use that instead. 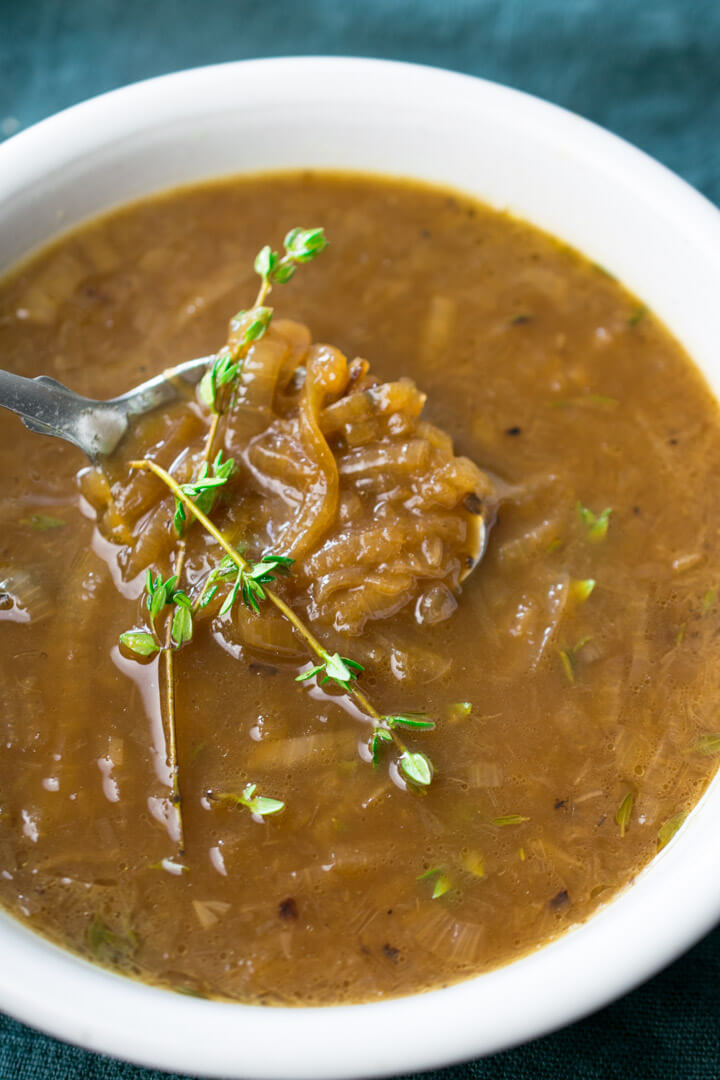 A splash of dry sherry is a crucial counterpoint to the sweet flavor of the onions.

Fresh thyme and bay leaves are simmered in the soup to infuse a hint of freshness. 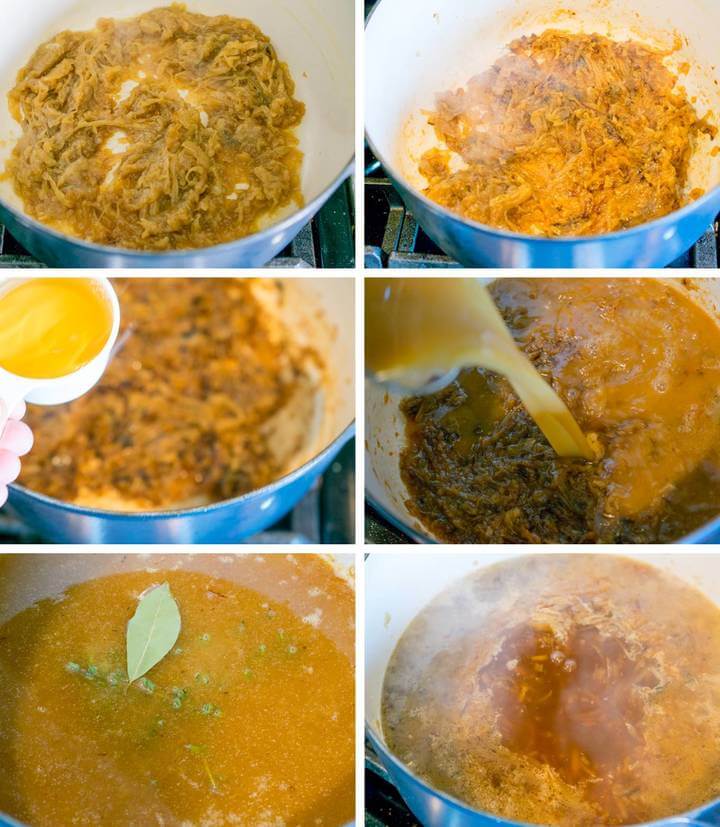 Is this vegan French onion soup easy to make? Hmm, depends on your definition. There are definitely several steps involved in this recipe and it certainly isn’t quick. There’s not really any way to speed it up with the Instant Pot or make it more hands-off with the slow cooker, so I would say that labor is required. It is pretty simple in terms of technique, though, so I believe that most home cooks should be able to prepare this. A lot of the time is spent just relaxing and waiting for onions to cook, so put on some music and enjoy!

Most importantly, this recipe is just the best. I’ve been disappointed by all of the vegan French onion soup that came before and after this one, but this is the real deal. Obviously, this is not 100% authentic French food, but I’m proud to say this recipe is incredibly flavorful and rich without any animal products or waxy fake cheese. 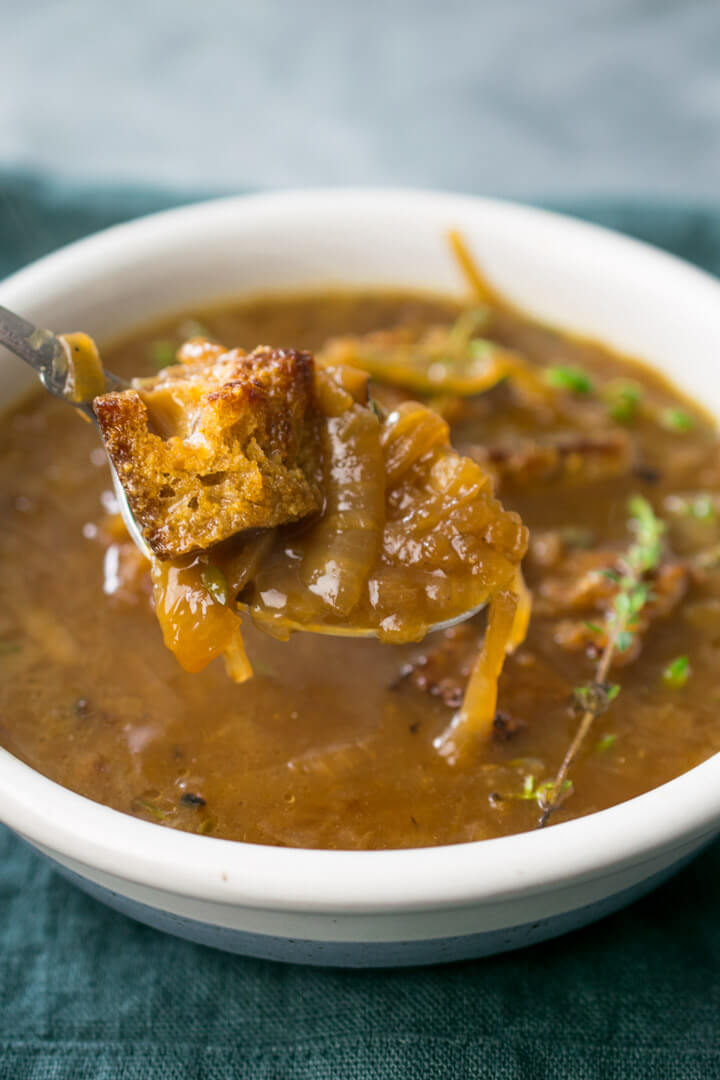 I’ve been keeping this recipe from you for literally a year. I was making it regularly during Pandemic Autumn #1 and even fed it to a bunch of meat eaters [in my quarantine bubble] for Christmas, but didn’t get around to publishing it until today. I hope that you enjoy it! 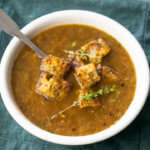 MAKE AHEAD: The onions, croutons, and homemade broth (if using) can all be made in advance and stored for a couple of days, which means that soup day is actually pretty quick.   BREAD CHOICE: I always use my boyfriend's homemade 50% whole wheat sourdough for these croutons, and it's simply amazing. Any type of sourdough will be great here, but do try to use bread that isn't pre-sliced; it will be much more moist and flavorful.   CARAMELIZED ONIONS: Use a stovetop caramelized onion method if you prefer or don't have time to use the oven method. However, be sure to use the full quantity of olive oil listed in the recipe, as it is necessary for the flavor and texture of the soup.    BROTH: My homemade vegan beef broth is what makes this recipe truly stupendous. However, if you need to use a premade option, I urge you use to use something labeled as beef-style broth, rather than vegetable broth. A vegetable broth would need to be doctored up with high-glutamate ingredients to provide the desired flavor.   NUTRITION: Recipe nutrition facts include the croutons.