Alright, this recipe was a long time coming! Back in September 2013, I was craving the Trader Joe’s Soy Chorizo and couldn’t get to a TJ’s. So I found the ingredients list for inspiration, and figured out how to make a copycat version myself. The results were completely delicious and I shared the homemade soyrizo recipe on this site. Since then it has continued to be a popular post; I guess a lot of people were looking for a great vegan chorizo recipe! (And while we’re talking about copycat recipes, have you tried my copycat Chipotle Sofritas yet?) 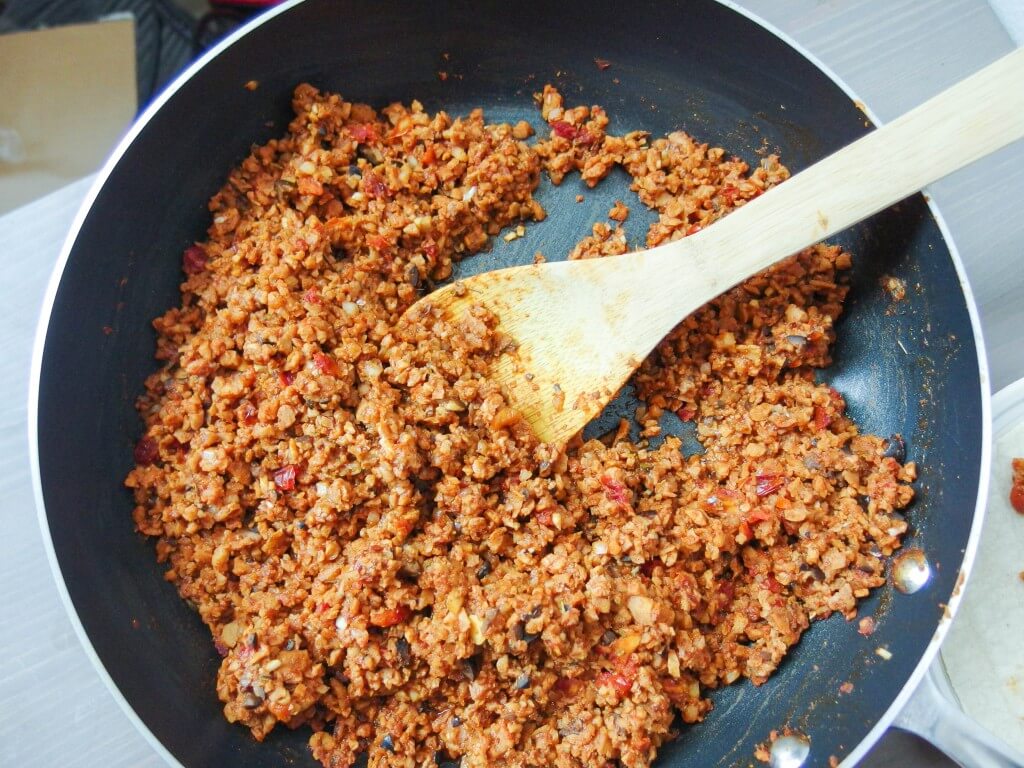 I always felt a little guilty about that, though. You see, the recipe itself is fine – the instructions were correct and reliable – but the procedure for making the soyrizo was unnecessarily complicated and weird (have you ever seen the word ‘pseudobroth’ before?), and I didn’t have a single large/clear/helpful picture of the soyrizo itself. So in the back of my mind I’ve really been wanting to remake it and provide you with streamlined instructions and better photographs.

Then, I caught wind that the Trader Joe’s soyrizo has supposedly been discontinued (yes, Reddit is my official source). I was thinking about how I hadn’t seen it at my local TJ’s lately and did a quick search, which led me to that thread. So I knew that it really was time to make the at-home version again.

Update 4/3/14: A reader let me know that soyrizo is back in some Trader Joe’s stores, but now contains milk as an ingredient =/. I will continue to keep an eye out for the latest soy chorizo news and always update it here. But in the meantime, there’s now even more of a reason to make it homemade!

Update 6/2/14: Good news! It looks like the Trader Joe’s soyrizo recipe was revamped again, and it has returned to being vegan. You can still save money by making your own soy chorizo, though!

Soy chorizo is also sold at Walmart, and while I have not tried those brands, I feel confident that this homemade version will blow them out of the water, too, in terms of price and taste! 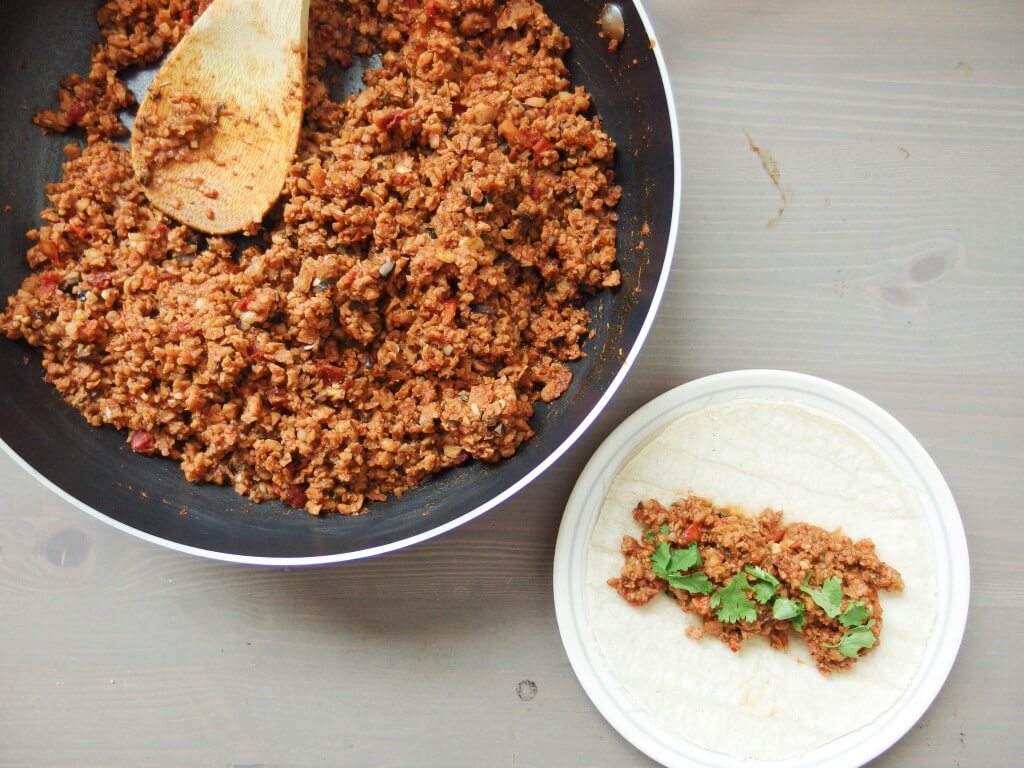 I’m still not gonna be nominated for a photography award anytime soon, but at least I have a better camera and lighting setup now, so I hope these new pictures are more helpful. And I KNOW that this updated recipe is much easier to read, and follow. Plus, I made exact measurements of my spices this time around so that you have a better starting point for those. To make your homemade soyrizo, you’ll need Textured Vegetable Protein (TVP), a soy product. TVP is available at most grocery stores in my area these days, and also easy to find online. Everything else is basically pantry staples and spices.

Where to use soy chorizo

Traditional chorizo is a type of spicy sausage that originates in Spain and Portugal. I did a great deal of research to develop this recipe to use traditional flavors, except vegetarian! The “real thing” is usually sliceable and can be pan-fried, but my vegan chorizo is crumble-style, so choose recipes that already call for ground meat.

Soy chorizo is amazing in tacos, burritos, and other places that ground meat would be used. You can also making a pretty bomb soy chorizo chili. Stir in the soyrizo toward the end of cooking your favorite tomatoey chili recipe so that it keeps all of its delicious spicy flavor.

So here it is. The streamlined, delicious-as-ever homemade soyrizo recipe. I hope that you’ll give it a try 🙂 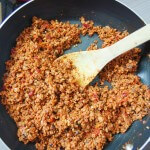 TVP is a soy product and I've seen it in well-stocked grocery stores; usually Bob's Red Mill brand. It's under $4 for a bag that will make this recipe several times over. You can often find it for even cheaper in natural stores' bulk sections. I've never tried using a substitute but I imagine you could use something else with a "meaty" texture as long as you adjust the amount of liquid appropriately. If your sun-dried tomatoes are packed in liquid in oil, rather than dry, drain them before using and skip the step where you hydrate them along with the TVP. SPICE LEVEL: This soyrizo is quite hot. If you haven't made it before, I recommend leaving the cayenne OUT and adding it to taste, little by little, at the end of preparation. Then you'll know how much you want to use next time. But please know, this recipe is supposed to be very spicy.

Psst.. my vegan chorizo is great with some cauliflower queso 🙂 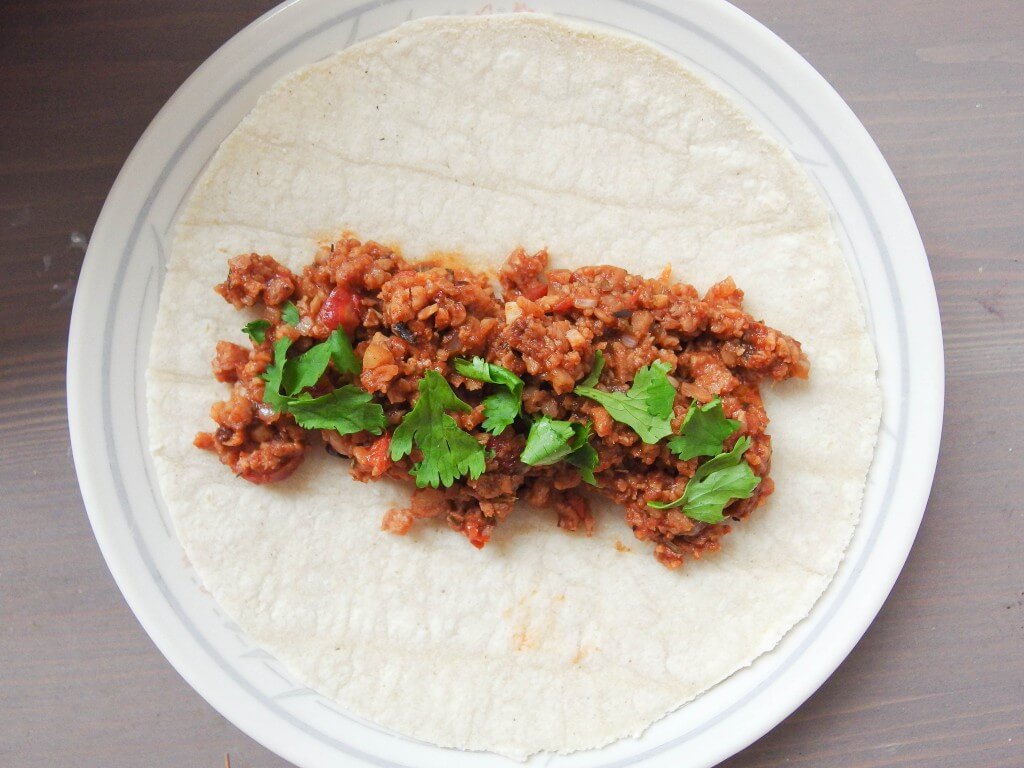