As I mentioned in my post about teriyaki (vegan) meatballs, more than anything else, the Super Bowl is an excuse for my to bring my vegan finger foods A-game. I’m sure that a lot of you are the same way 🙂 Most things are delicious when deep-fried, but there’s something extra fun about these beer-battered Brussels sprouts. They’re crispy on the outside, and the inside is tender without being mushy. Paired with a homemade maple-mustard sauce, these disappeared really quickly. 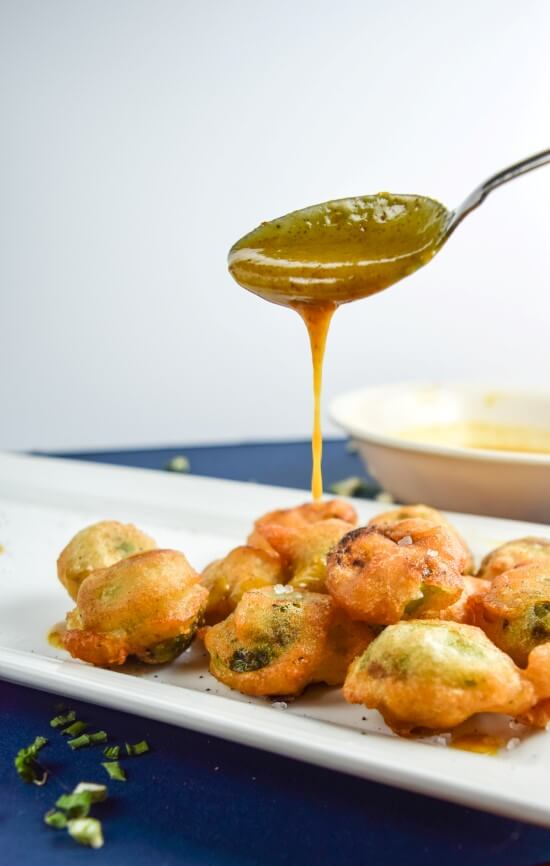 Beer-battered Brussels sprouts served up with a smoky, sweet and salty maple-mustard sauce!

As far as the nutrition facts for this recipe, uh, I’ll just briefly point out that at least these will give you a serving of vegetables for the day – leafy greens at that! No guilt here, the Hawks are in the big game and that’s reason to celebrate! 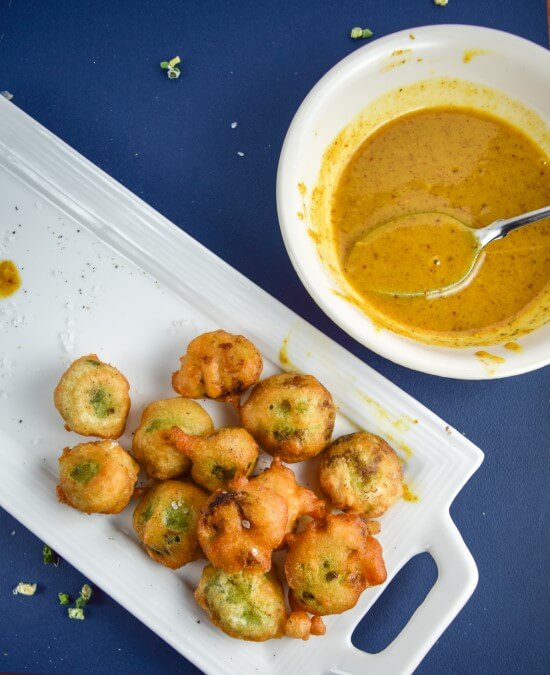 I don’t make fried foods at home very often (I believe my previous fried recipe on the blog was the Chipotle-style tofu sofritas in July 2014, and that was pan-fried, not deep fried). So I don’t own a dedicated fryer or anything like that. I simply take my largest skillet and fill it with a couple of inches of oil, and use a thermometer to control the oil temperature. Making sure that the oil is very hot, and that you don’t crowd the pan (thus reducing the oil temperature upon adding the ingredients to it), is essential if you want to minimize the amount of oil that you actually end up eating.

My most-fried food is probably gobi manchurian, a spicy Indochinese fried cauliflower dish… but I’m really pleased with the fried Brussels sprouts results and think I’ll continue having these from time to time.

I’m sure you’ll enjoy the beer-battered Brussels sprouts paired with any sauce you like, but in particular I recommend the maple-mustard sauce recipe I included, or a creamy sauce, like a vegan chipotle mayo. You want something with some body and not too aggressive of a flavor. As far as what beer is best in this batter, most beer works, but I suggest lager. I would avoid anything with more pronounced bitter undertones (such as coffee stout…) since the Brussels sprouts already add a bitter note. 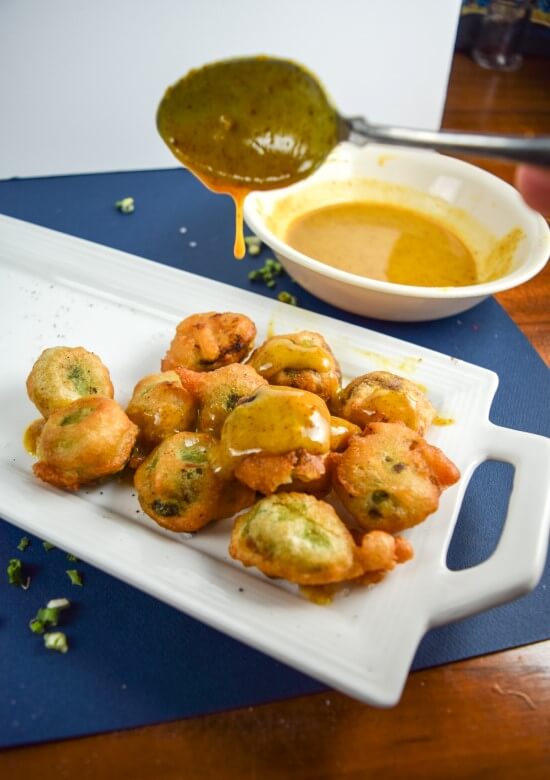 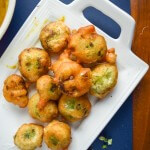 For the beer-battered Brussels sprouts:

For the beer batter:

For the maple-mustard sauce:

To prepare the maple-mustard sauce:

To blanch the Brussels sprouts:

For beer-battering and frying the Brussels sprouts:

I haven't tried it, but gluten-free all-purpose flour would probably work. Same goes for gluten-free beer.

Fried Brussels sprouts technique adapted from We are Not Martha. This post contains an affiliate link; see my advertisement policy for details. 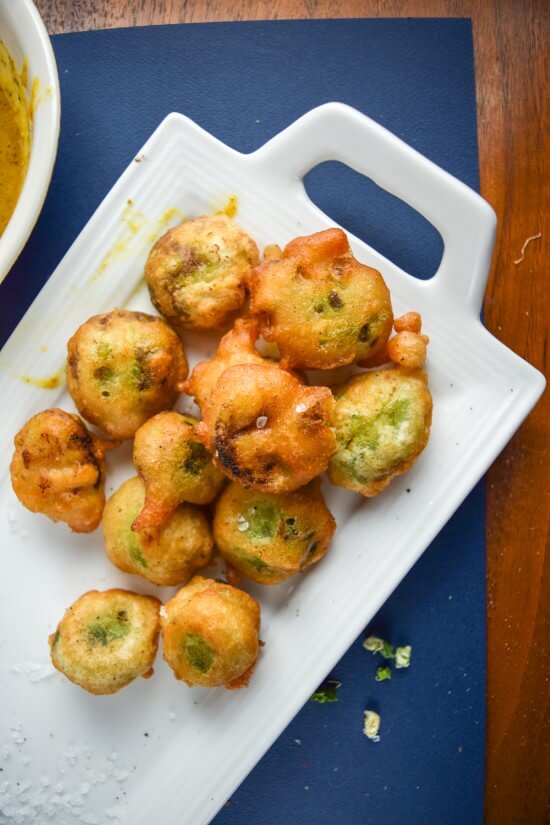 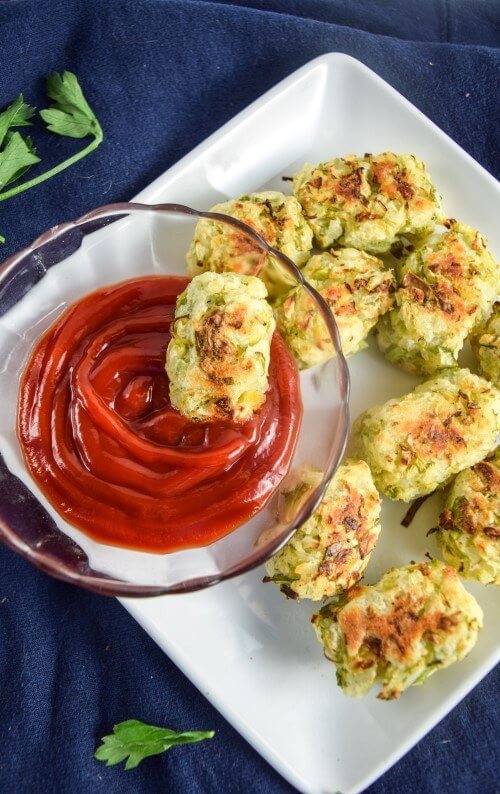 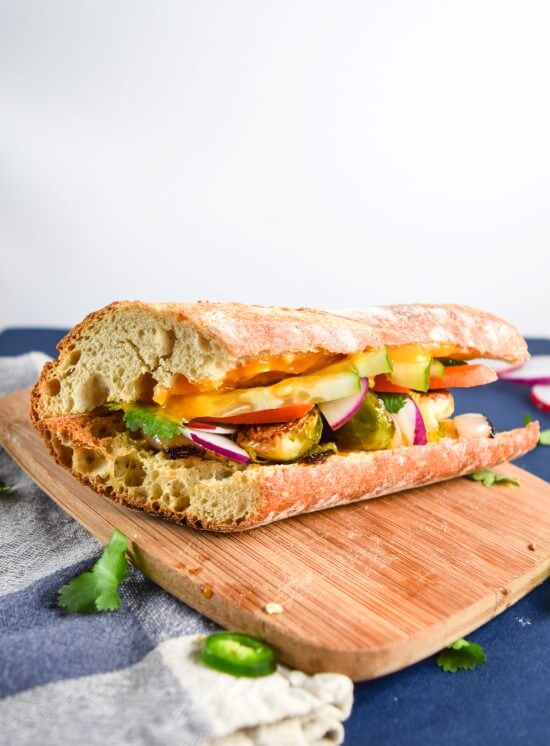