This recipe for black-eyed pea and collard green chili comes to you from Vegan Pressure Cooking: Delicious Beans, Grains, and One-Pot Meals in Minutes, the recently-released new cookbook by JL Fields (of Vegan for Her and the blog JL Goes Vegan). See the end of this post for the recipe, and my review of the cookbook follows hereafter. 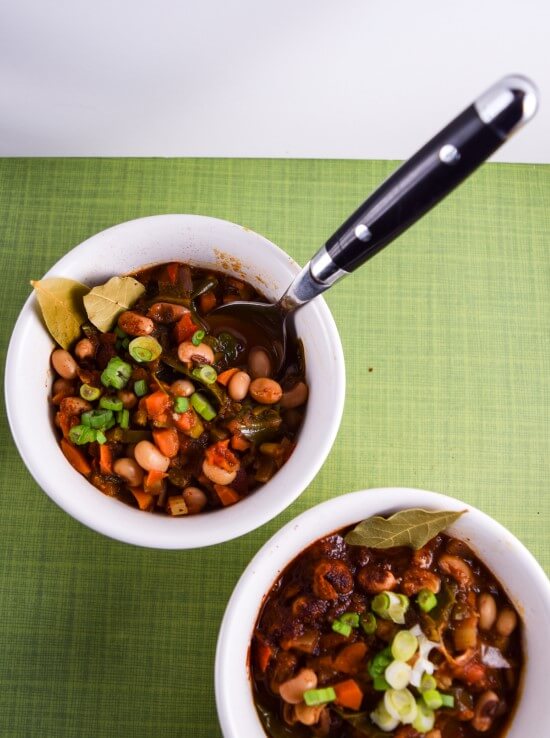 For those of you who don’t use a pressure cooker, it’s a kitchen implement that can be either stovetop or electric, and is designed to seal in the contents with tremendous amounts of pressure, created by trapping steam released by the liquids being cooked, which allows your foods to cook much more quickly than they would if you were simply boiling them in a covered pot. It tends to also cook foods very evenly in addition to using less total energy than other cooking methods.

I bought my pressure cooker my pressure cooker several years ago after watching a Good Eats episode about chickpeas and realizing that it was the key to making my homemade hummus as smooth and creamy as possible. (The one linked is the same one I own – but I bought a factory reject with a dent in the side from eBay for about $40; it has served me well for years now!) I quickly learned that it has many uses beyond cooking chickpeas in a reasonable time frame. In addition to preparing other legumes, grains, and heartier vegetables like potatoes to perfection, it can also be used for complete dishes like soups and stews.

Vegan Pressure Cooking explores those concepts and more between its pages. Inside the book, you’ll find:

Because I am already rather experienced with using the pressure cooker to prepare many of my staple ingredients, I was most excited to try some of the complete-meal recipes included in the book, which is what led me to this black-eyed peas and collard green chili. We really enjoyed this dish. I love how PACKED with vegetables it is, and the collard greens add tons of nutrition and hold up really well when pressure cooked. I daresay my ultimate vegan chili recipe (recipe coming… someday) would still defeat this one in a chili-off, but, this one is easier to make and better for you.

I was a little surprised at what seemed like a large amount of tomato in the ingredients, but it came out with just the right amount of tomatoey tang in the finished product. Cooking the black-eyed peas along with the tomatoes (due to their acidity) allows them to keep their shape, while being creamy and tender on the inside. The leftover chili kept very well in the fridge for nearly a week (maybe longer, but we ate it all!). We got about 5 servings out of the chili and served it with Amanda’s gluten-free cornbread (which was really great too!). 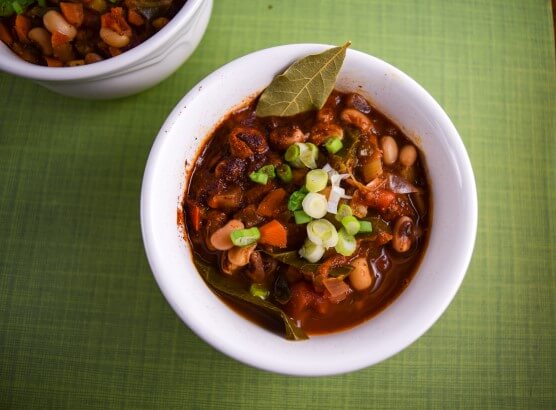 I also made some other recipes from the book that I have not pictured here.

Some other recipes I’m looking forward to trying next are the jackfruit enchiladas, coconut-ginger black bean brownies, and Szekely goulash. I grew up in an Eastern European family but I somehow haven’t had goulash since I went vegan! This particular recipe calls for vegan sour cream, of which I don’t buy or enjoy the store-bought version. So it’ll have to wait until I successfully make my own at home!

I am delighted that this tome is on the market because I think some people have the misconception that pressure cookers are mostly just useful for preparing meat. Overall, I think it is a useful guide to vegan pressure cooking and has a lot of recipes or recipe ideas that I look forward to trying. That said, here are some of my favorable and less favorable comments:

The publishers of Vegan Pressure Cooking have graciously allowed me to share this delicious recipe for black-eyed pea and collard green chili with you. You can get your own copy of the book on Amazon.com. And you can also visit the author’s, JL Fields, blog, JL Goes Vegan. Happy pressure cooking! 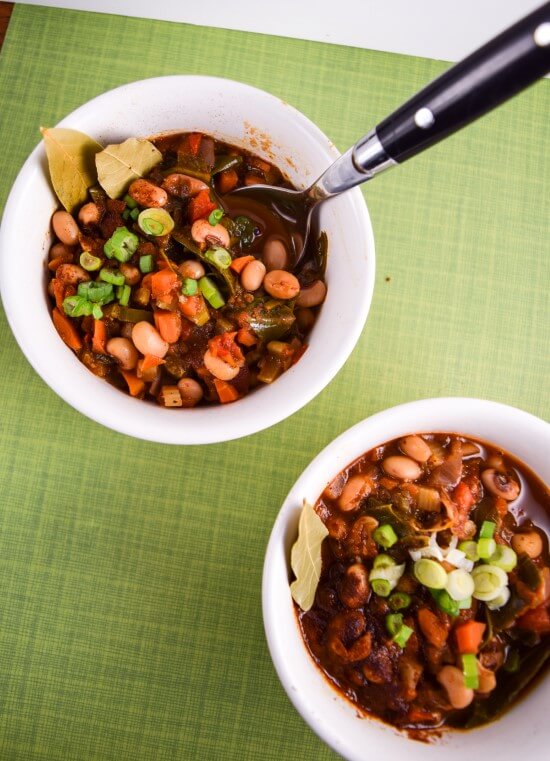 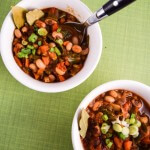 I converted this recipe to use with my electric pressure cooker. I followed steps 1-3 on the stovetop in a frying pan, and then transferred that mixture to my pressure cooker along with everything else that is added in step 4. I cooked at high pressure for 15 minutes. I have a much easier time digesting beans that have been soaked, even briefly, to remove some of the phytic acid. So before cooking, I soaked my black-eyed peas in hot water for about 15 minutes, then rinsed and drained them before getting started.

More pressure cooker and Instant Pot recipes on the blog:

Disclosure: I received a complimentary copy of Vegan Pressure Cooking for review. This post is an honest review based on my experience reading and using it. This post contains affiliate links; please read my advertisement policy for more information.