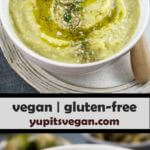 You’ve never had a vegetarian split pea soup like this: creamy, light, and bright with the flavor of lemon, this Lebanese green split pea soup is adapted from Salma Hage’s beautiful Middle Eastern Vegetarian Cookbook. 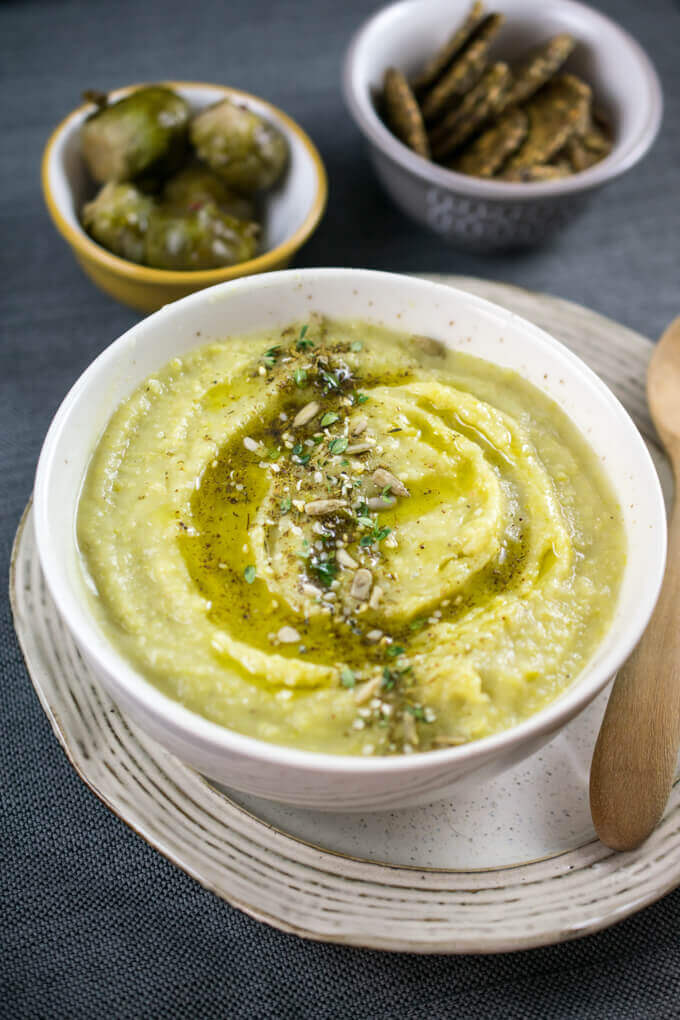 Guilty as charged, I received this book for review last year and though I’ve flipped through it dozens of times (it’s a great coffee table tome) I’ve just finally got to cooking. A lot of the recipes read as rather simple but the flavors have been absolutely luxurious and I’m very excited to try more.

Almost all of the recipes in the book are already vegan or have a listed vegan option. This cookbook is a great investment or gift because it’s gorgeous, with a high-quality hardcover binding and built-in bookmark, but full of approachable and (!) frugal recipes. I splurged on a bottle of pre-made za’atar blend for this humble vegan green split pea soup; but it can be reused for countless other recipes in the book. Everything else included in the recipe was either already in my pantry or only cost a dollar or two. 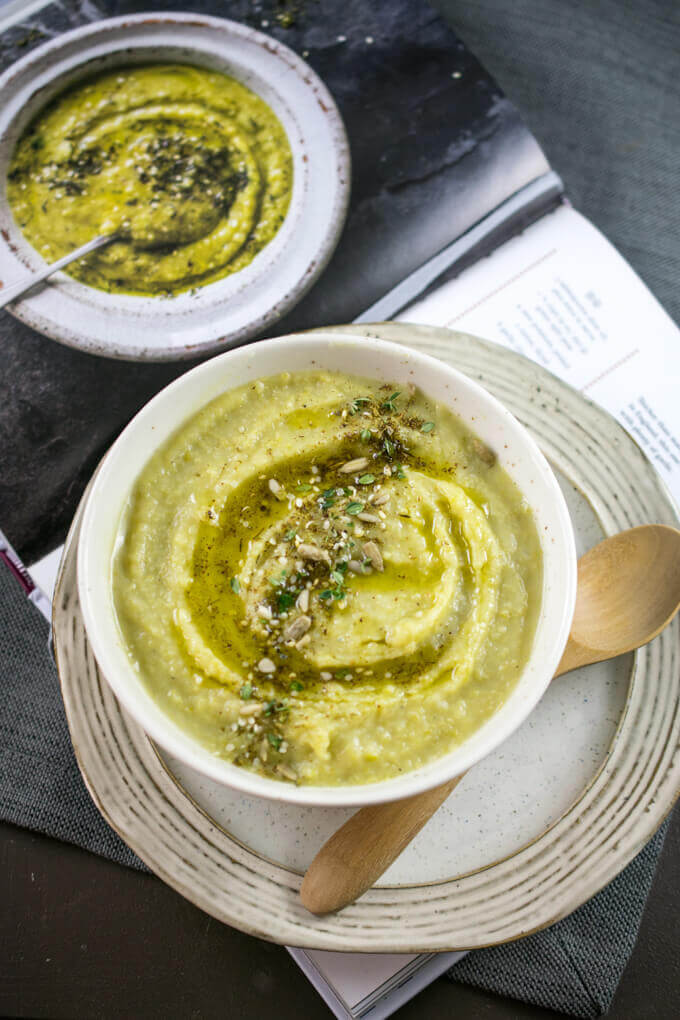 This Lebanese green split pea soup looks EXACTLY like the picture in the book!

When I first read through this Lebanese green split pea soup recipe it felt insane. Par-boiling the potatoes and split peas in separate pots only to combine them and cook them more, and then puree the whole thing? Who came up with this method? I thought to myself that next time I made this Lebanese split pea soup, I’d probably, at least, do the par-boiling together in one pan.

Alas, upon a reread I recalled the reason why potatoes are usually added to cold water before raising it to a boil (so that the centers can cook thoroughly before the outsides turn to mush). Plus, potatoes are better boiled in salted water whereas peas categorically should not be boiled in salted water because their skins will seize up and prevent the peas from getting tender.

Furthermore, as my split peas boiled away and I used a spoon to skim the foamy bean skin that was forming on the surface, it started to dawn on me that the potatoes would have been absorbing all of that bean foam if they were cooking in the same pan. Mmmmm, bean foam. 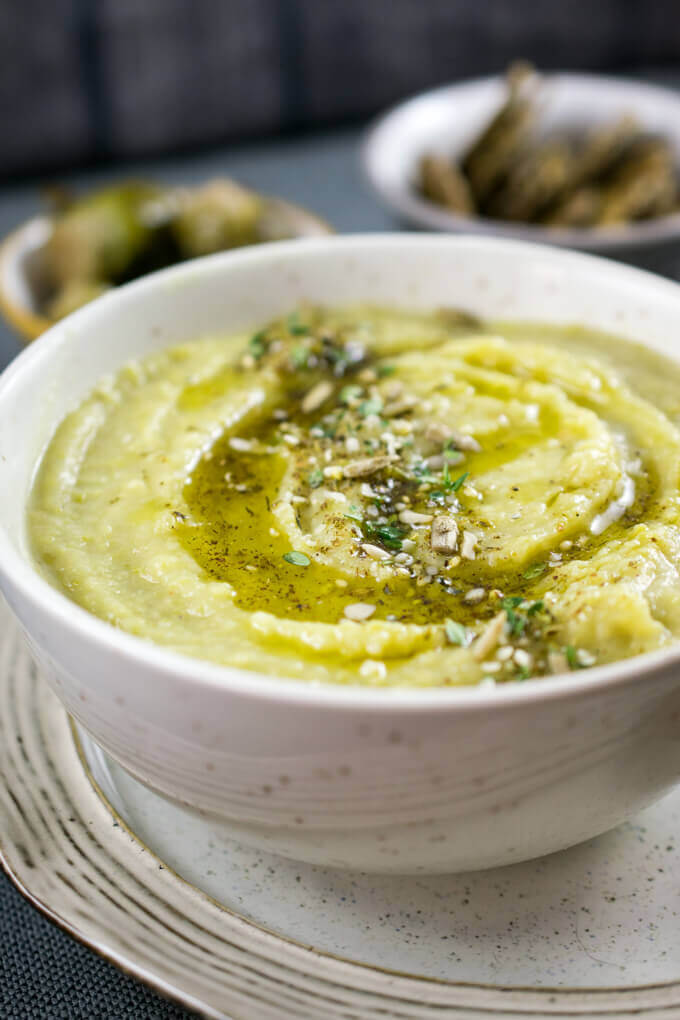 So yes, to prepare this Lebanese green split pea soup as described in the Middle Eastern Vegetarian Cookbook, a little bit of fuss is required. However, I’m now totally convinced that the fuss is worthwhile. Beyond that, the soup is SO good that we had only had a few bites before we started talking about making it again that weekend and saving some portions in the freezer for emergencies. This makes a huge, satisfying batch of split pea deliciousness.

I’ve never had a green split pea soup SO creamy and ethereally light as this one. And given that it contains a hefty amount of potatoes (I increased the quantity from the book ever so slightly (and also reduced the oil)), we felt comfortable enjoying it as a complete albeit light meal, topped with a little bit of extra olive oil. Next time I’ll try blending in some spinach too for more vegetable power.

Because this soup is so packed with flavor from spices, garlic, and veggies, it’s my go-to split pea soup recipe. Rather than try to emulate “ham” flavor with liquid smoke and smoked paprika – and I harbor no ill will toward that approach – this vegetarian split pea stew is flavorful in its own wonderful way.

If you try this amazing vegan split pea soup, let me know in the comments or tag me with @yupitsvegan on Instagram! 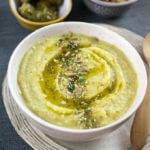 POTATO TYPE: The traditional version of this dish uses new potatoes (use approximately 4 rather than the 3 Yukon golds listed). Even more traditionally, the quantity of new potatoes is doubled. Half of the potatoes, after boiling, are then coated in za'atar and roasted in a 400 degree Fahrenheit oven for 30 minutes until golden, and served as an additional garnish for the soup. RECIPE EFFICIENCY: I've found that the most efficient way to prepare this is to measure/chop the onion, garlic, parsley, celery, and broth, whilst the potatoes and split peas are par-cooking. Done this way, the whole recipe can be on the table in under an hour. OIL QUANTITY: The original recipe also calls for 3 tablespoons of oil.

Disclosure: I received a complimentary copy of this cookbook for my review.