As one of the world’s preeminent bell pepper lovers, I love using them in all sorts of ways. And I also happen to be pretty obsessed with samosas. So it was only a matter of time until I invented these samosa stuffed peppers, which are basically the best of both worlds! 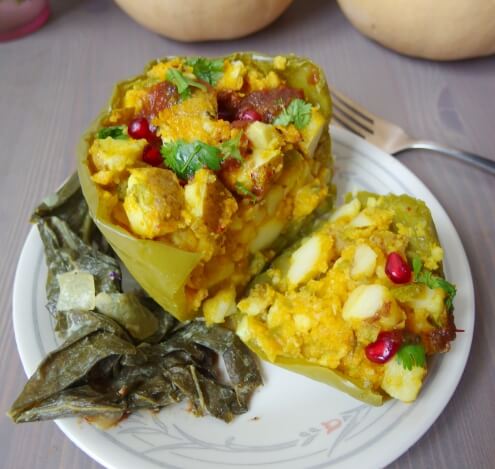 My family is Eastern European, and stuffed cabbage rolls have been a staple of our holiday celebrations for my entire sentient life. And I’ve tried not once, not twice, but three times to make a vegan version. I’ve mostly got the filling and the sauce down. But I can’t for the life of me get the cabbage as tender as my grandma does. And when you need a knife to eat a cabbage roll, it’s less than ideal.

Luckily, as far as stuffed foods go, bell peppers don’t have that same challenge. You can get them perfectly crisp-tender, and cut right through them with a fork. This recipe is like a samosa that’s wrapped in a luscious pepper instead of in fried dough! As for the butternut squash, well, it adds a velvety texture and a subtle sweetness without crowding out the flavor of the potato. I kind of have to put butternut squash in everything I make right now, because they’re starting to crowd us out of our apartment. See two of them looming ominously in the background of the pictures?

We served these samosa stuffed peppers alongside collard greens that were braised with cumin seeds, onions, and coconut milk. Nothing fancy. But the peppers can certainly stand alone, too :). As always, tweak the spices to your liking. 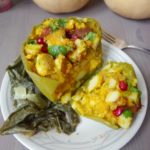 For prepping and cooking the peppers:

Looking for more recipes with samosa flavors? Try these!