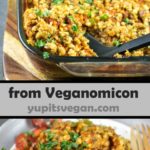 You know it and you love it: Veganomicon is one of the classic tomes of vegan cooking. This amazing cookbook by Isa Chandra Moskowitz was recently updated with new pictures, streamlined instructions and organization, and some additional recipes as well. I am delighted to be sharing one with you, this rich, satisfying, holiday-worthy Baked Farro with Tomato and Herbs. 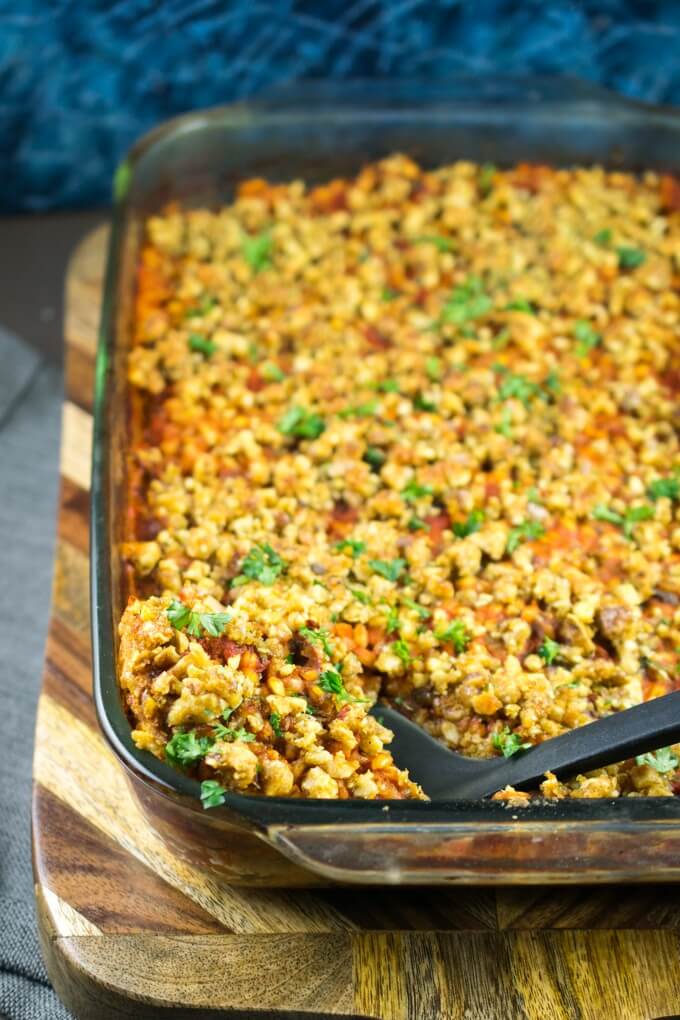 Isa’s cooking style is similar to mine in a lot of ways. She’s willing to take a couple of extra steps to make home cooking taste special. The recipes begin with real ingredients and end with creative presentations of plant-based flavors. Simply put, this is vegan food for people who just like good food.

I love farro, an ancient grain in the wheat family with a nutty flavor and chewy texture. *But*, I usually prepare it in my rice cooker and then season it afterward. The concept of baked farro was totally new to me and I can say definitively that I will be making it again. 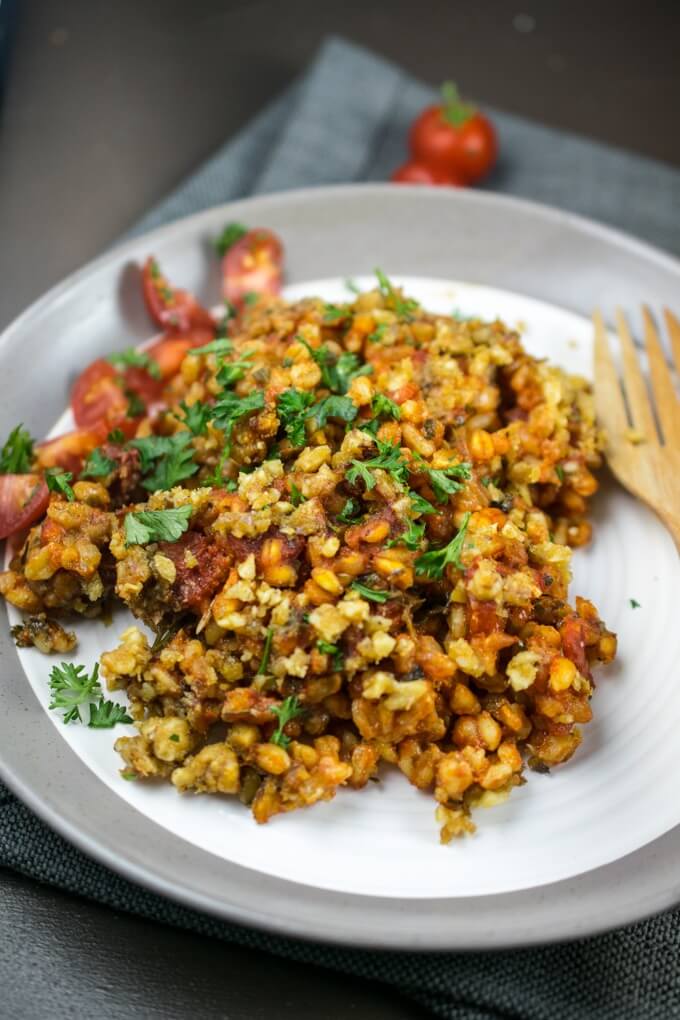 To make this baked farro with tomato and herbs, shallots and garlic are sweated in a skillet, and then infused with thyme, bay leaf and oregano. Farro is added to the pan and toasted risotto-style, but then the whole thing is transferred to the oven where it bakes with tomatoes and fresh parsley. In the oven, the farro absorbs the tomato broth and becomes perfectly al dente, brimming with herbacious savory flavor.

The piece de resistance of this casserole, though – the little extra step that made this baked farro sing – is the truly insane walnut “breadcrumbs” that are baked onto the top. Made by grinding up walnuts, nutritional yeast, salt, and lemon zest, the crumbs are buttery and homey, and get nice and crisped in the oven as a complement to the tender and chewy farro.

I used crushed instead of diced tomatoes, so mine doesn’t have those tomato pieces and has more of an orange color throughout, but other than that it looks just like the picture from the book.

This baked farro with tomato and herbs proves that cheese and eggs are wholly unnecessary for making a tasty grain bake. I actually was planning to add cooked chickpeas to mine to turn it into more of an entree; they were completely forgotten on the counter. But I still think that would be a great addition. If you’re so inclined, some veggie sausage like Field Roast would probably also pair well with the tangy tomato flavors.

The recipe is illustrative of the type of fare you’ll find in the rest of Veganomicon. The book has appetizers, sides, “proteins”, complete meals, soups, desserts, breakfasts… all creatively made with normal ingredients. If you like to cook and would like some more all-purpose vegan recipes on your cookbook shelf, I can’t recommend it more! 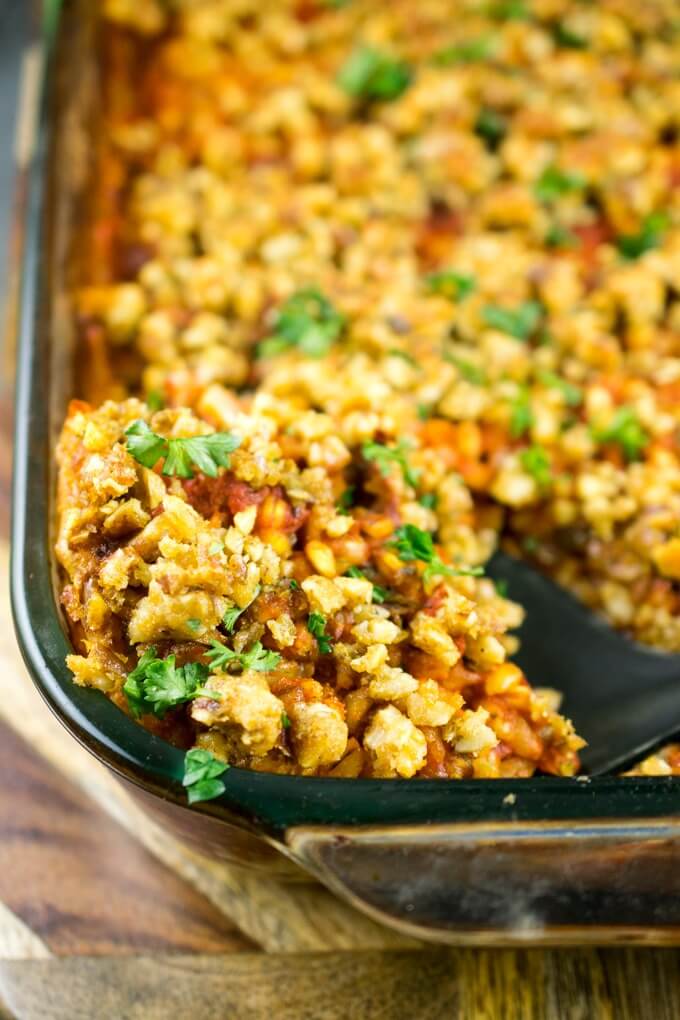 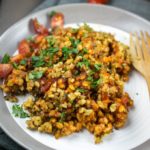 Baked Farro with Tomatoes and Herbs

This hearty vegan casserole is made by baking toasted farro, garlic and shallots in an herb-infused tomato sauce until tender. A crispy walnut breadcrumb topping makes this recipe truly gourmet.

For the walnut topping:

Author's note: Rich and cheesy tasting without a lick of cheese (and with plenty of nutritional yeast), this comforting and easy tomato and herb-drenched baked farro casserole may bump your favorite pasta bake down a notch or two. Farro is a rustic, chewy variety of whole-kernel wheat rich in protein and fiber, and usually stocked in nice groceries with other heirloom grains, such as quinoa, or look wherever Mediterranean pastas and rices are sold.

Shannon's notes: I've reduced the oil for the shallots and garlic by half with no ill effects. Also, I found it easier to pre-mix the olive oil with the walnuts rather than drizzling it on afterward. My only other change was to used crushed rather than diced tomatoes.

Disclosure: I received a complimentary copy of Veganomicon: 10th Anniversary Edition. All writing and opinions are my own.

Looking for more whole grain meals? May I suggest the following:

One Pot Curried Lentils and Quinoa