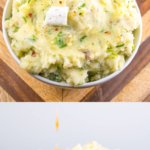 Thanksgiving may have come and gone, but there’s still plenty of winter left for mashed potato eatin’! I’ve witnessed an astonishing number of ways to complicate vegan mashed potatoes, but the truth is that this dish is super simple. You can make easy, budget-friendly, crowd-pleasing vegan mashed potatoes with basic pantry ingredients by following a couple of guidelines! 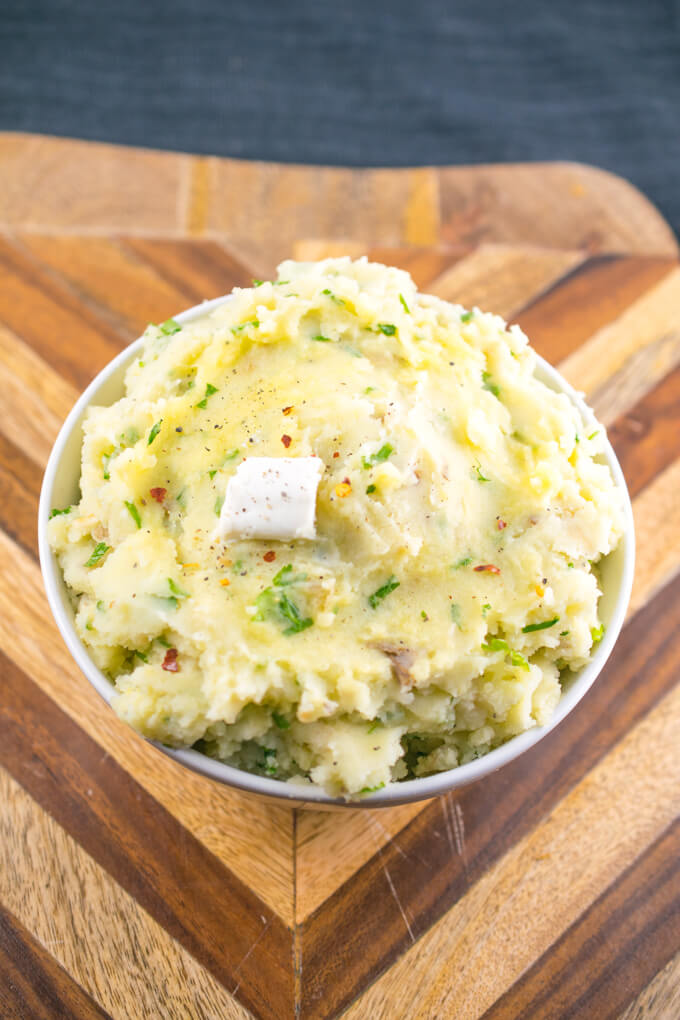 So yes, I’m late in a way, but I still think this is worth posting today. I have a vegan mashed potatoes recipe below, but honestly if you learn these basic reminders you’ll probably rarely need to consult a recipe.

Most mashed potato recipes call for butter, so it’s natural to turn straight to Earth Balance without thinking twice. But me, I don’t care for the taste nor do I care to pay $6 for a tiny little tub. I found that my vegan mashed potatoes were just as delicious when made without butter, instead with a 50-50 blend of olive oil and refined coconut oil.

If you must top your taters with a pat of dairy-free butter then the only product I recommend is Miyoko’s Cultured VeganButter. It’s the only one I ever buy, but I use it very sparingly because it’s expensive.

Nobody likes garlic breath.* Thus, you’ll want to avoid adding your garlic raw. One might think to use garlic powder, and this is OK in a pinch, but garlic powder won’t provide you with that subtle sweetness and more mellow flavor that fresh garlic does.

That leaves us with option #3: while warming your oil blend, add the minced garlic to it and cook it just until fragrant and starting to lightly brown. All of the oil will be infused with nutty garlic taste from the garlic’s oil-soluble flavor compounds; this flavor is consequently mixed into every bite of the potatoes.

*Okay, I’m sure somebody probably does, so you can skip this section.

Traditional mashed potato recipes will also call for milk, cream, or both. I used to add almond milk to my vegan mashed potatoes, and then I would get sad when there was a weird, out-of-place almond taste. Non-dairy milks are often fortified with natural or artificial flavors that are designed to taste good in cereal, essentially. I seem to be sensitive to these and that’s part of why I generally stick to only soy milk in my savory cooking.

What about coconut milk? It has the most amazing creamy texture – but the coconut flavor doesn’t pair well with Thanksgiving flavors like lentil loaf to me.

Another option is cashew cream. I use it in my oil-free vegan roasted garlic mashed potatoes. However, getting out the blender to make cashew cream isn’t always at the top of my list of fun things, so I wanted to offer a version that doesn’t require cashew cream either. 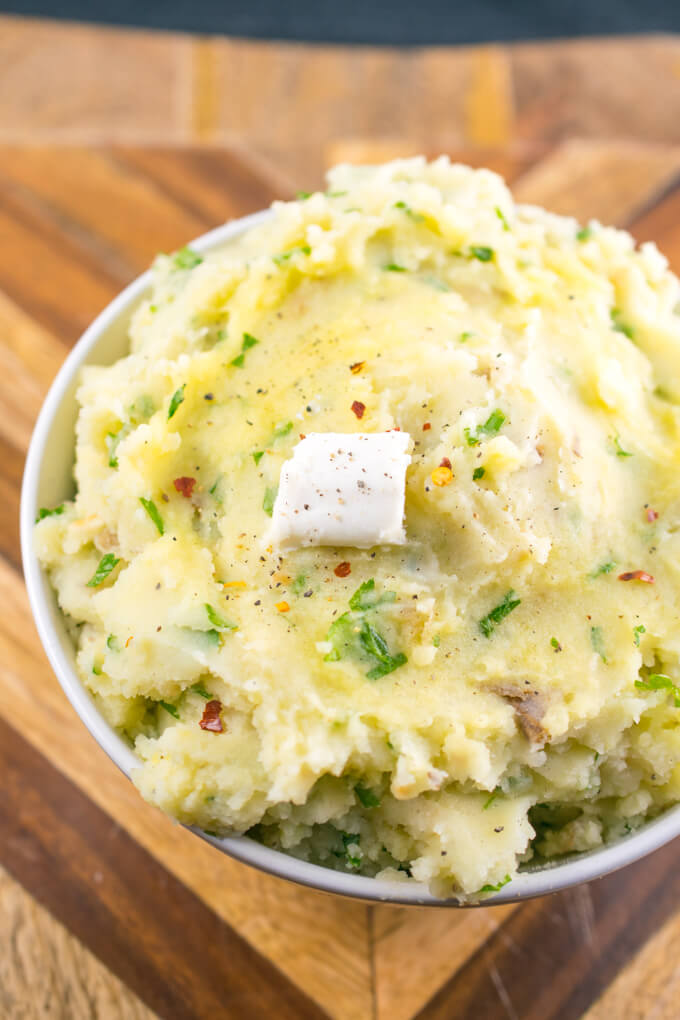 After a lot of research and experimentation, I learned that the best non-dairy milk substitute in mashed potatoes is an ingredient that we’ve gotten for free all along: the potato cooking water. Using reserved cooking water allows your vegan mashed potatoes to be thinned to your desired texture, adding back in starch and making them nice and fluffy in the process – without diluting the flavor or introducing a competing one.

I kind of love that these vegan mashed potatoes don’t require any seasoning other than plain old garlic! No need for nutritional yeast, vegetable broth, processed vegan cream cheese, or any other funky stuff. Just amazing creamy delicious potato flavor!

Type of potato to use

You’ll want to avoid waxy potatoes like red bliss. Stick to the starchiest potatoes you can stand. You can also use Yukon gold potatoes, which are a step below Russet in starch level. They do have a more pleasant, light yellow color than the grayish/brownish Russet, but their texture is also a little bit inferior in vegan mashed potatoes. It’s not quite as creamy, and may be a little more lumpy (of course, that’s moot if you have a ricer, but I don’t ;)). 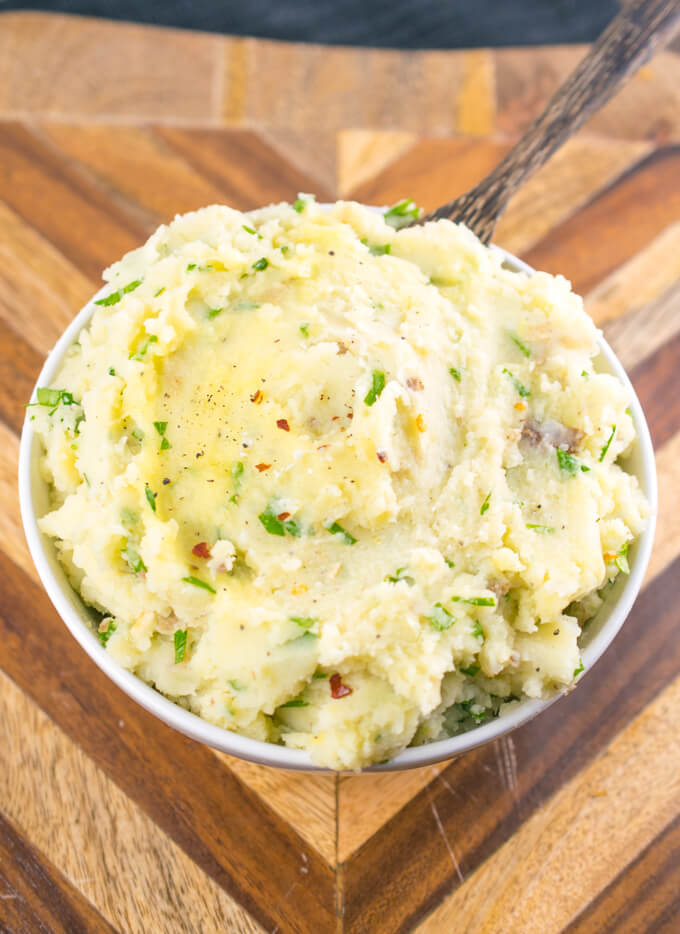 However, because of their starchiness, Russets are a little more dry, and require more careful seasoning and moisture management. I prefer to an approximately half-and-half blend of these two kinds. Just avoid the waxy kind and you should be good to go!

Other methods to make your vegan mashed potatoes a success

Always mix in your oil before adding liquid (in our case, the reserved cooking water). The fats from the oils will coat the starch in your mashed potatoes and give them a buttery mouthfeel. The oily coating then protects the potatoes from getting turned to glue when the liquid is adding.

Salt the *** out of your water

I’ve said it before and I’ll say it again: your cooking water needs to have a horrifying amount of salt in it or the end result is going to taste disappointingly bland.

To peel or not to peel?

I prefer to peel my potatoes AFTER cooking. I find that this keeps the interiors more tender and starchy, as well as being easier to peel. I don’t find it to make a huge difference, though, so I say do whichever you prefer!

Of course, now that you’ve made vegan mashed potatoes you’re going to want to serve them with an amazing gravy. May I introduce you to my secret ingredient, flourless vegan gravy that will knock your socks off? 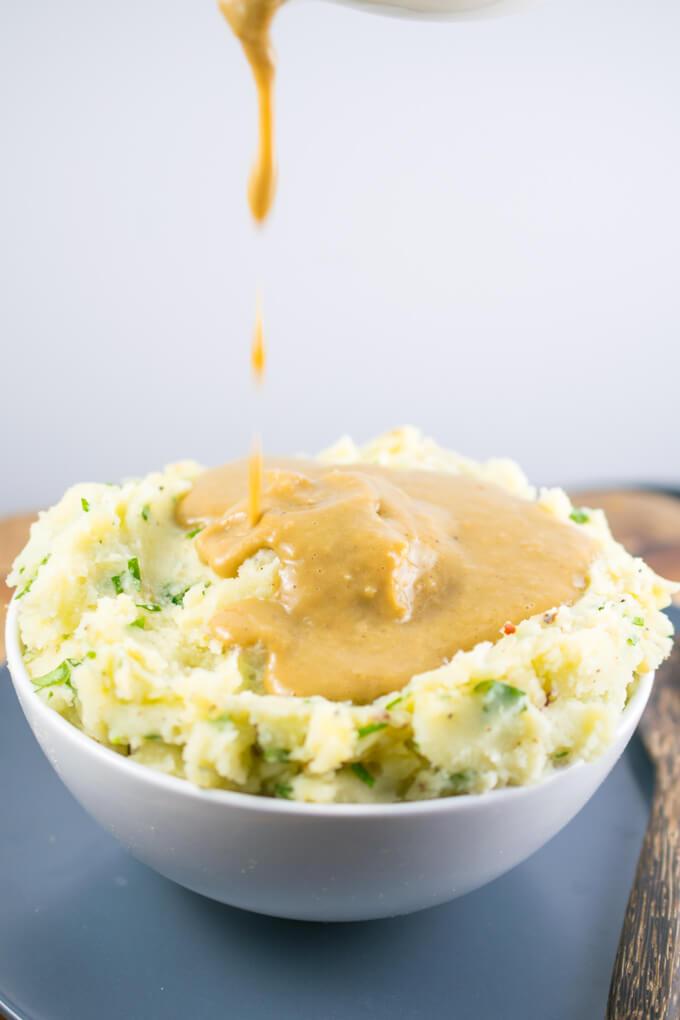 Sure, I could easily eat a whole bowl of these by themselves but why stop there? A few slices of walnut lentil loaf and you’ll be in a proper Thanksgiving-style food coma, albeit in a much more healthier and nutritious way!

I’d be surprised if you have any vegan mashed potatoes left over, but if for some reason that happens, put them to use in my easy vegan potato bread.

POTATO TYPE AND PREP: I most highly recommend a blend of 1 lb. Yukon gold potatoes and 1 lb. of Russets. However, you can use either, or another type of potato if you prefer. Just don't use a waxy potato like red bliss. When cutting your potatoes up to boil them, cut them into pretty big pieces. When using a mix of Russets, which are larger, and Yukons which are smaller, I often quarter the Russets and halve the Yukons so that all pieces are a similar size.