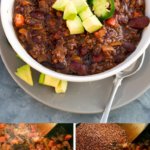 This smoky quinoa chili is full of flavor, packed with nutrition, and cooks in one pot for easy cleanup! 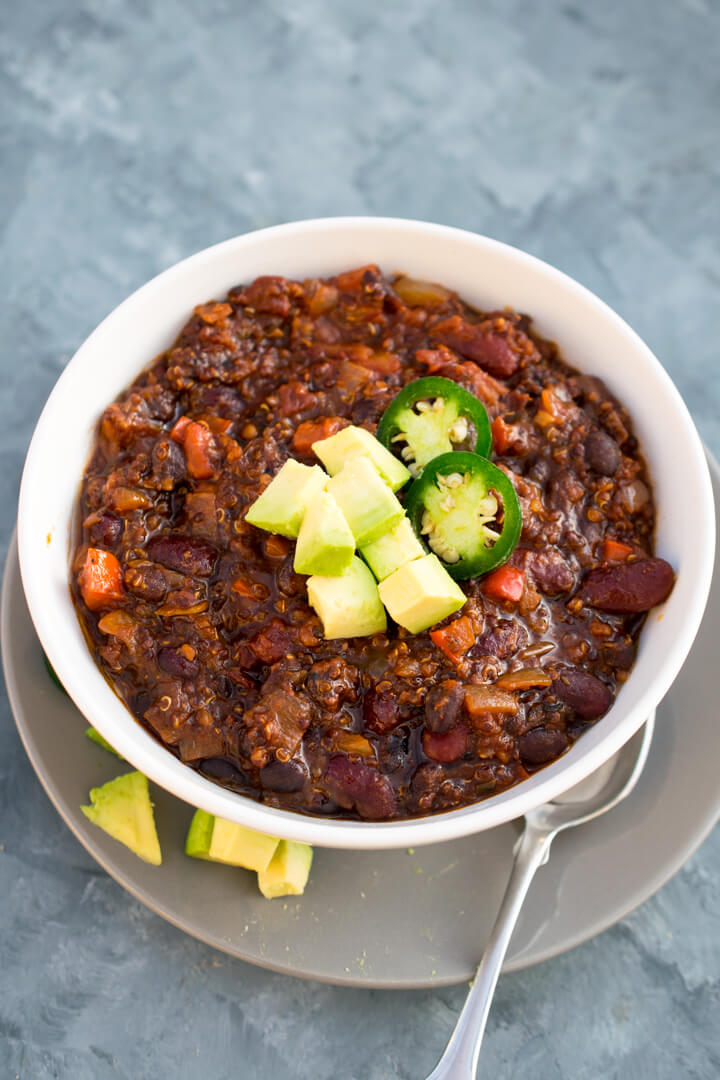 Y’all know that I have you covered if you want to put the effort in to make real deal vegan chili. It can’t be beat!

But sometimes you (and I) just don’t want to dirty the extra dishes and pans, and that’s where this One Pot Smoky Quinoa Chili comes in. Despite eliminating a lot of the extra steps that my traditional chili requires, I’ve kept this recipe flavorful, and upped the nutrition by adding quinoa! 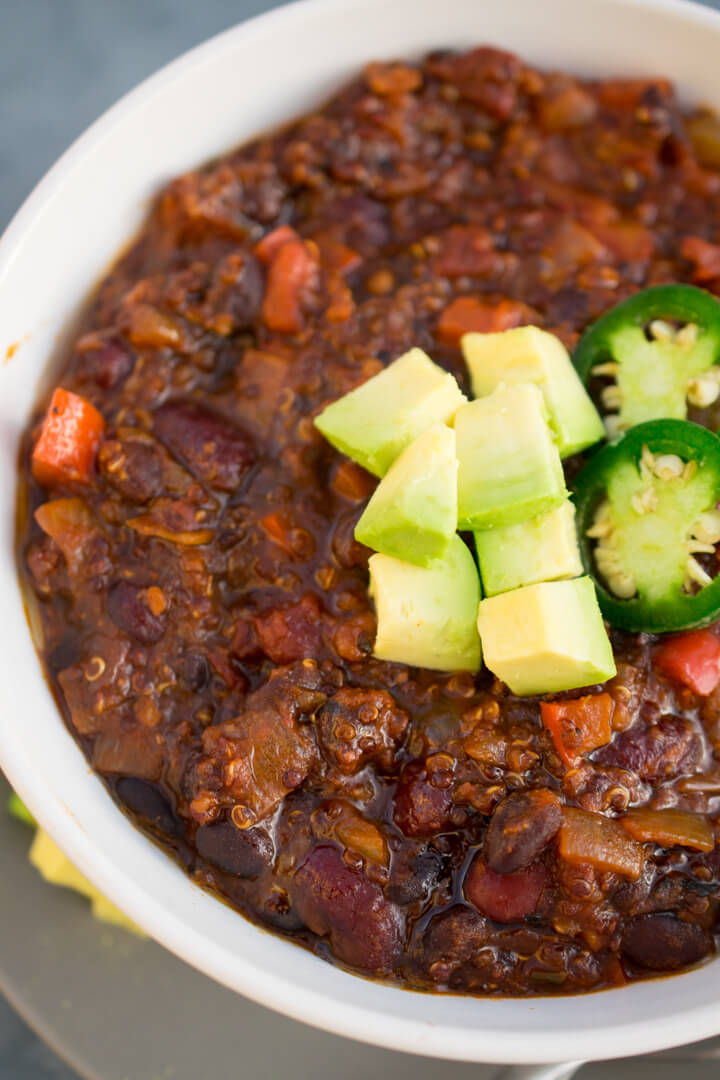 While I’m not going to try to convince anyone that quinoa resembles ground meat, I think it’s important for chili to have a granular textural element to give it body. It’s what differentiates chili from being just a peppery soup. In my go-to chili, I use textured vegetable protein for this purpose, but quinoa does the trick, soaks up the chili flavor beautifully, and is a less processed alternative to TVP.

Although we aren’t toasting any whole chiles here, I’m still being a stickler about chili powder (which, as labeled in the US, is just a mix of other spices). Instead of a pre-made spice blend, this recipe calls for copious quantities of both regular and smoked paprika, as well as cumin and oregano. I’ve also added a bell pepper, a jalapeno, and chipotle peppers in adobo sauce to add plenty of peppery flavor throughout the dish. 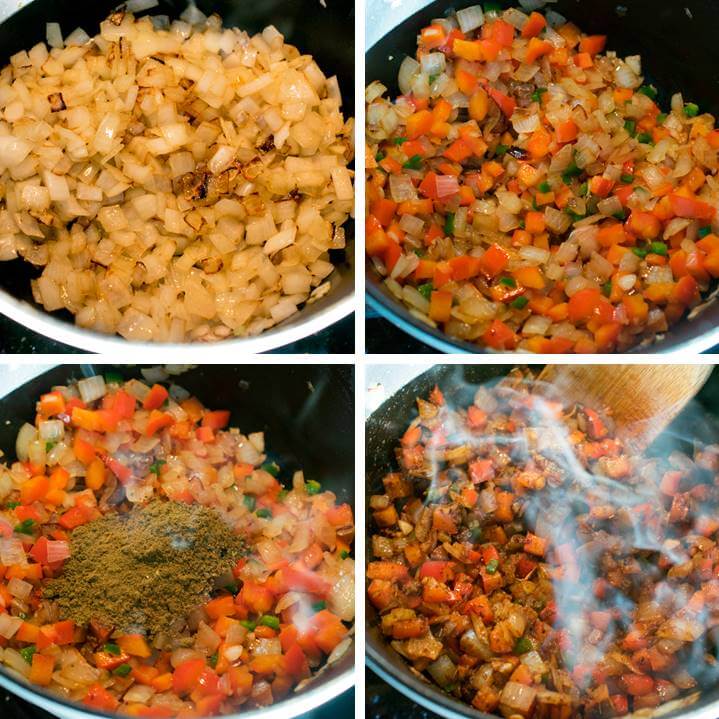 One of the keys to getting deep flavor is to bloom your spices in oil before adding liquid. This allows their flavor to roast, develop, and disperse evenly into every bite of the chili.

I also like to toast the quinoa with the aromatics a little bit before adding the liquid ingredients, so that it gets more nutty and robust in taste. 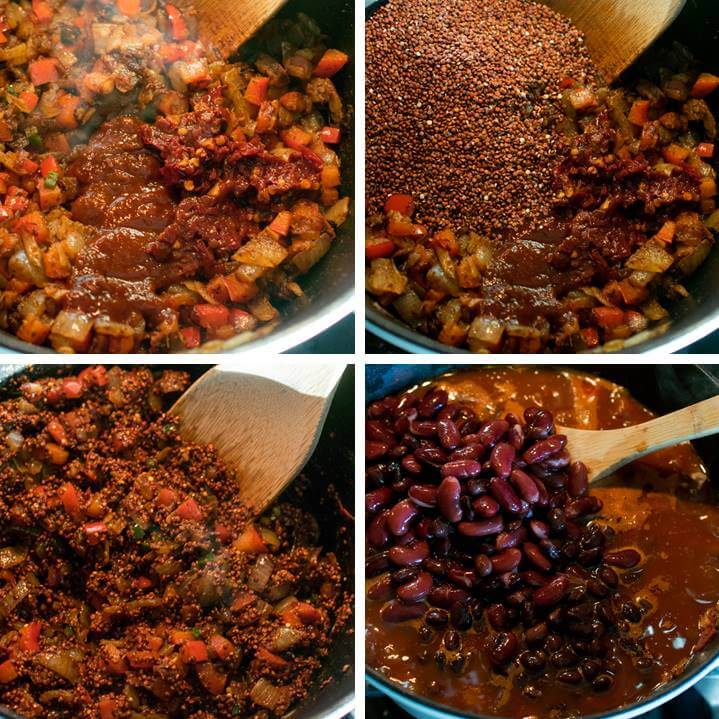 Elsewhere this quinoa chili gets its flavor from onion, garlic, fire-roasted tomatoes, soy sauce, and a splash of beer if you’re into that. However, if you skip the beer then in addition to being vegan this dish is naturally gluten-free, and protein-rich thanks to the quinoa and beans! 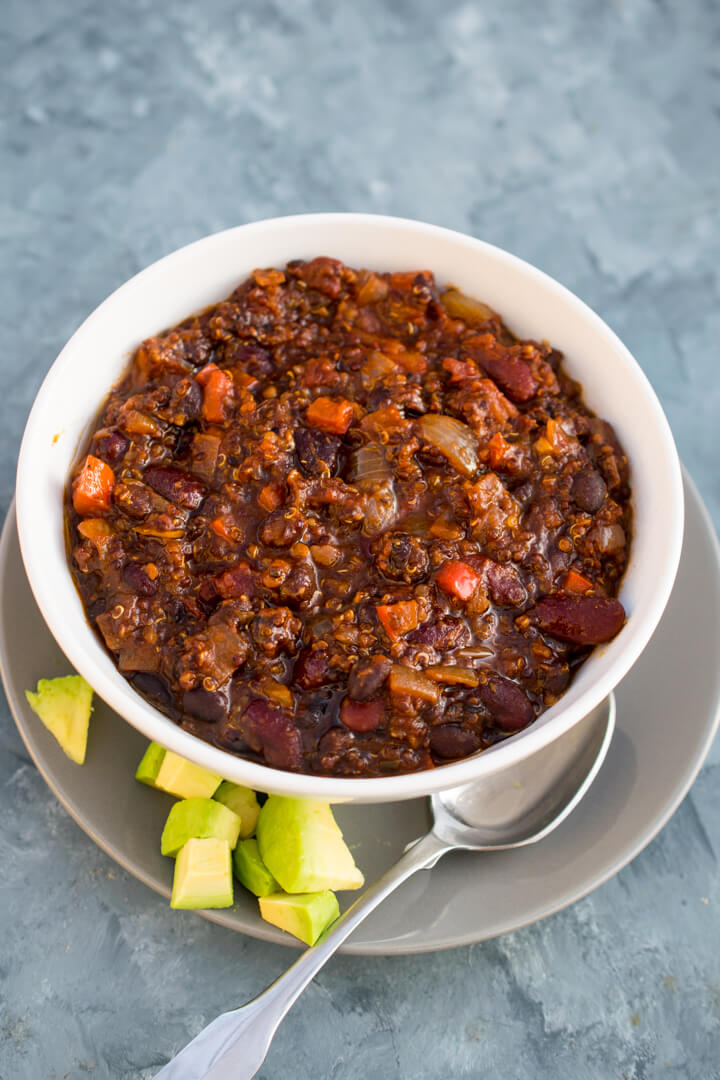 If you enjoy this quinoa chili then you should also check out my One Pot Tandoori Quinoa and my One Pot Moroccan Quinoa with Red Lentils. Both of them are tangy, boldly flavored one pot meals. For another quinoa dish that’s a little bit more creamy and rich, try some One Pot Curried Quinoa, by way of Gena Hamshaw’s fabulous cookbook, Power Plates.

If you make this black bean quinoa chili recipe, let me know in the comments or by tagging me on Instagram. Bon Appetit! 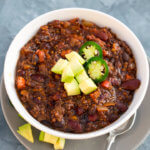 CHIPOTLE PEPPERS IN ADOBO SAUCE: This is a shelf-stable product that comes in a can. It can be found in the Latin or International foods section of the grocery store. For this recipe, just retrieve two peppers from the can and chop them very small. Then scoop out an additional 2 tbsp of the sauce. MARMITE: This is also a shelf-stable product and it's available in the British or International foods section. It's kind of a freaky, super concentrated umami bomb and I basically only use it for chili, hence why it's optional. BEER: I highly don't approve of using a fancy craft beer for this quinoa chili. It will be too bitter and overpowering. Use something super light like Natty Boh if you're in Baltimore, or Miller Lite, etc.

Adapted from my Vegan Chili.