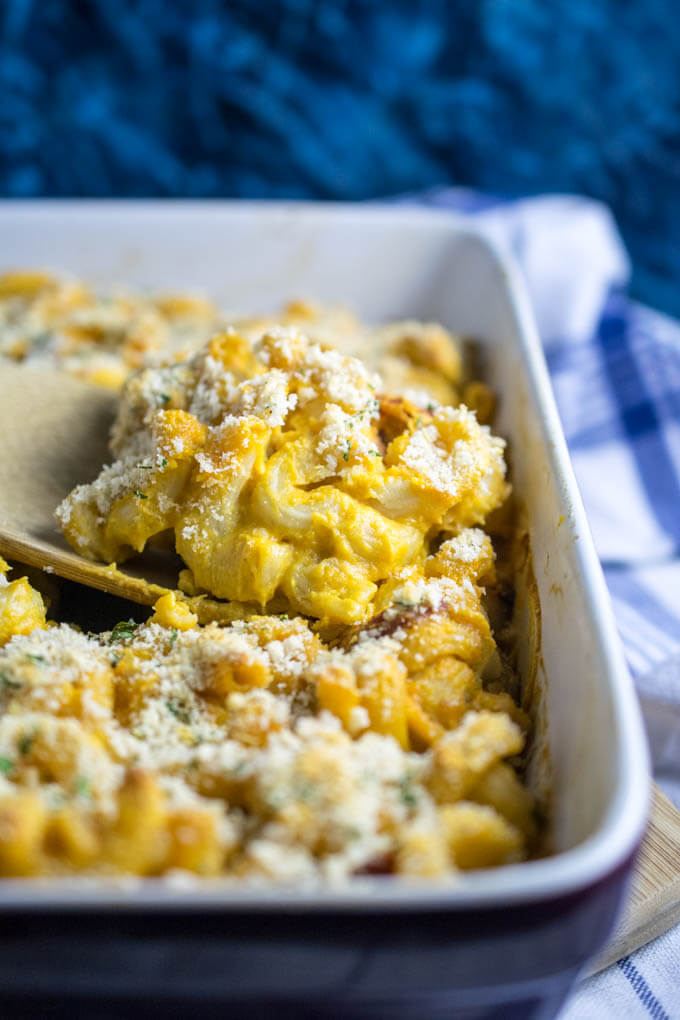 Vegan cheese analogs. A highly contentious topic on the internet and a food that gets seriously mixed reactions from taste testers. I’ve come up with a version of baked mac and cheese that I think is really lovely, so I’m throwing my hat into the ring. I think you’ll be surprised by how much you like this vegan version, which is delicious in its own right and made with some unexpected nutritious ingredients! Sorry for the picture overload today. I went a little overboard photographing this cheezy goodness! 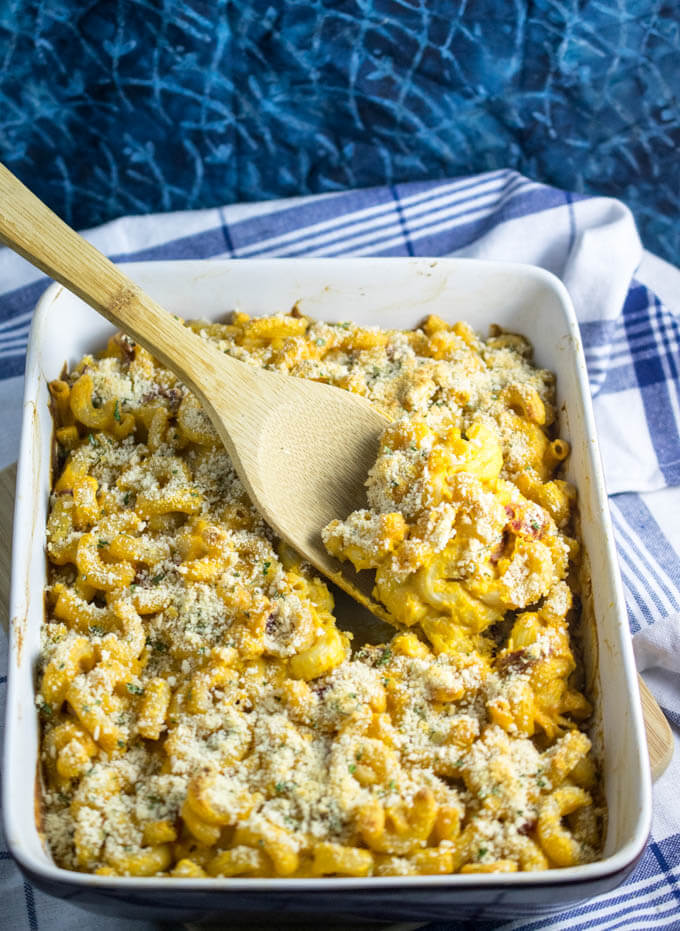 I’ve said it here many times before, but I’m so picky about cheese substitutes. I really can’t stand the store-bought shreds, despite having gamely tried all of the brands I could find. I actually still think my homemade cashew cream cheese tastes better than anything I’ve bought at the store.

Basically, I’m hard to please when it comes to cheeze. If it’s going to be mimicked directly, it needs to be super convincing with no aftertaste, strange texture or try-hard amount of nutritional yeast. On the other hand, I’m just as happy if not happier with something that’s creamy, gooey, savory, a little funky, without being explicitly cheesy. Something that, like with my vegan meatballs, has the same good qualities of cheese that I used to enjoy but without tasting exactly like it. 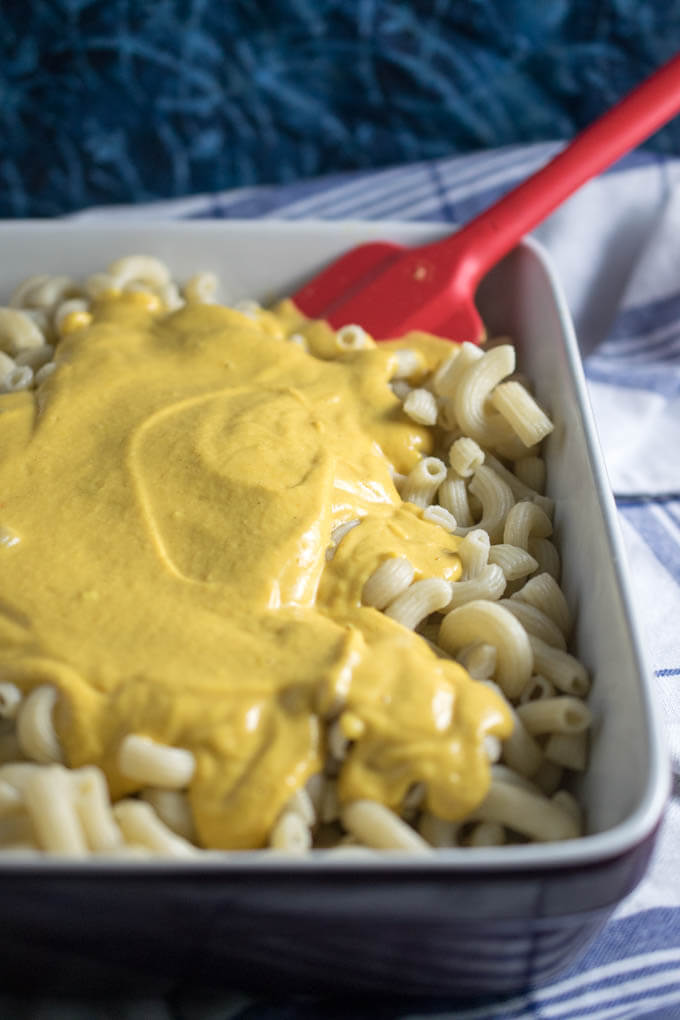 This vegan baked mac and cheese is more of the latter. Sure, there are some very cheese-like characteristics to this but of course, the flavor isn’t identical. However, that doesn’t mean it’s lacking. Here are a few of the things that I think make my vegan mac and cheese recipe special:

You’ll often see vegan mac and cheese recipes that call for boiling carrot along with the potatoes. It’s generally there for the purpose of color, as far as I can tell. I’ve made those recipes. I found the carrot flavor a little aggressive (which is also how I feel about coconut milk in this application), so next I tried sweet potato; that was tasty, but too sweet. Roasted red pepper is the solution I’ve come up with. I think both the flavor and color it brings to the table are spot on. 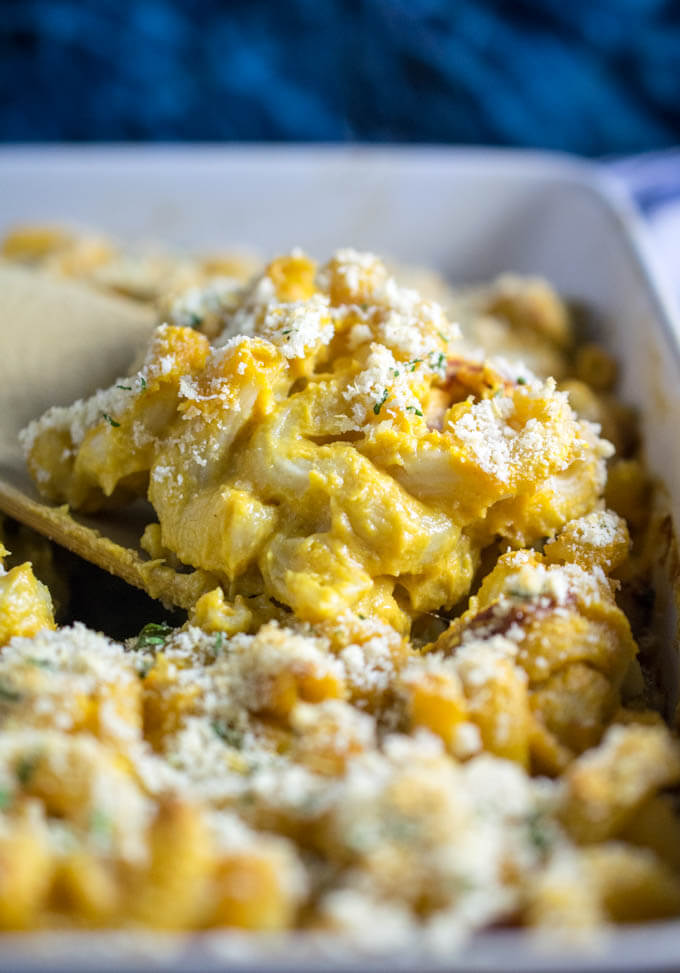 Back when I was a pre-teen who basically lived for congealed deli counter mac and cheese, if you’d had tried to get me to try a vegan baked mac and cheese made from vegetables, I probably would have been horrified, and definitely would have been confused. But look at me now. I LOVE this delicious vegan pasta bake and it ticks all of the boxes that mac and cheese used to tick for me, while also being made with a number of nutritious ingredients! 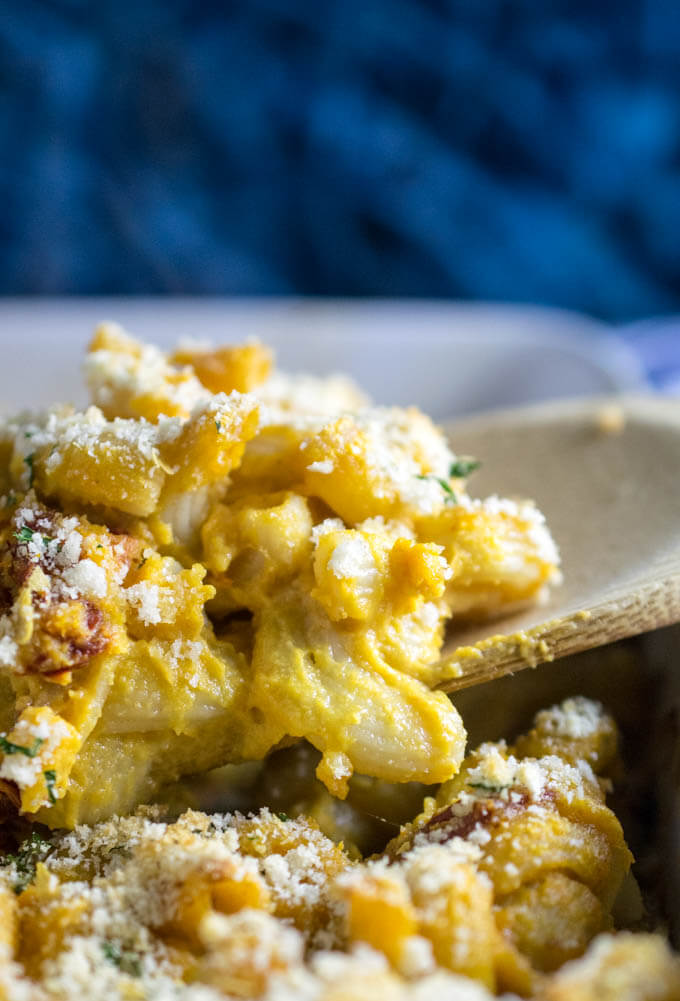 Even more importantly, I happened to notice the leftovers slowly disappearing from my fridge when a certain someone-who-will-not-be-named-but-isn’t-vegan would leave for work in the morning. I’m considering that an endorsement 🙂

If you make this vegan baked mac and cheese, let me know how you like it! Check out my notes on the recipe for how to most successfully make the mac and cheese gluten-free, or make it ahead of time/for leftovers. Cheers! 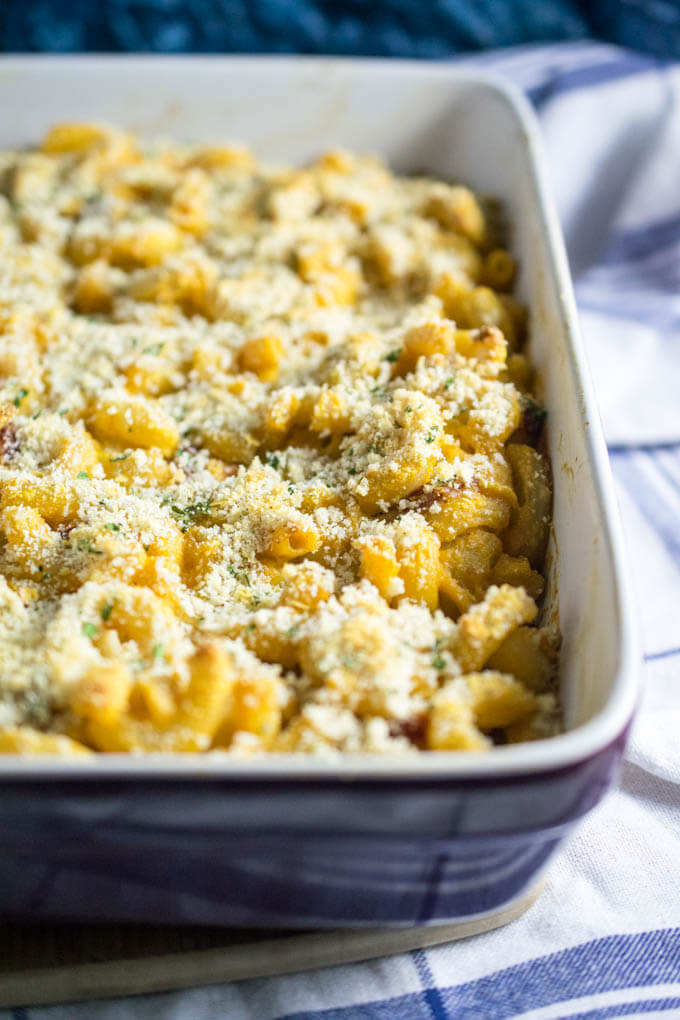 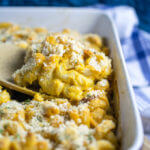 For the vegan mac and cheese sauce:

For the vegan baked mac and cheese:

For the breadcrumb topping:

For the vegan mac and cheese sauce:

For the vegan baked mac and cheese:

You can also use a jarred roasted red pepper if desired. GLUTEN-FREE: Simply use gluten-free pasta and gluten-free breadcrumbs, or even omit the breadcrumbs altogether. I recommend a pasta that can hold up well to a long cooking time, like brown rice pasta, which I tested this recipe with. It was great! SOY-FREE: There are several delicious soy-free miso options on the market these days. I keep chickpea miso stocked in my fridge, but I've seen other choices at my local Whole Foods. Is this isn't an option for you, then omit the miso and increase the nutritional yeast a little bit - it's really fantastic with miso, though, and fermented soy is easy to digest! OIL-FREE: Skip the olive oil in the sauce, for greasing the garlic and the pan, and tossing with the pasta. I tested this recipe both ways, and the texture is better if you use olive oil, but it doesn't make a huge difference. MAKE AHEAD: The vegan mac and cheese sauce is best when blended fresh using potatoes that are still warm, but you can make it ahead if needed. Heat it back up on the stovetop with a splash of vegetable broth to loosen it back up. Either way the red pepper and garlic can be roasted in advance. LEFTOVERS: This is best eaten fresh - the pasta tends to start to absorb the sauce as leftovers sit. However, we still enjoyed the leftovers from the refrigerator happily. I recommend adding a little water or vegetable broth and a dash of olive oil to liven them up again. I don't recommend freezing this dish. NUTRITION: Nutrition facts include the breadcrumb topping and exclude the optional oil.

It’s really difficult to cite sources for the potato/cashew cheese sauce as it’s all over the internet at this point, and I spent quite a lot of time tweaking my own recipe from the ground up. However, to link to at least a couple of points of inspiration, I checked out this vegan roasted red pepper mac and cheese by Isa Chandra (formerly The PPK); and this vegan cheese sauce by Veggie On A Penny.

This works awesome as a baked mac but if you’re looking for a classic vegan mac and cheese made on the stovetop, I’ve got you covered on that too!