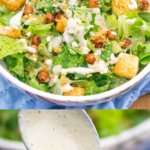 Getting me to eat a meal that consists of mostly raw leaves is an achievement. Nope, despite being vegan, a lover of vegetables, and reasonably health-minded, I’m just not a salad gal. So, you’d better believe that this vegan caesar salad is good.

Crisp fresh romaine (which I think we’re allowed to eat again), garlicky croutons, blackened chickpeas, and the most amazing vegan caesar dressing. Yep, this is a salad I could eat pretty much every day. 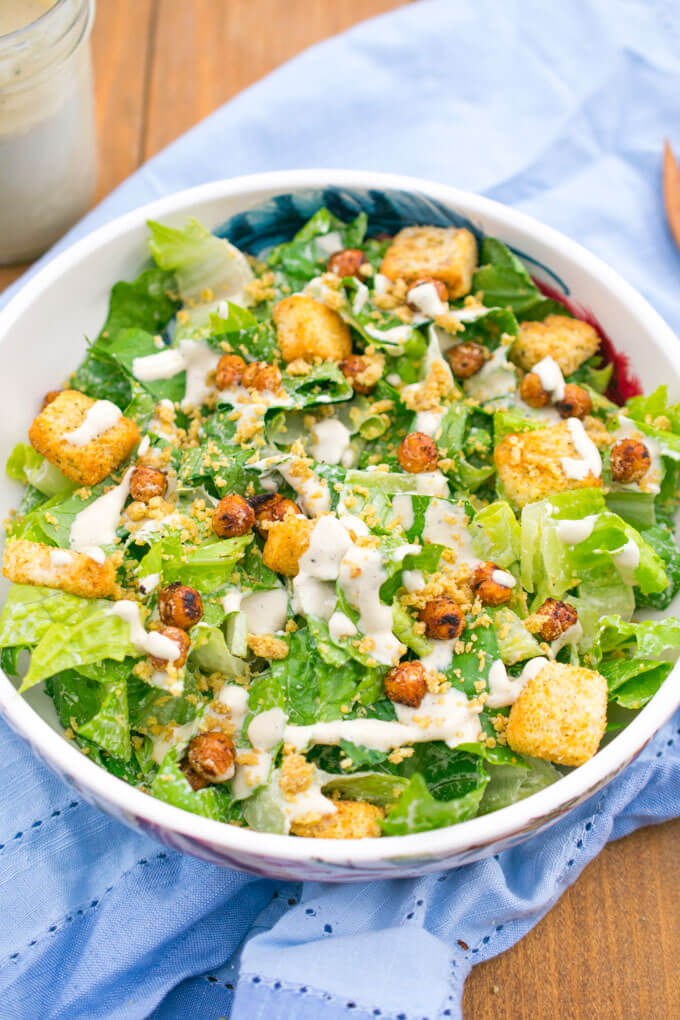 On a side note, I don’t usually go AWOL for 10 days on this blog, but after publishing my now-of-much-public-interest vegan white cake recipe, I had to go into hiding. Just kidding 😂 my PC’s hard drive started to fail right after that. I took apart the computer to replace the hard drive, one thing led to another, and I have now learned how to build an entire computer from scratch.

Although I was not able to publish recipes due to those circumstances, I’m thankful I had this vegan caesar salad to help power me through.

I’ve been going a little crazy with blackened chickpeas on everything lately, but I had to put them on this one! A healthy vegan blackened chicken caesar recipe is long overdue on its arrival into this world. Between the crispy-chewy spicy chickpeas, the crunchy croutons, and the lettuce, there are so many wonderful textures going on in this salad.

And if you thought I’d use the chickpeas to replace the croutons completely, then you must not realize that a caesar salad without croutons is like a sky without stars. 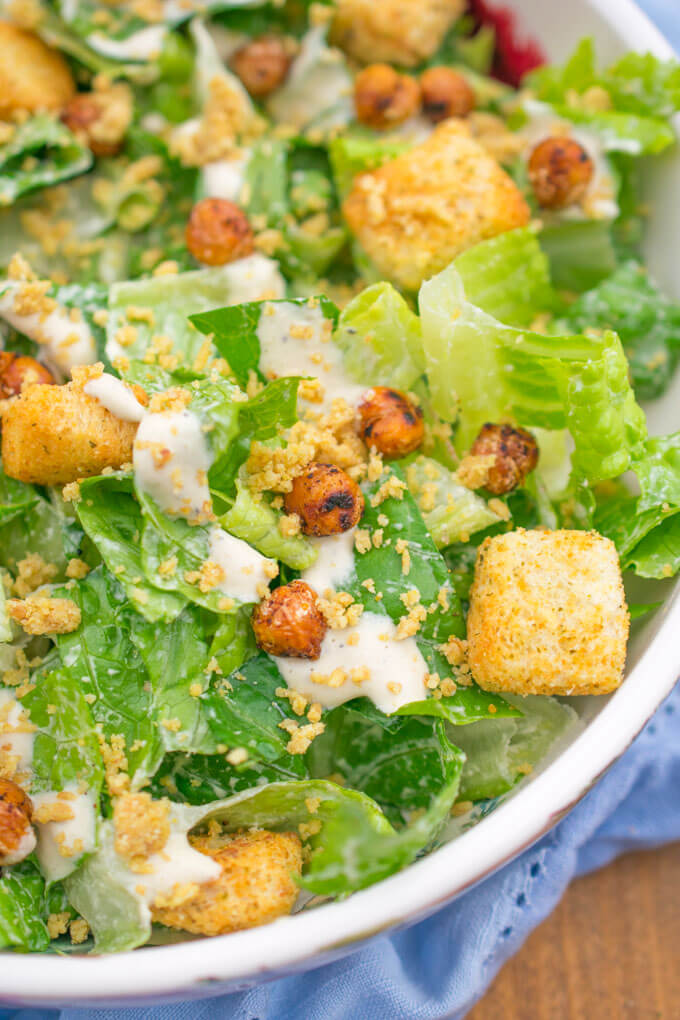 This is a cashew-based vegan ceasar dressing that gets its flavor from mustard, capers, and soy sauce. Soy sauce?! Yeah, you heard me right. I did some reading on traditional caesar salad. Apparently the sister of the guy who created it stated that the original version didn’t contain explicit anchovies, but it did have traces of them via the Worcestershire sauce.

I can’t seem to be bothered to procure vegan Worcestershire sauce, so to get a similar punch of savory flavor I turned to soy sauce, something I always have in my pantry. If you need this recipe to be soy-free, you can just omit it. 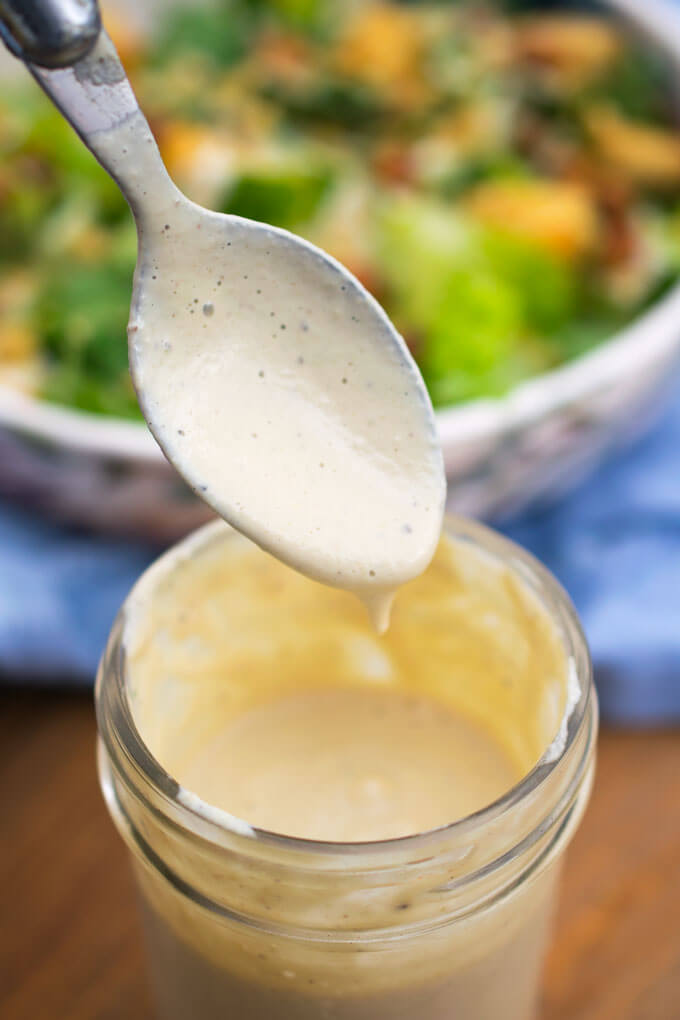 Thanks to the creaminess of the cashews there’s no need for eggs (of course), tofu or vegan mayo to get this vegan ceasar sorted, but a little bit of olive oil does improve both the flavor and the mouthfeel. Many brands of croutons are vegan. You can skip them entirely to make this whole thing gluten-free.

I topped my salad with some walnut parm, which was just my hemp parmesan recipe with walnuts substituted. We eat a whole lot of both the hemp and walnut versions since they’re delicious, made from whole foods, and packed with omega-3’s.

In conclusion, maybe posting a vegan salad recipe in winter is weird, but who cares?! Every season is vegan ceasar salad season. 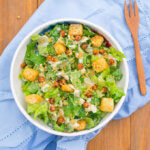 For the vegan caesar dressing:

For the vegan caesar salad:

For the vegan caesar dressing:

For the vegan caesar salad:

NUTRITION: Nutrition facts assume all of the dressing is used (probably not realistic) and omit croutons and vegan parmesan, but do include the chickpeas. LOWER FAT VERSION: (Tested!) Reduce the cashews to 1/3 cup, reduce the olive oil to 1 tbsp, and add 3 tbsp aquafaba (cooking liquid from chickpeas). If you're making the blackened chickpeas using canned beans, you can use the liquid from that same can. GLUTEN-FREE/GRAIN-FREE: Skip the croutons entirely or replace them with a gluten-free version, or tortilla chip crumbles (whaaaat...?? Yeah, I went there).

Dressing adapted from Oh She Glows.