During CSA season it is common for us to make a weeknight dinner out of a roasted spaghetti squash, some canned pasta sauce, and a handful of arugula on top. This weekend I was craving that meal, but I wanted something a little heartier, so I put together this pizza stuffed spaghetti squash. 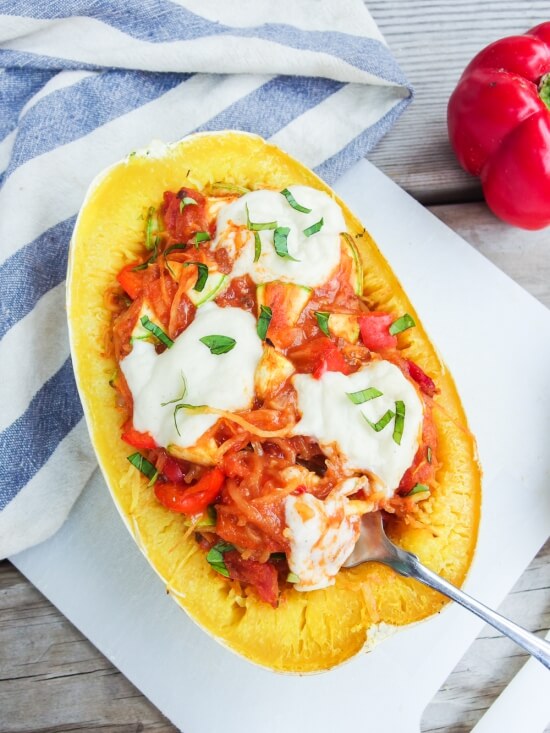 We were at the farmers’ market on Saturday picking up our CSA share, and as I walked past another farmer’s stall, I noticed he was selling something advertised as ‘Mediterranean zucchini’. It was more squat than ordinary zucchini, and light green in color. His sign said “buttery – melts in your mouth”. Well, sign me up! The CSA share is usually pretty huge so it’s not too common for me to pick up extras. But I was a) really excited to see zucchini in October; and b) couldn’t resist that description!

After cooking the zucchini (and putting it in this pizza stuffed spaghetti squash), I have to say – it wasn’t just an advertising ploy. This stuff is really good. But a Google search for Mediterranean zucchini yields very little. It looks a lot like the zucchini on this page, which doesn’t really seem to have a name. Anyway, if you’re at the market and see zucchini that looks like that, I highly recommend it. It’s very tender, sweet and mild. Ah, I love zucchini. =] (Edit: Thanks to a reader I now know that this is known as Mexican gray squash, or Lebanese squash.) 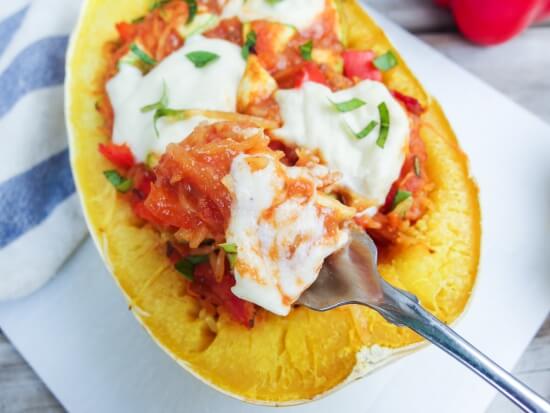 Look at that cheezy goodness!

In addition to the ‘Mediterranean zucchini’, I added some juicy roasted red pepper strips and fresh sweet onions to the stuffing mixture. Since spaghetti squash is inherently sweet as well, I recommend a spicy pasta sauce like arrabbiata to balance out this dish.

To finish things off, I made my favorite cashew mozzarella, with a little bit of extra seasoning added. It is very mild in taste, but has an amazingly cheese-like gooey texture. My partner, who eats dairy cheese all the time, loves this cashew mozzarella, in case that means anything to you! It works really well in dishes like this where other ingredients are a major source of flavor. It adds healthy fats to this pizza stuffed spaghetti squash, which helps you to absorb the nutrients from all of the veggies.

I topped off the squash with dollops of “mozzarella” like you would on an actual pizza, and I also folded some of the “mozzarella” into the stuffing mixture. This is lip-smacking good. We used a huge (biggest I have ever seen) spaghetti squash and could barely finish 1/2 of it between the two of us. So scale the amount of veggies and pasta to the size of your squash. And of course, change up the “toppings” according to what’s available and seasonal for you. 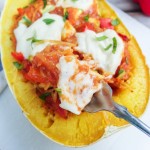 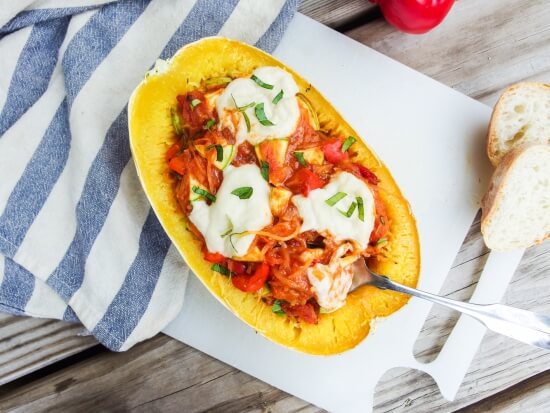