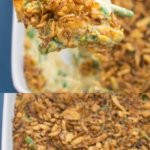 This vegan green bean casserole is rich, creamy, delectably dairy-free, and topped with a tempting layer of crispy onions. It’s easy to prep in advance, so make it a part of your holiday table! 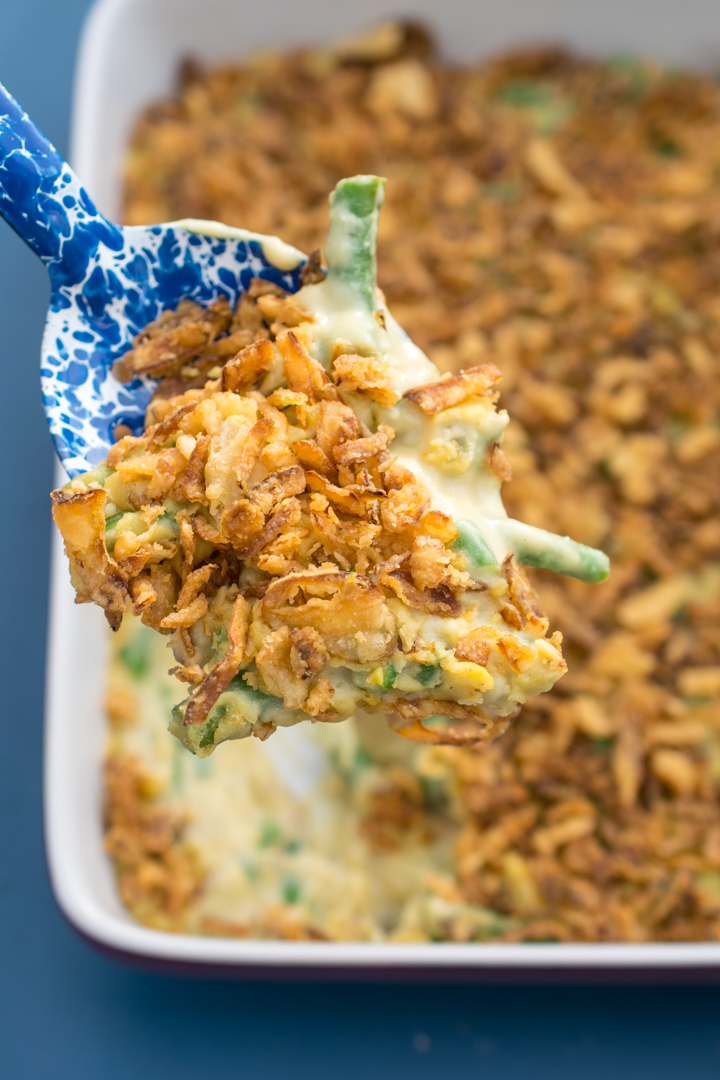 This vegan green bean casserole turned out pretty much perfect on the first try when I had the initial idea. Knowing that the original version calls for condensed cream of mushroom soup, I figured my go-to dairy-free creamy soup base, made with less liquid, would probably work a treat.

I use this “cream” base in my vegan wild rice soup, vegan creamy broccoli soup, and vegan broccoli cheddar soup. There’s a version of it in my Old Bay clamless vegan chowder as well.

The base is made from cooked potato, white beans, and raw cashews. Be sure to use raw cashews and not roasted. (P.S. raw cashews are not truly *raw*, they are actually steamed. They have a starchier texture and milder flavor than roasted cashews do.)

The cooked potato, when blended, creates a gooey texture, while the beans add some heft to this dish and the cashews add richness. Together this trio makes a delectable dairy-free cream base.

In my humble opinion, while it requires an extra step in the blender, my cream base is well worth using! It’s naturally gluten-free since it’s not thickened with a roux; and there’s no weird flavor introduced from coconut milk that some recipes use.

It was never my main goal, but these ingredients make for a fairly nutritious dish as well! I’ve been eating the leftovers as a main dish whilst testing out the recipe.

I cannot stand mushrooms, so I’ve barely ever tried the original green bean casserole and refused to use ‘shrooms here, instead relying on other flavors. Feel free to add them if that’s your thing, though… throw them in before the shallot to brown them off and draw out the liquid. 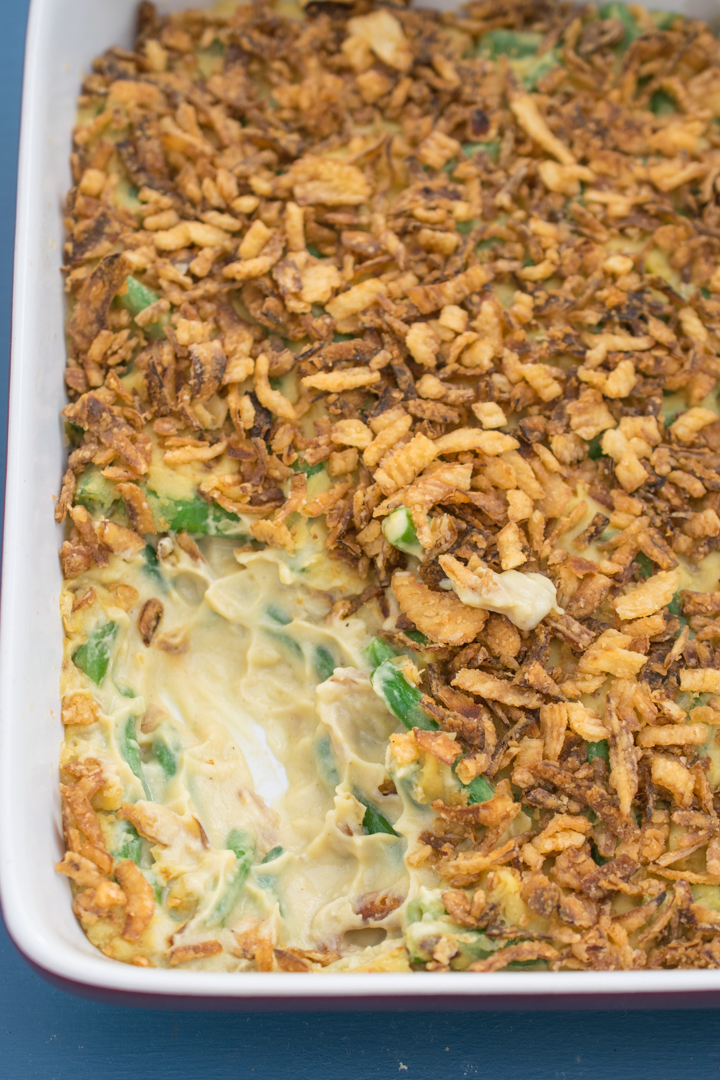 I use shallot instead of onion in many of my holiday recipes. It has a more delicate, sweet, restaurant-quality flavor and is worth the splurge in these traditional comfort food dishes! As another way to add flavor I deglaze the pan with a ladle of white wine. Finally, to bring the umami that we lost from the mushrooms, I rely on miso paste in this recipe as well as a couple of tablespoons of nutritional yeast. I tried out the recipe once without the nutritional yeast, and that was fine as well, if you’d like to avoid picking up that specialty ingredient!

This vegan green bean casserole was sampled by my roommate and my better half, who are both not vegan. The former liked it enough to post pictures on social media, and the latter said the following verbatim: “this tastes really good considering you have no idea what you’re trying to make”.

This recipe is made with fresh green beans. I figured we’re already messing with the original a whole lot, so we might as well cook the vegetables properly instead of serving up a plate of mush. You’ll lightly stir-fry the green beans in a skillet with some shallot and garlic until they’re bright green, then throw them in a casserole dish with the blended cream base. 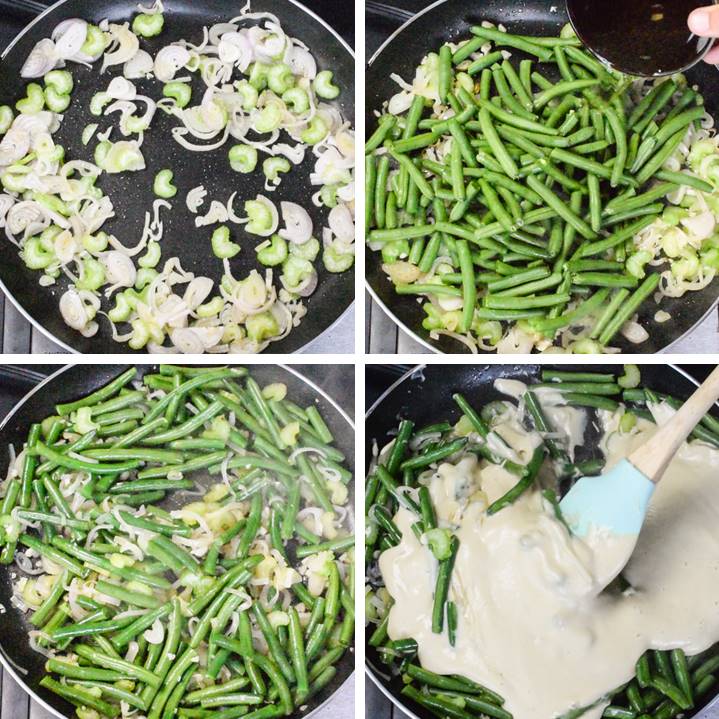 (If you for some reason require that your green beans be absolutely hammered, just cook them in the skillet longer until you get what you want).

Tips to make your vegan green bean casserole a success 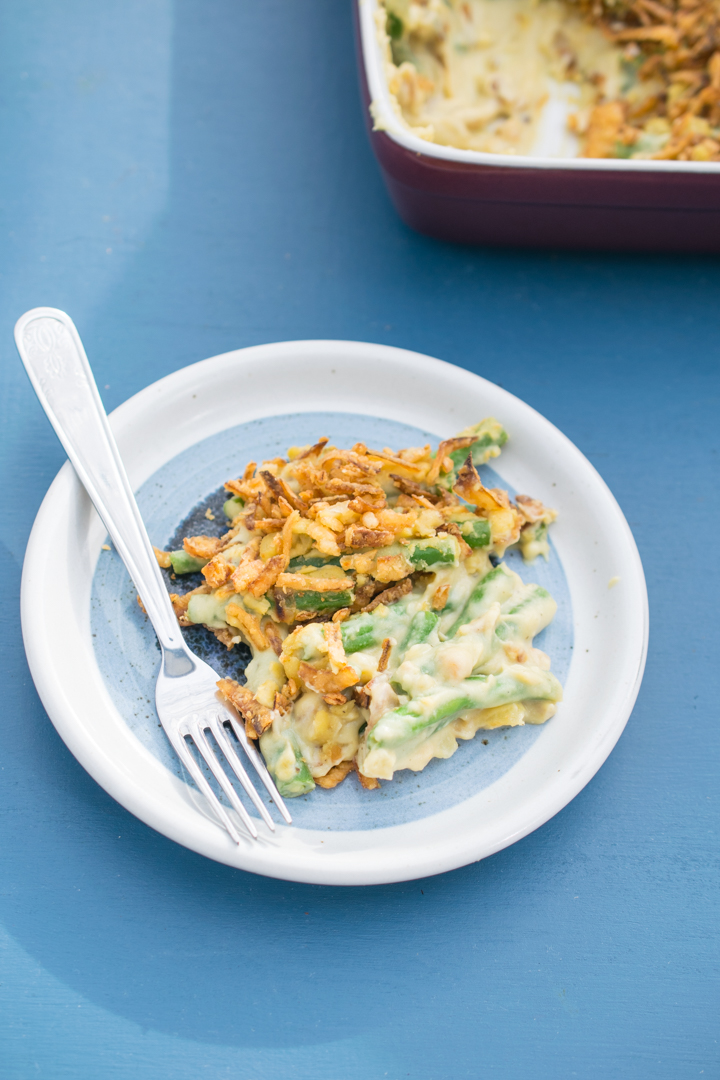 I’ve seen some people make their own crispy onions, but why would you mess with perfection? Store-bought crispy onions are accidentally-vegan and they’re a delight. It’s the holidays, live a little! (Said by a person who was testing this recipe in August while it was 95 degrees out).

This vegan green bean casserole is super easy to prep in advance. You can make the green bean mixture and the cream base, stir them together, and store it in the fridge. When it’s almost time to eat, give the mix another stir, stick it in a casserole dish to heat, and then sprinkle on the onions to get them golden brown. Your Thanksgiving-day prep and cleanup for this side dish can be about 5 minutes and 1 dish. 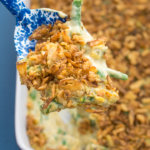 For the cashew cream base

For the vegan green bean casserole

For the cashew cream base

For the vegan green bean casserole

CRISPY ONIONS: These are usually found in the produce section of the grocery store, OR near the salad dressings. Most brands are naturally vegan; some are gluten-free. MAKE THIS SOY-FREE: Use a soy-free miso such as chickpea miso; or omit the miso. TO USE CANNED GREEN BEANS: Drain the canned green beans well. Do not further cook them in the skillet. Stir them in with the cashew cream after removing the pan from the heat. TO USE FROZEN GREEN BEANS: Thaw the frozen green beans and then drain well. Add them to the skillet as the recipe instructs, but adjust the cook time as needed. Green beans should be heated through and cooked to your liking before proceeding to the next recipe step. RECIPE VIDEO: P.S., some folks may need to disable AdBlock in order for the recipe video to be viewable. Apologies for the inconvenience!

Here are a few of my other favorite Thanksgiving recipes from the blog:

By the way, I’m blessed by your supportive comments and messages about my last post. I hope that I’ve made it easier for someone else out there to share, too.