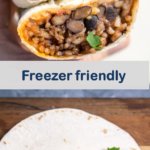 I honestly love buying frozen vegan burritos, especially from Amy’s. I often grab three or four when they’re on sale and keep them around for quick, hearty snacks or emergency work lunches. BUT, one of my goals for 2019 was to eat homemade food for more of my meals, so I spent a weekend in January making dozens of vegan burritos, freezing them and reheating them. For science. Science and financial benefit. 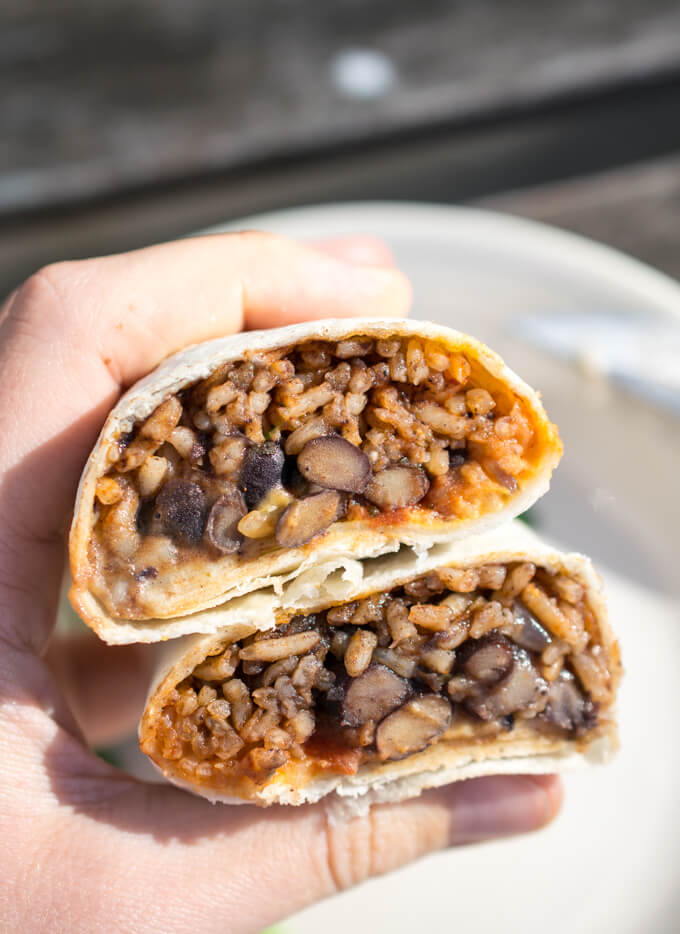 I’ve included instructions for making, freezing, reheating, and customizing your own homemade vegan burritos. Making my base recipe will save you an average of $2.10 per burrito as compared to store-bought burritos.

(Optional: You know me, I can’t get enough of my vegan cauliflower queso, so I made a batch of that too and I drizzled a little bit on each burrito. I also added some fresh cilantro, which I feel good about because I recently learned that just because I love cilantro, doesn’t mean I’m not a supertaster.) 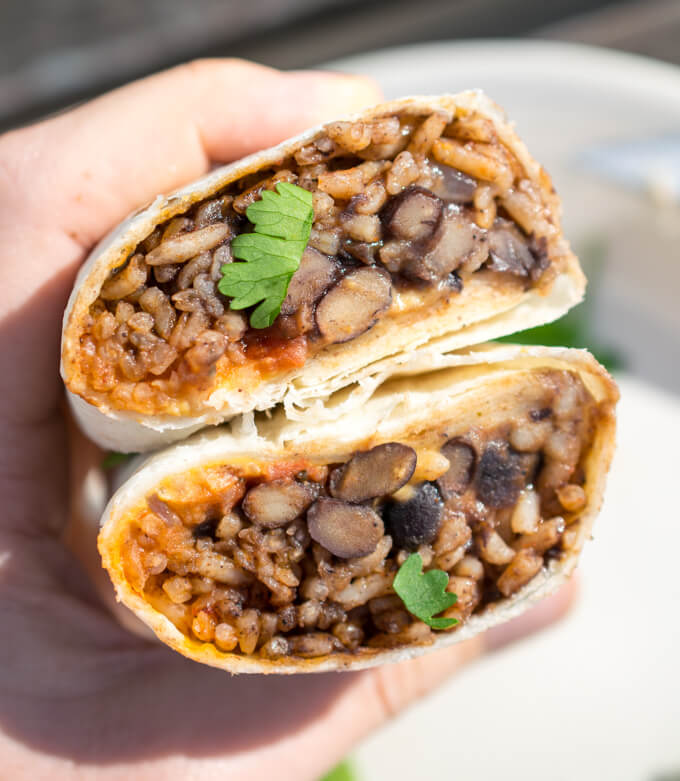 With the basic bean-and-rice filling, you’ll need to buy the ingredients for those recipes along with a package of tortillas. Those recipes made enough for 14 burritos. The current price for an Amy’s vegan burrito at my local supermarket is $3.19. I went through my receipts and my total cost to make 14 burritos was $11.12*, which means…

The cost per burrito of my homemade recipe is approximately $0.79. And they said being vegan is expensive. It seems like the price of the Amy’s burritos can vary by store, so I’ll be conservative with my estimate and round down the price to $2.89, for a savings per burrito of $2.10.

Vegan burritos without an Instant Pot

You’ll notice my base recipe components for these vegetarian burritos require a pressure cooker like the Instant Pot. My stovetop renditions are coming soon, but in the meantime, I’ll point you to these stovetop black beans and this stovetop Mexican rice (substituting vegetable bouillon for the tomato bouillon). Both recipes make the same quantity as mine, so you will be able to make the same number of burritos. 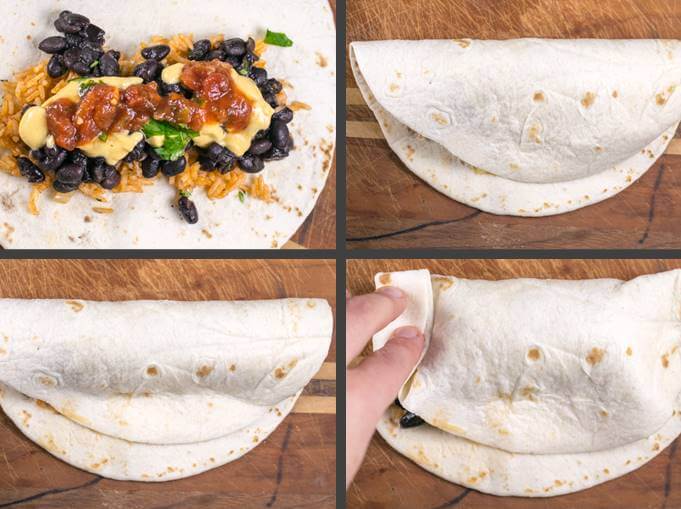 Add about 1/2 cup of filling. Fold the tortilla over the filling. Cinch it down, then fold the sides, and finally, roll up the burrito.

Regardless of the cooking implement used, making the black beans from scratch is pretty crucial to the money-saving element of these burritos. You’ll nearly quadruple the cost of your beans if you buy them canned, so while you’ll still come out ahead of freezer aisle vegan burritos, the margin will be a lot slimmer. Food for thought.

While I’ve kept these very no-frills to get you started, you can add whatever fillings you like to your vegan freezer burritos. You’ll be most successful if you follow my same folding and freezing instructions, and keep the amount of filling to about 1/2 heaping cup total per tortilla. Here are a few ideas for changing it up:

The possibilities are endless! Just take care not to use anything that’s too watery or sharp (for lack of a better word). You don’t want the filling to seep out while you’re reheating the frozen burritos later. Also, if you’re going to be freezing and microwaving the burritos, I don’t recommend adding avocado or guacamole, but if you’re eating them fresh you certainly can.

Some people are going to take issue with my tortilla-on-rice combo, and I’m fine with that. I include plenty of carbs as part of my healthy diet. I don’t offer nutritional advice here on Yup, it’s Vegan. I won’t health shame any person (unless that person is making erroneous and dangerous health claims that aren’t evidence-based). 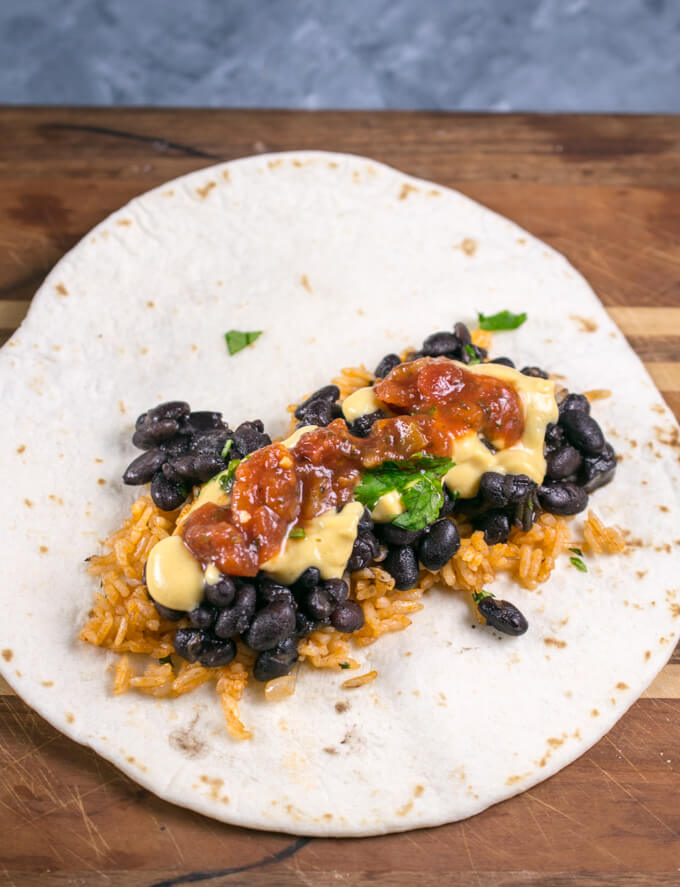 Anyway, if you’re planning, as I did, to eat these bean burritos for lunch for like a week straight, you might want to consider how they fit in to your overall diet and whether they are meeting your vitamin and nutrient needs.

Depending on your specific health and nutrition goals, you may consider some swaps, changes or additions such as the following: 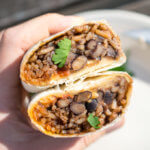 GLUTEN-FREE: I tried out the Mission gluten-free tortillas so that Brent could get in on the burrito fun. Sadly, those tortillas were terrible, breaking at every turn when I tried to fold them. If anyone knows of better options, let us know in the comments! NO INSTANT POT: In the blog post I link to stovetop recipes that can be used instead. OTHER MIX-INS: Feel free to mix and match the filling, just try to keep the amount of filling to about 1/2 cup. I share many more suggestions in the blog post. NUTRITION COMPARISON: One Amy's non-dairy burrito has 310 calories, 52g carbohydrates, 10g protein, 8g fat, and 8g fiber. My vegan burritos are higher protein, lower fat, and higher fiber.

*My price calculations include the full cost of purchasing everything for these recipes, which actually includes more than is needed of the rice, tomato paste, tortillas, and garlic, which would make the average cost even lower if accounted for. One exception is that I used Budget Bytes‘s method for calculating the cost of spices and oil. Dry spices are calculated as $0.10 per teaspoon, and oil as $0.16 per tablespoon.

Want more of these Shannon-versus-the-freezer-aisle posts? Let me know in the comments or on social media! This vegan burrito breakdown was a ton of work but I would do it every day if people are finding it helpful!